On 1 January 2011, MAN Nutzfahrzeuge (literally: commercial vehicles ) was renamed as MAN Truck & Bus to better reflect the company's products on the international market. [4]

From 1967 until 1977, MAN collaborated with France's Saviem, selling their light to medium duty trucks with MAN badging in Germany and certain other markets. After the end of this, a deal was struck with Volkswagen which lasted until 1993. Production of a truck using the Volkswagen LT body started in 1979 and ended in 1993 with 72,000 units produced. It was available with four engines and four wheelbases over its lifetime; there was also a 4X4 version called 8.150 FAE. FAE means "forward control" cab, all-wheel drive, single tyres so the F nomenclature means "forward control" cab. This series is usually referred to as the G90, from the most common model, but also as the "G"-series. In the United Kingdom it was originally marketed as the "MAN MT" series. The original lineup in the UK consisted of the 6.90 and the 8.90 (the first digit denoting the GVW in tonnes, the second for power in metric horsepower) and the 8.136 and 9.136. [5]

MAN replaced the G series with the L2000 and M2000 ranges. Several models of the MAN-VWCV and the VWCV LT ranges were marketed in Spain by Enasa as Pegaso Ekus, in a typical badge engineering operation. Peterbilt also offered this model with their badging, as the 200 or 265 model.

VWCV and MAN shared the project development in accordance with the collaboration agreement as follows:

MAN was responsible for:

MAN-VWCVs were built in Volkswagen's Hanover factory until other Volkswagen models took priority; they were then made at MAN AG's Salzgitter-Watenstedt factory.

Until 2007, MAN also built the badge-engineered ERF trucks for the UK market.

Neoplan Bus GmbH is a German automotive company that manufactures buses, trolleybuses and coaches. It is a subsidiary of MAN Truck & Bus SE. 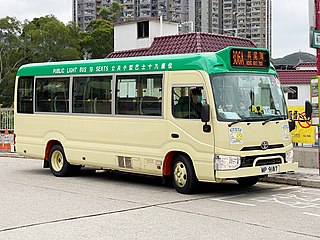 A minibus, microbus, minicoach, or commuter is a passenger-carrying motor vehicle that is designed to carry more people than a multi-purpose vehicle or minivan, but fewer people than a full-size bus. In the United Kingdom, the word "minibus" is used to describe any full-sized passenger-carrying van or panel truck. Minibuses have a seating capacity of between 8 and 30 seats. Larger minibuses may be called midibuses. Minibuses are typically front-engined step-entrance vehicles, although low floor minibuses do exist and are particularly common in Japan. Minibuses may range in price from £2000 to nearly £100,000. 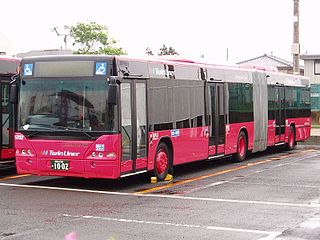 The Neoplan Centroliner is a series of low-floor transit buses which was first unveiled in 1997, and mainly built by Neoplan Bus GmbH for the European market. At the time when it was first released, it adopted contemporary technologies like Controller Area Network. 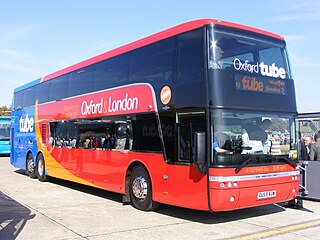 Optare is an English bus manufacturer based in Sherburn-in-Elmet, North Yorkshire. It is a subsidiary of Indian company Ashok Leyland.

A midibus is a classification of single-decker minibuses which are generally larger than a traditional minibus but smaller than a full-size single decker and can be anywhere between 8 metres and 11 metres long. While used in many parts of the world, the midibus is perhaps most common in the United Kingdom, where operators have found them more economical, and to have a sufficient number of seats compared to full size single-decker buses.

The Volvo B6 was a 5.5-litre engined midibus chassis manufactured by Volvo between 1991 and 1999. It was also available as the low-entry Volvo B6LE.

The MAN Lion's City is a range of low-floor and low-entry public buses built by German truck and bus manufacturer MAN Truck & Bus since 1996 primarily for the European market, but is also available in chassis-only variants worldwide. The name Lion's City has been used since 2006, when MAN's public bus models which had been marketed separately were gathered into one range, when also most models received a facelift. The first models to be introduced were the 12-metre low-floor intercity bus NÜ xx3 (A20) in 1996, the 12-metre city bus NL xx3 (A21) in 1997 and the articulated NG xx3 (A23) in 1998. As with former MAN bus models the power-rating made up part of the model name, giving the NÜ-series buses with power-ratings of 260 and 310 hp model names NÜ 263 and NÜ 313 respectively. The main production sites are in Starachowice and Sady in Poland, but the models have also been built in Germany, Turkey and Malaysia. Initially most of the midibus variants were manufactured by Göppel Bus in Augsburg, later Nobitz. 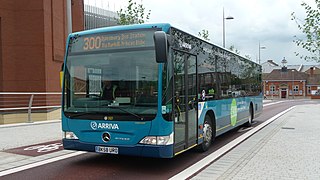 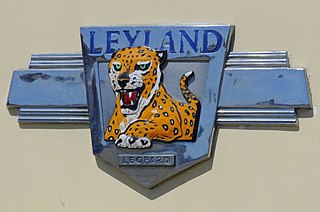 Bus manufacturing, a sector of the automotive industry, manufactures buses and coaches.

The MAN NL202 was a low floor single-decker bus built by MAN Nutzfahrzeuge from the late 1980s until 1992. It is derived from the VöV SL-II bus standard. Especially sold in Europe, in particular in Germany, it was replaced by MAN NL262.

Del Monte Motor Works, Inc.., also known as Del Monte Motors, or DMMW, is a bus and truck manufacturer, headquarters in Quezon City, Philippines. It was established in 1950. The company offers a range of truck and bus bodies for its all major brands. It is also one of the leading bus body manufacturers in the Philippines, other including Santarosa Motor Works; Almazora Motors Corporation; and Hino Motors Philippines.

The MAN NG272 was a low floor articulated single-decker bus built by MAN Nutzfahrzeuge from 1990 until 1992. It was an articulated development from the MAN NL202. Especially sold in Europe, in particular in Germany, it was replaced by the MAN NG272(2) (A11) in 1992. 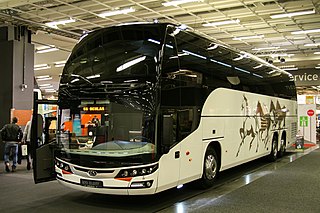 MAN Lion's Chassis is a series of modular chassis made to replace most of MAN's rear-engined low-entry, intercity and coach chassis. It was first introduced at the IAA Commercial Vehicles 2008 in Hanover. MAN prospected both two- and tri-axle low-entry, two-axle intercity and two- and tri-axle coach versions. The first of the intercity version appeared in 2008, the two-axle low-entry version in 2009 and both coach versions in 2010. The tri-axle low-entry version may have been abandoned. The models that the Lion's Chassis was set to replace weren't discontinued until the end of 2013. All chassis versions can be delivered as either a rolling chassis with shortened wheelbase for transport or as CIB.

The VöV-Standard-Bus is a standard for transit buses in Germany based on requirements by the VöV Association of German Transport Companies. The first concept was named Standard-Linienbus which resulted in multiple variants of VöV-Buses. The first generation was conceived in 1968 being in production to the mid 1980s when it was replaced by the second generation Standard-Linienbus II being in production up to 2000.

Merkavim Transportation Technologies Ltd., shortened to Merkavim, is the largest bus manufacturing company in Israel. They produce many different types of buses, including tourism coaches, urban buses, long-distance buses and minibuses. In addition to this, they also provide specialist buses, such as bullet-proof buses, prisoner-transport vehicles and VIP transport vehicles. The company was founded in 1946 and is jointly owned by Israeli vehicle-importer Mayer Cars and Trucks and by AB Volvo.