Ma became the first Chinese driver to win an FIA World Championship race when he won race two of the 2014 FIA WTCC Race of Russia. [1] He has also previously competed in the World Touring Car Championship, GP2, a few practice sessions in Formula 1, and Formula E.

Ma started his professional racing career in the 2005 Asian Formula Renault challenge with Asia Racing Team for 6 races coming 16th with the highest finish of 5th. He also competed in one race in the 2005 Italian Formula 3000 championship for team Astromega and raced in the 2006 Formula Renault 2.0 NEC championship for the same team. He also raced in the inaugural A1 Grand Prix season for Team China at the A1 Grand Prix of Nations, China at the Shanghai International Circuit, coming 17th. For the next few years he raced in European Formula 3 championships like the 2008 Spanish Formula 3 Championship and 2009 British Formula 3 championship. He then competed in the 2010 Superleague Formula in the 2010 Ordos Superleague Formula round for Team China and a year later won the China Touring Car Championship's 1600c class driver's title.

Ma was added to the HRT F1 driver development programme on 5 April 2012, [2] and made history as the first China-born driver to drive a Formula One car at an FIA-sanctioned event, a milestone described as "heralding an important step for Chinese motorsport". [3] [4] Ma also became the first driver of Chinese nationality to take part in a Grand Prix weekend when he replaced Narain Karthikeyan in the first Friday practice session of the Italian Grand Prix. [5] He was given three more chances to drive the car in Friday sessions later that year.

After HRT collapsed at the end of the 2012 season, Ma moved to Caterham, continuing the role of Friday test driver whilst racing for their GP2 Series team for the season. [6] In 2013 Chinese Grand Prix, he replaced Charles Pic to participate in the Free Practice 1 and became the first Chinese driver to drive in home Grand Prix session, but he was about 1.5 seconds off the pace to his teammate Giedo van der Garde and out of the 107% reference time to the quickest driver in Free Practice 1. Soon after the 2013 Chinese Grand Prix, Caterham team claimed that he would be replaced by Alexander Rossi for the rest of the 2013 season. In the 2013 Bahrain GP2 Series round, Alexander Rossi made his debut GP2 Series race and took a podium finish.

He made his debut GP2 Series race in 2013 Sepang GP2 Series round. [7] Later in the final stint, his lap time dropped to more than 2 minutes in every lap and finished only 21st in featured race, which is the last place in classified drivers. Later he was diagnosed with gastroenteritis leading to extreme dehydration by the medical team on track at Sepang and would not start the sprint race. [8]

In 2016, Ma replaced Salvador Duran in the 2015-16 Formula E season for Team Aguri. He retired from his first ePrix but finished the last 3 races, albeit out of the points. In the next season, Ma was signed by TeCheetah but was replaced by former Haas F1 driver Esteban Gutiérrez following a disappointing series of performances in the first three races of the season. [11]

Ma returned to Formula E in 2017 with the NIO Formula E Team for the Paris ePrix replacing Luca Filippi in a one off appearance and again in the New York ePrix replacing Oliver Turvey who was injured. He returned in 2019 to race for the NIO 333 FE Team alongside Turvey. [12] He was replaced by Daniel Abt for the Berlin rounds as travel restrictions disallowed him from traveling outside China. [13] He was not renewed for the 2020-21 Formula E World Championship by NIO 333.

Ma competed in the 2020 TCR China series in a Geely Group Motorsport-built Lynk & Co 03 TCR. He has signed for Shell Teamwork Lynk & Co Motorsport and will partner Lu Wei in the six-event series. [14] On 21 November 2020, at the Guia Race of Macau, Ma finished second in the qualifying race of the 2020 TCR China Touring Car Championship season finale, securing the drivers’ title. [15]

† As Ma was a guest driver, he was ineligible for points.‡ Team point score.* Season still in progress.

Jan Ellegaard Magnussen is a Danish professional racing driver and was a factory driver for General Motors until the end of the 2020 season. He has competed in Championship Auto Racing Teams (CART), NASCAR, the FIA Formula One World Championship and the 24 Hours of Le Mans.

Salvador Durán Sánchez is a Mexican race car driver who raced in the FIA Formula E Championship for the Amlin Aguri team. Durán has also previously competed in A1 Grand Prix, Formula Renault 3.5, and the NASCAR Toyota Series. 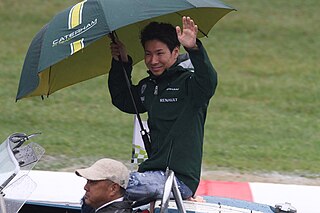 Kamui Kobayashi is a Japanese professional racing driver who, as of 2020, competes in the FIA World Endurance Championship for Toyota Gazoo Racing (GR) and in the Super Formula Championship for KCMG. He previously competed in Formula One, Formula E, the GP2 Series, and the GP2 Asia Series. Kobayashi is 2019-2020 World Endurance champion along with his team-mates Mike Conway and José María López. He is the Third FIA world champion from Japan after Toshi Arai and Kazuki Nakajima.

Campos Racing is a Spanish motor racing team, founded by former Formula One driver Adrián Campos. The team has been successful in Formula Three and the GP2 Series. 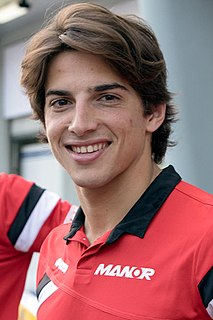 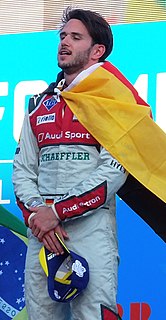 Daniel Abt is a German racing driver. He has competed in such series as the German Formula Three Championship, the GP3 Series, the GP2 Series, and won the 2009 ADAC Formel Masters championship. He competed in the first four rounds of the 2019–20 Formula E season with ABT Schaeffler Audi Sport, however he was dismissed from the team after being found to be using a ringer driver in the sport's subsequent virtual races. He completed the remainder of the season at NIO 333 FE Team replacing Ma Qinghua. He is currently on a hiatus from competitive racing, having chosen to take up a broadcasting role with Sat.1 as part of their Formula E coverage.

Alex Fontana is a Swiss racing driver of Greek descent, currently racing as a professional driver in the GT World Challenge Europe for Emil Frey Racing. He is a freelance driver with an open contract able to race for different teams and different manufacturers at the same time. When he is not racing, he works as a coach and driving instructor in Europe, America, and China, while commentating the Formula 1 Grands Prix for Swiss television with RSI.

Aurélien Panis is a professional French racing driver. He is best known for being the son of the former Formula 1 driver, Olivier Panis. From 2017 he is one of the two drivers of Zengő Motorsport - the first non-Hungarian the team has fielded in the WTCC. 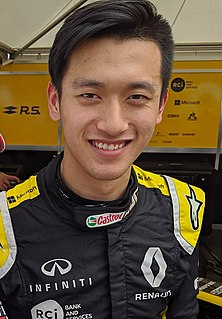 Guanyu Zhou is a Chinese racing driver, currently competing in the FIA Formula 2 Championship for UNI-Virtuosi Racing. As part of the Alpine Academy, he currently serves as the test driver for the Alpine F1 Team. He was a member of the Ferrari Driver Academy from 2014 to 2018, and served as the development driver for Formula E team DS Techeetah in 2018.

The 2017–18 FIA Formula E Championship was the fourth season of the Fédération Internationale de l'Automobile (FIA) Formula E motor racing. It featured the 2017–18 ABB FIA Formula E Championship, a motor racing championship for open-wheel electric racing cars, recognised by FIA, the sport's governing body, as the highest class of competition for electrically powered vehicles. Twenty drivers representing ten teams contested twelve ePrix, which started in Hong Kong on 2 December 2017 and ended on 15 July 2018 in New York City as they competed for the Drivers' and Teams' Championships.

Arjun Maini is an Indian racing driver, currently competing in the DTM. He has previously also competed in FIA Formula 2 Championship with Trident Racing, as well as Campos Racing.