Last updated November 01, 2021
Chinese politician and president of the Chinese Medical Association
In this Chinese name, the family name is Ma .

Ma Xiaowei (Chinese :马晓伟;born December 1959) is a Chinese physician and politician who has served as the inaugural minister in charge of the National Health Commission since March 2018. [1] Ma is also President of the Chinese Medical Association and Vice President of the Red Cross Society of China.

Ma was born in Wutai County,Shanxi in December 1959. He is part of the Han ethnic group. [2]

In April 1978,he was accepted to China Medical University. Upon graduation in December 1982,he was assigned to work at the Ministry of Health. He joined the Communist Party of China (CPC) in 1982. [3] He became a cadre at the then Ministry of Health before working for China Medical University where he later served as hospital administrator and party secretary. [4] He also became the director of Liaoning Provincial Health Department.

In October 2001 he was appointed Vice Minister of Health. [3] When the ministry was reorganized into the National Health and Family Planning Commission,he continued to serve as deputy director. In May 2015 he concurrently served as vice-president of the Red Cross Society of China. On December 15,2015,he was appointed president of Chinese Medical Association,replacing Chen Zhu. [5] On 19 March 2018,Ma was appointed director of National Health Commission at the first session of the 13th National People's Congress. [6] Ma has been leading efforts to fight the COVID-19 pandemic as well as communication around it. [7]

Wang Min is a former politician of the People's Republic of China. He successively served as Communist Party Secretary of Liaoning province,Party Secretary and Governor of Jilin province,and Vice Governor of Jiangsu province. Once considered a promising future leader in the Communist Party,Wang retired from his provincial leadership positions in 2015,before coming under investigation for corruption in 2016. He was sentenced to life in prison upon being convicted on charges of bribery and dereliction of duty.

Xu Dazhe is a Chinese politician and aerospace engineer. He was CPC Secretary of Hunan province. Previously,he was the Governor of Hunan.

Tan Qiwei is a former Chinese politician of Tujia ethnic heritage. He was the Vice Mayor of Chongqing,then the Vice Chairman of the Chongqing People's Congress. He was dismissed from office in May 2014 and placed under investigation by the Communist Party's anti-corruption body.

Ma Jian is a former Chinese security official. In January 2015,he was put under investigation by the Communist Party of China's anti-corruption agency. He served as the vice minister of State Security,and also vice president of China Law Society. He was a member of the 12th National Committee of the Chinese People's Political Consultative Conference,but is currently in prison serving a life sentence for corruption.

Huang Xiaowei is a Chinese politician currently serving as the party secretary of the All-China Women's Federation. Earlier in her career,she held positions in the Central Commission for Discipline Inspection and in Shanxi province.

The Li Keqiang Government is the Central People's Government of China from 2013. Premier Li Keqiang took office on 15 March 2013. It succeeded the Wen Jiabao government. Premier Li is ranked only second to Party general secretary Xi Jinping among 7 members of the 18th and 19th Politburo Standing Committee,top decision-making body of the Chinese Communist Party (CCP).

He Lifeng is a Chinese politician and the current Minister in charge of the National Development and Reform Commission (NDRC). Earlier in his career,he worked in Fujian province and Tianjin. He has held a number of significant posts,including Party secretary of Fuzhou,party secretary of Xiamen,party secretary of Binhai New Area,deputy party secretary of Tianijn,Chairman of the Tianjin People's Political Consultative Conference,and,since 2014,a deputy director of the NDRC.

Chen Gang is a former Chinese politician. Best known for his term in Beijing beginning in 2006,Chen played a prominent role in the construction of the venues of the Beijing Olympics and subsequent urban development projects. Elevated to the municipal standing committee in 2012,Chen seemed destined for higher office. However,he was abruptly moved to the North-South Water Transfer project in 2017. He was disgraced in 2019 and currently under investigation for graft.

Wang Jiasheng is a retired general (Shangjiang) of the People's Liberation Army (PLA) of China. He was Political Commissar of the PLA Rocket Force from 2014 to 2020. He is now vice chairperson of the National People's Congress Supervisory and Judicial Affairs Committee. 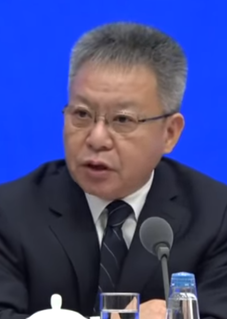 Shen Xiaoming is a Chinese politician,serving since 2017 as the Governor of Hainan. A pediatrician by training,Shen rose through the ranks in the health and education bureaucracy of Shanghai. He successively served as party chief of Pudong and vice minister of education.

Over one hundred officials of provincial-ministerial level and above have been implicated by the anti-corruption campaign in China,which began after the 18th Party Congress in 2012. The number of officials implicated below the provincial level are much higher. The tables on this list includes only officials for which a case has been initiated by the Central Commission for Discipline Inspection.

Sun Huaishan is a former Chinese politician who served as the Director of Hong Kong,Macao,Taiwan and Overseas Chinese Committee of the National Committee of the Chinese People's Political Consultative Conference. He was investigated in March 2017 by the Communist Party's anti-graft agency,suspected of corruption.

Liao Xiangzhong is a Chinese animation and digital art expert who has served as President of the Communication University of China (CUC) since March 2018. He was Vice President of CUC from November 2010 to March 2018. He is a PhD advisor and professor of Digital Media Art at CUC.

Liu Kun is a Chinese politician and the current Minister of Finance. Previously he served as director of Budgetary Affairs Commission of the National People's Congress,Vice-Minister of Finance,and vice-governor of Guangdong.

Han Dongyan is a former Chinese politician who spent most of his career in both cities of Daqing and Qiqihar in northeast China's Heilongjiang province. He was investigated by the Heilongjiang Provincial Surveillance Commission in March 2018. Previously he served as director and deputy party chief of the State-owned Assets Supervision and Administration Commission of Heilongjiang Government.

Hu Zhiqiang is a former Chinese politician who spent most of his career in northwest China's Shaanxi province. He was investigated by the Communist Party of China's anti-graft agency in June 2018. Previously he served as Party Branch Secretary of Shaanxi Provincial Health and Family Planning Commission. He was a delegate to the 18th National Congress of the Communist Party of China.

Fu Ziying is a Chinese politician currently serving as director of the Macau Liaison Office.

The National Health Commission of the People's Republic of China is a cabinet-level executive department of the State Council which is responsible for formulating national health policies. It was formed on 19 March 2018. The ministry is headquartered in Beijing. The commission is led by a Minister of cabinet rank in the state council. Ma Xiaowei is the current Minister in charge of the Commission and Party Branch Secretary. Its predecessor was the National Health and Family Planning Commission.

Xiang Lili is a former Chinese politician who spent his entire career in his home-province Hunan. As of May 2019 he was under investigation by China's top anti-corruption agency. Previously he served as vice-chairman of the Standing Committee of Hunan Provincial People's Congress. Prior to that,he was vice-governor of Hunan (2016-2018),secretary general of Hunan (2015-2016),mayor and party chief of Chenzhou (2008-2015),head of Hunan Provincial Commerce Department (2008-2008),and vice-mayor and executive vice-mayor of Changsha (1998-2007). 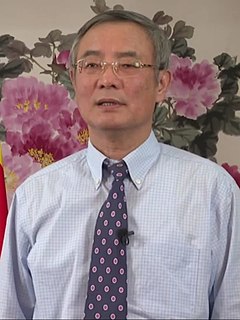 Cai Dafeng is a Chinese politician and architect currently serving as chairperson of the Central Committee of the China Association for Promoting Democracy (2017–present) and Vice Chairperson of the 13th National People's Congress Standing Committee (2018–present).