In addition, in 1926 Lohja was split into Lohjan maalaiskunta, which was known as Lohjan kunta after 1977, and Lohjan kauppala (later Lohjan kaupunki), but the two merged again in 1997.

Rovaniemi is a city and municipality of Finland. It is the administrative capital and commercial centre of Finland's northernmost province, Lapland, and its southern part Peräpohjola. It is situated about 6 kilometres south of the Arctic Circle and is between the hills of Ounasvaara and Korkalovaara, at the confluence of the river Kemijoki and its tributary, the Ounasjoki.

The 21 municipalities of the Lapland Region in Finland are divided on six sub-regions: 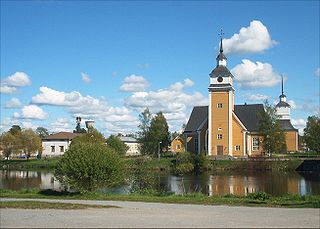 Nykarleby is a town and municipality of Finland. It is located in the Ostrobothnia region. The municipality is bilingual, with the majority speaking Swedish (89% ) and the minority Finnish (8% ).

The 14 municipalities of the Ostrobothnia Region in Finland are divided into four sub-regions. Both their location and the dominant language imply these divisions; Kyrönmaa, for example, is Finnish-speaking, whereas the others have Swedish-speakers in the majority. Most places have both Swedish and Finnish names.

Rovaniemen maalaiskunta was a municipality of Finland. It merged with the city of Rovaniemi on January 1, 2006. 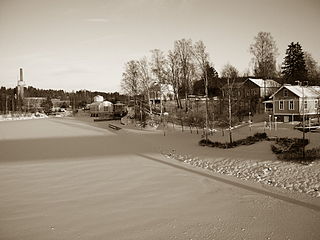 Loimaa is a town and municipality of Finland.

Loimaan kunta is a former municipality of Finland. It was merged to the town of Loimaa in the beginning of 2005.

Lohja is a city and municipality in the Uusimaa region of Finland. The city has a population of 47,518 (2017), and it covers an area of 1,109.73 square kilometres (428.47 sq mi) of which 91.78 km2 (35.44 sq mi), or 8.3 percent, is water. The population density of Lohja is 131.81 inhabitants per square kilometre (341.4/sq mi). The municipality is bilingual, with the majority being Finnish and minority Swedish speakers. Lohja has the fourth-most summer houses of any municipality in Finland, with 8,468 located within the city as of June 2018. Lohja is located near Greater Helsinki, and it benefits from a good road network. It takes less than an hour to drive from Helsinki to Lohja on the E18 motorway, which is one of the most significant main road connections in Lohja next to Hangonväylä.

Ostrobothnia is a region in western Finland. It borders the regions of Central Ostrobothnia, South Ostrobothnia, and Satakunta and is one of the four modern regions making up the historical province of Ostrobothnia.

Pedersöre is a municipality of Finland. Its seat is in Bennäs.

Finnish national road 8 runs along the western coast of Finland. The road starts at Turku, continues to Vaasa and ends in the intersection with Finnish national road 4 in Liminka, 25 km south of Oulu. It constitutes much of the length of European route E8. Cities along the road are Rauma, Pori, Kristinestad, Närpes, Vaasa, Nykarleby, Kokkola and Raahe. From Liminka, the road continues to the same direction to Oulu as road 4; road 4 to Liminka intersects it from the left.