Maamorilik (old spelling: Mârmorilik or Maarmorilik, also Black Angel Mine) is a mining site in the Qaasuitsup municipality in northwestern Greenland. Holding resources of zinc, iron, lead, and silver, [1] [2] the mine is 5 km (3.1 mi) long, [3] with its entry level situated 750 m (2,460 ft) above the sea level. [4]

Greenland is the world's largest island, located between the Arctic and Atlantic oceans, east of the Canadian Arctic Archipelago. It is an autonomous territory within the Kingdom of Denmark. Though physiographically a part of the continent of North America, Greenland has been politically and culturally associated with Europe for more than a millennium. The majority of its residents are Inuit, whose ancestors migrated from Alaska through Northern Canada, gradually settling across the island by the 13th century. Nowadays the population is largely concentrated on the southwest coast of the island while the rest of the island is sparsely populated. Greenland is divided into five municipalities — Sermersooq, Kujalleq, Qeqertalik, Qeqqata, and Avannaata. It has two unincorporated areas — the Northeast Greenland National Park and the Thule Air Base. The last one, even if under Danish control, is administered by the United States Air Force.

The mine is located approximately 24 km (15 mi) northeast of Ukkusissat in the Akuliarusikassak massif on the mainland of Greenland, on the southern shore of the Qaumarujuk Fjord, a tributary fjord of Perlerfiup Kangerlua, an inner branch of the Uummannaq Fjord. [5]

Ukkusissat is a settlement in the Avannaata municipality, in northwestern Greenland. The population of the settlement was 170 in 2010. The name means soapstone.

Perlerfiup Kangerlua is a fjord in the Qaasuitsup municipality in northwestern Greenland. It is a tributary fjord of the larger Uummannaq Fjord system.

Uummannaq Fjord is a large fjord system in the northern part of western Greenland, the largest after Kangertittivaq fjord in eastern Greenland. It has a roughly south-east to west-north-west orientation, emptying into the Baffin Bay in the northwest.

The first excavations in Maamorilik took place from 1938, possibly earlier, with operations continuing until 1945, [6] and again from 1973 to 25 July 1990 [7] when the mine was closed. During seventeen years of operation, the mine yield of zinc ore amounted to 12 mln tonnes. [3]

An ore is a natural occurrence of rock or sediment that contains sufficient minerals with economically important elements, typically metals, that can be economically extracted from the deposit. The ores are extracted at a profit from the earth through mining; they are then refined to extract the valuable element or elements.

In 2008 [7] the government of Greenland decided to reinvigorate mining activities in Maamorilik, aiming to provide an economic lifeline to the communities of the Uummannaq region, [8] keeping the relatively new Qaarsut Airport open. [9] Proceeds from mineral resources exploitation will provide Greenland with a counterbalance to the lump-sum subsidies from Denmark.

Qaarsut Airport is an airport in Qaarsut, a settlement on the Nuussuaq Peninsula in the Qaasuitsup municipality in northwestern Greenland. It is a primary airport with a gravel runway, capable of serving STOL aircraft of Air Greenland in all seasons. There is a small cafeteria in the tiny arrivals/departures hall. It is connected by a 4 km (2.5 mi) gravel road to Qaarsut and is 13.5 nautical miles northwest of Uummannaq.

Denmark, officially the Kingdom of Denmark, is a Nordic country. Denmark proper, which is the southernmost of the Scandinavian countries, consists of a peninsula, Jutland, and an archipelago of 443 named islands, with the largest being Zealand, Funen and the North Jutlandic Island. The islands are characterised by flat, arable land and sandy coasts, low elevation and a temperate climate. The southernmost of the Scandinavian nations, Denmark lies southwest of Sweden and south of Norway, and is bordered to the south by Germany. The Kingdom of Denmark also includes two autonomous territories in the North Atlantic Ocean: the Faroe Islands and Greenland. Denmark has a total area of 42,924 km2 (16,573 sq mi), land area of 42,394 km2 (16,368 sq mi), and the total area including Greenland and the Faroe Islands is 2,210,579 km2 (853,509 sq mi), and a population of 5.8 million.

Ukkusissat Heliport is the closest aerodrome to the mining site, approximately 24 km (15 mi) to the southwest. As in the 1970s, [13] supplies for the mine reconstruction are carried out via Air Greenland charter flights, now operated with the Bell 212 helicopter stationed in Uummannaq Heliport, 42 km (26 mi) away. [14]

Ukkusissat Heliport is a heliport in Ukkusissat, a village in the Uummannaq Fjord system in the Avannaata municipality in northwestern Greenland. The heliport is considered a helistop, and is served by Air Greenland as part of a government contract. There are no facilities at the helistop; check-in is administered in the Pilersuisoq communal store, the central point of the settlement.

An aerodrome or airdrome is a location from which aircraft flight operations take place, regardless of whether they involve air cargo, passengers, or neither. Aerodromes include small general aviation airfields, large commercial airports, and military airbases.

Air Greenland A/S, also known as Greenlandair, is the flag carrier airline of Greenland, jointly owned by the SAS Group (37.5%), the Greenlandic Government and the Danish Government. It operates a fleet of 32 aircraft, including 1 airliner used for transatlantic and charter flights, 9 fixed-wing aircraft primarily serving the domestic network, and 22 helicopters feeding passengers from the smaller communities into the domestic airport network. Flights to heliports in the remote settlements are operated on contract with the government of Greenland.

Heavy transport including mining products was and will be transported by ship. A port exists at the fjord. An aerial tramway was used to connect to the mine at 750 m above the fjord.

Nuuk Airport is an airport serving Nuuk, the capital of Greenland. The airport is a technical base and focus city for Air Greenland, the flag carrier airline of Greenland, linking the capital with several towns in western and south-western part of the country, including the airline hub at Kangerlussuaq Airport. With connections to Iceland, Nuuk Airport is also one of six international airports in Greenland but serves only destinations within Greenland and Iceland. International connections are made with flights to either Keflavík International Airport in Iceland or Kangerlussuaq Airport.

Ikerasak is a village in the Avannaata municipality in western Greenland. It had 238 inhabitants in 2010.

Innaarsuit is an island settlement in the Avannaata municipality in northwestern Greenland. Located on an island of the same name, the settlement had 161 inhabitants in 2010.

Ole Jørgen Hammeken − born in 1956 in Nuuk, the capital of Greenland, of Maritha and Motzflot Hammeken − is a Greenlandic explorer and actor, based in Denmark and Russia. 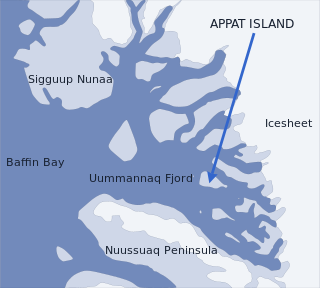 Appat Island is an uninhabited island in the Qaasuitsup municipality in northwestern Greenland. At 211 km2 (81.5 sq mi), it is one of the larger islands in the Uummannaq Fjord system, located in its north-central part. It is the site of the former settlements of Ritenbenck and Qaqortuatsiaq.

Torsukattak Strait is a strait in the Qaasuitsup municipality in northwestern Greenland.

Disko Line A/S is a passenger and freight ferry line in western Greenland. It was founded in 2004 as a small freight company.

KANUKOKA is the national association of Greenland's municipalities, led by Palle Jeremiassen. The name is an acronym formed from the first two letters of each of the constituent words of the organization's name in the Greenlandic language.

Nuussuaq Peninsula is a mainland peninsula in northwestern Greenland, located at the northern end of Upernavik Archipelago, approximately 70 km (43 mi) to the south of Melville Bay. It is much smaller than its namesake in western Greenland.

Maniitsoq Ice Cap is a 58 km × 41 km ice cap in the Qeqqata municipality in western Greenland.

Taseralik Culture Center is a cultural center in Sisimiut, a town in western Greenland, the second-largest town in the country. Located in the eastern part of Sisimiut, on the shore of the small Nalunnguarfik lake, Taseralik is the second such center in Greenland, after Katuaq in Nuuk, the capital. 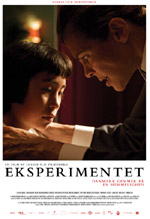 Eksperimentet is a 2010 Danish drama film written and directed by Louise Friedberg, and starring Ellen Hillingsø. The film premiered on 28 August 2010 in the Katuaq Culture Centre in Nuuk, the capital of Greenland. The release date of the film in Denmark was 9 September 2010.