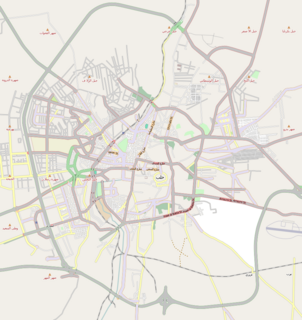 Aleppo is a city in Syria, serving as the capital of the Aleppo Governorate, the most populous Syrian governorate. With an official population of 4.6 million in 2010, Aleppo was the largest Syrian city before the Syrian Civil War; however, now Aleppo is probably the second-largest city in Syria after the capital Damascus.

His son, Nofal al-Dawalibi, is involved in the Syrian Opposition. 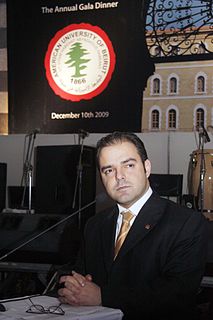 Sami Moubayed is a historian and writer, best known for his works on the modern history of Damascus from the late Ottoman period until creation of the Syrian-Egyptian union republic in 1958. In April 2017, he co-founded The Damascus History Foundation, an NGO aimed at preserving the archives of the Old City, threatened with extinction because of age, poor preservation, or neglect, becoming its founding chairman.

Muhammad Mustafa Mero is a former Prime Minister of Syria who was in office from 7 March 2000 to 10 September 2003.

The Ministry of Defense is a government ministry office of the Syrian Arab Republic, responsible for defense affairs in Syria.

Adib Bin Hassan Al-Shishakli was a Syrian military leader and President of Syria (1953–54).

Faris al-Khoury was a Syrian statesman, minister, prime minister, speaker of Parliament, and godfather of modern Syrian politics; born in Hasbaya in today's modern Lebanon. Faris Khoury went on to become prime minister of Syria from October 14, 1944, to October 1, 1945, and from October 1954 to February 13, 1955. Faris Koury's position as prime minister is, as of 2017, the highest political position a Syrian Christian has ever reached. Khoury's electoral popularity was due in part to his staunch secularist and nationalist policies. As a die-hard Syrian nationalist, Khoury never compromised on his principles and was resolutely against pan-Arabism and the ill-fated union between Syria and Egypt. Khoury opposed the short-lived union between Nasser's Egypt and republican Syria, the United Arab Republic. Through it all Faris Khoury served his country for almost 50 years. He was the grandfather of noted Syrian novelist Colette Khoury.

Dr. Saadallah Agha alkalaa is a man of science and art. Born in 1950, he studied music at the Conservatory of Aleppo, and later became a teacher there. At the same time, he studied Civil engineering at the University of Aleppo, and later traveled to France to prepare his Ph.D. in Engineering. Upon his return to Syria as a professor of engineering and computer programming at the University of Damascus, he began to write many studies and research in Arabic music, and presented hundreds of hours of music television programs, in Syrian television and most of the Arab television stations. Adept at playing qanun, he is also a member of the Syrian Associations of Engineers, Artists and Teachers, a co-founder of the Syrian Computer Society, and served as Minister of Tourism in Syria for a period of ten years. He won also numerous Syrian and Arab awards.

Ministry of Foreign Affairs and Expatriates of the Syrian Arab Republic is a cabinet ministry of Syria, responsible for conducting foreign relations of the country.

Dr. Izzat Traboulsi LL.M Ph.D.Econ, was a Syrian politician, economist, banker, and writer. He was the first governor of the Central Bank of Syria from 1956 to 1961 and served as Minister of Economy and Trade under the government of Head-of-State Nazim al-Qudsi and Syrian Prime Minister Khalid Al-Azm in 1962. His ideas and actions had an important influence on the Syrian financial institutions.

Addounia TV is a private television station based in Damascus, Syria since March 23, 2007. The station is described by some western media as "semi-official" and a "mouthpiece of the government." Addounia TV is a sister channel of Sama TV.

Abdul Rahman Khleifawi was a Syrian military officer and politician.

Nasuhi al-Bukhari or Nasuh al-Boukhari was a Syrian soldier and politician who briefly served as Prime Minister of Syria in 1939.

Mahmoud al-Ayyubi is a Syrian politician who served as Prime Minister of Syria from 21 December 1972 to 7 August 1976 under the presidency of Hafez Al-Asad.

The Syrian Martyrs' Brigades, full name Union of Martyrs of Syria Battalions and Brigades, was a unit of the Free Syrian Army and the Syria Revolutionaries Front which was active in the Idlib Governorate. The unit was formed early during the Syrian Civil War in order to fight against the Syrian Government.

Jamal Maarouf is a Syrian rebel leader who was one of the most powerful rebel leaders in northern Syria during the earlier stages of the Syrian Civil War. He is the military chief of the Syria Revolutionaries Front and leader of the Syrian Martyrs' Brigade, both part of the Free Syrian Army.

The Syrian coup d'état of 1961 was an uprising by disgruntled Syrian Army officers on September 28, 1961, that resulted in the break-up of the United Arab Republic and the restoration of an independent Syrian Republic.

As of September 2016, the number of Syrians in Saudi Arabia is estimated to be 500,000 and consists mainly of temporary foreign workers. According to the United Nations High Commissioner for Refugees' representative for the Persian Gulf region, Syrian nationals are referred to as "Arab brothers and sisters in distress". Saudi Arabia does not consider Syrians as refugees. They are provided free access to education and healthcare, and allowed to take up jobs.