Madara (Bulgarian : Мадара, pronounced  [ˈmadɐrɐ] ) is a village in northeastern Bulgaria, part of Shumen municipality, Shumen Province. Madara lies 15 kilometres (9.3 mi) east of the city of Shumen, at the western foot of the Madara plateau.

Madara is famous for the Madara National Historical and Archaeological Reserve 1.5 km (0.93 mi) east of the village, one of the 100 Tourist Sites of Bulgaria. The reserve includes Neolithic and Eneolithic findings, a Thracian settlement, Ancient Roman villa and fortress from the 2nd–5th century, medieval Bulgarian palace, pagan sanctuaries, Christian churches and monasteries and fortresses from the First Bulgarian Empire. There is also a cave monastery from the 12th–14th century. Most importantly, Madara is the location of the famous Madara Rider, an early medieval (early 8th-century) large rock relief carved by the Bulgars and also featuring several epigraphs of historic importance written in Medieval Greek; the relief most likely dates to the reign of Tervel of Bulgaria.

The large Roman villa may have been at the centre of an imperial estate under the Principate. The villa was damaged in the 3rd century and was partially rebuilt in the 4th. This later phase included at least one horreum (granary) built against the north precinct wall and included a wine press and dolia (storage jars), showing that it was used for wine production. The buildings were destroyed and abandoned in the late 4th or early 5th century. [1]

The archaeological reserve was first studied by the Hungarian archaeologist Géza Fehér and then by the Czech-Bulgarian Karel Škorpil and the Bulgarian Rafail Popov.

In medieval times, the village was a Bulgarian fortress named Matora. It was mentioned in Ottoman registers of 1481 as Matara. The modern village was founded by settlers from nearby Kyulevcha close to Kaspichan after the Liberation of Bulgaria; in the 1940s and 1950s, settlers from the Pirin and Sofia regions arrived.

The truck building works in Shumen are named Madara after the archaeological reserve. 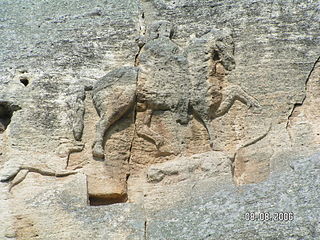 The Madara Rider or Madara Horseman is an early medieval large rock relief carved on the Madara Plateau east of Shumen in northeastern Bulgaria, near the village of Madara. The monument is dated in the very late 7th, or more often very early 8th century, during the reign of Bulgar Khan Tervel. In 1979 became enlisted on the UNESCO World Heritage List. 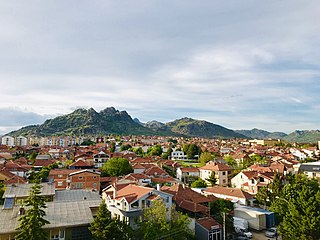 Prilep is the fourth-largest city in North Macedonia. It has a population of 66,246 and is known as "the city under Marko's Towers" because of its proximity to the towers of Prince Marko. 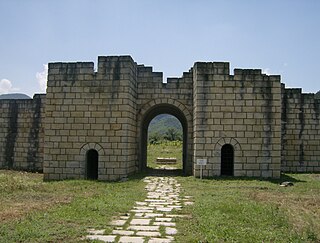 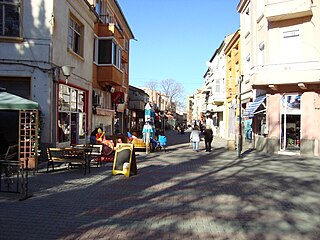 Asenovgrad is a town in central southern Bulgaria, part of Plovdiv Province. It is the largest town in Bulgaria that is not a province center. Previously known as Stanimaka, it was renamed in 1934 after the 13th-century tsar Ivan Asen II.

Batak is a town in Pazardzhik Province, Southern Bulgaria, not far from the town of Peshtera. It is the administrative centre of the homonymous Batak Municipality. As of December 2009, the town has a population of 3,498 inhabitants. 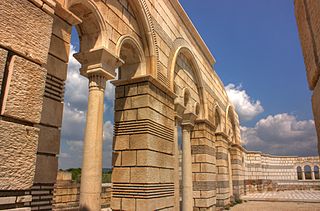 Pliska was the first capital of the First Bulgarian Empire during the Middle Ages and is now a small town in Shumen Province, on the Ludogorie plateau of the Danubian Plain, 20 km northeast of the provincial capital, Shumen. 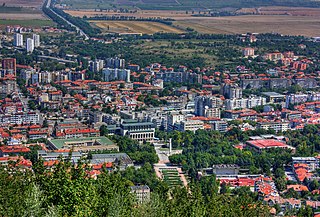 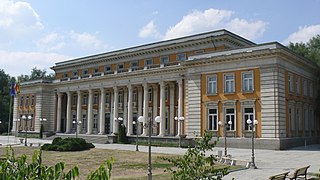 Tsarevets is a medieval stronghold located on a hill with the same name in Veliko Tarnovo in northern Bulgaria. Tsarevets is 206 metres (676 ft) above sea level. It served as the Second Bulgarian Empire's primary fortress and strongest bulwark between 1185 and 1393, housing the royal and the patriarchal palaces, and it is also a popular tourist attraction.

Lyaskovets is a town in central northern Bulgaria, located in homonymous municipality of Veliko Tarnovo Province, 10 km northeast of Veliko Tarnovo, 2 km southeast of Gorna Oryahovitsa and 5 km south of the Yantra River, north of the Balkan Mountains. Its name comes from the word leska ('hazel') or leshnik ('hazelnut'), because the tree was abundant in the area. As of December 2009, the town has a population of 10,314 inhabitants.

100 Tourist Sites of Bulgaria is a Bulgarian national movement established in 1966 to promote tourism among Bulgaria's most significant cultural, historic, and natural landmarks.

The Palace of Omurtag or Aul (Aulē) of Omurtag is an archaeological site in northeastern Bulgaria dating to Late Antiquity and the Early Middle Ages located near the village of Han Krum in Shumen Province. The site has been pinpointed as the location of a fort and palace of Omurtag, ruler (kanasybigi) of the First Bulgarian Empire in 815–831, as mentioned in the Chatalar Inscription of 822. Earlier structures in the vicinity of the fortress have been identified as the Arian episcopal see of a Gothic bishop.

Shumen Municipality is a municipality (obshtina) in Shumen Province, Northeastern Bulgaria. It is named after its administrative centre - the city of Shumen which is also the capital of the province.

Krivnya is a village in northeastern Bulgaria, part of Vetovo Municipality, Ruse Province. Krivnya is picturesquely situated in the valley of the Beli Lom River in the western part of the Ludogorie located in the hilly Danubian Plain (Bulgaria). The village is surrounded by rock formations, among which the river meanders and divides the village into two parts. In the past the river flowed slowly making a big curve and forming a sort of peninsula. In the last century (1959) an artificial correction of the riverbed is made by using of explosions and the rock formation is "cut." Today this place is known as " Prosyakata." The altitude of the area ranges between 100 and 200 meters. Relief, except the rocky formations around the river is favorable for agriculture. The climate is continental with hot summers and cold winters. The village is located 3 km from the Ruse-Varna railway line and between the towns of Vetovo and Senovo, Ruse Province. 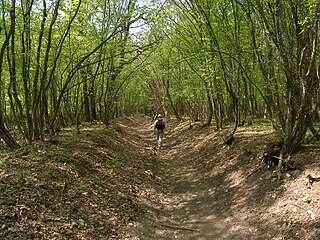 The Shumen Plateau Nature Park is located in the Shumen Plateau of the northern province of Shumen of Bulgaria, the highest plateau of the Danubian Plain. The Park encloses the Bukaka Reserve Forest, which is known for indigenous Fagus sylvatica Fagus sylvaticamoesiaca forest. This Park was declared a National Park in 1980 and a Nature Park in 2003 to conserve its ecosystems and floral and faunal biodiversity, and to preserve its tableland landscape together with many tourist sites such as the Shumen fortress, the Monument to 1300 Years of Bulgaria, cave monasteries, and surface and underground karst caves. The park has the first thematic educational trail in the Karst Nature Park, constructed as part of a project titled "Natural Park of Shumen Plateau" with funds provided by the EU Cohesion Fund and the Republic of Bulgaria; the trail is integral to the Operational Program "Environment 2007–2013".