Madhav Krishnaji Mantri pronunciation  (help·info) (1 September 1921 – 23 May 2014) was an Indian cricketer who played in four Tests from 1951 to 1955. Born in Nasik, Maharashtra, he was a right-handed opening batsman and specialist wicket-keeper who represented Mumbai. He captained Mumbai to victory in three Ranji Trophy finals: 1951–52, 1955–56 and 1955–56. He captained Associated Cement Company to victory in the Moin-ud-Dowlah Gold Cup Tournament in 1962–63.

Mantri played his first Test against England in India in 1951–52 and toured England with the Indian team in 1952 (playing two Tests), and Pakistan in 1954–55 (one Test). His highest score was 200 for Mumbai in their victory over Maharashtra in a semi-final of the Ranji Trophy in 1948–49. [1] It was the highest of nine centuries in a match in which 2376 runs were scored, which is still a record in first-class cricket. [2]

He was among the four victims (others being Pankaj Roy, Dattajirao Gaekwad and Vijay Manjrekar) in India's miserable 0–4 start in the second innings of the Headingley Test of 1952 with Fred Trueman playing havoc.

Mantri was the uncle of former Indian cricket captain Sunil Gavaskar. Until his death, he lived in Hindu Colony, Dadar, Mumbai, and was the oldest living Indian Test cricketer. He suffered a heart attack on 1 May 2014 and was hospitalized at a private clinic. He died following another heart attack on 23 May 2014. [3] 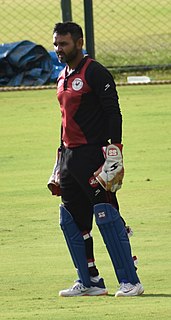 Parthiv Ajay Patel is an Indian cricketer, wicketkeeper-batsman, and a member of the Indian national cricket team. He is a left-handed batsman. He plays for Gujarat in domestic cricket.

Dattajirao Krishnarao Gaekwadpronunciation (help·info) is a former Indian cricketer. He appeared in 11 Test matches, toured England in 1952 and 1959 and West Indies in 1952–53. He captained the Indian team in the 1959 tour. As a batsman Gaekwad "possessed a sure defence and delightfully crisp shots especially through the covers". He was also an occasional leg spin bowler. As of 2018, he is India's oldest living Test cricketer.

Gulabrai Sipahimalani "Ram" Ramchandpronunciation (help·info) was an Indian cricketer who played for the national team in 33 Test matches between 1952 and 1960. In his only series as captain, he led India to its first win against Australia. According to Wisden Asia, he was one of the first cricketers to have endorsed commercial brands.

Madhusudan Ramachandra Regepronunciation (help·info) was a former Indian cricketer who played in one Test in 1949, against West Indies.

Mian Mohammad Saeed was a Pakistani cricketer, born in Lahore. 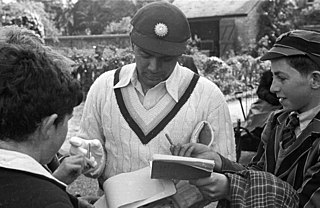 Bhausaheb Babasaheb Nimbalkar, usually known as B. B. Nimbalkar, was an Indian cricketer, best known for his score of 443 not out during the 1948–49 Ranji Trophy, which remains the highest score, and the only quadruple century, in Indian first-class cricket. His score remains the highest by a cricketer not to have played in Test Cricket.

N. Kannayiram was a cricketer who played first-class cricket in India from 1948 to 1956. He toured the West Indies in 1952-53, but did not play Test cricket.

Duvvarapu Siva Kumar is an Indian cricketer who plays for Andhra cricket team. He is a bowling all-rounder who bats right-handed and bowls right-arm fast-medium. He was a member of the India Under-19 cricket team that won the 2008 ICC Under-19 Cricket World Cup. He was the third-highest wicket-taker of the 2014–15 Ranji Trophy.

Anil H. Lashkari was an international cricketer who represented the U.S. national team between 1963 and 1979. He was born in India, and played first-class cricket for Gujarat and West Zone before emigrating to the United States. At the age of 44, he captained the U.S. at the 1979 ICC Trophy, playing alongside his son.