Magical Girl Pretty Sammy (魔法少女プリティサミー, Mahō Shōjo Puriti Samī) is a Japanese original video animation (OVA) series produced by AIC and Pioneer LDC, and released from 1995 to 1997 as three videos. [2] It features character Sasami from the Tenchi Muyo! series as a magical girl, and is noted for recasting the Tenchi Muyo! characters in new roles. It has been dubbed into English by Pioneer USA. [3] It also spawned two television series - Magical Project S , and Sasami: Magical Girls Club .

Magical Girl Pretty Sammy originated not in animation but in voice drama, beginning in 1993 with the release of Tenchi Muyo! Ryo-ohki CD Special 1 (Creation of the Universe Journey Across Space-Time). Here, Washu's newest invention, the Dimensional Controller, is glitched by the girls, creating several parallel Tenchi! worlds. Stories from the drama would later be adapted for Tenchi Universe's "Time and Space Adventures" arc (episodes 11-13). A second CD release, Tenchi Muyo! Ryo-ohki's Christmas, incorporated ideas revisited again in the series, drawing on tsunami as the source of Pretty Sammy's magical powers.

The music video for "Pretty Sammy, the Magical Girl", originally part of the Tenchi Muyo! Soundfile, marked Pretty Sammy's anime debut. After having a kiss between her and Tenchi interrupted by the villainous Kiyone, Sasami must transform into her magical alter-ego to save her love and teach his kidnappers a lesson. Though the Soundfile was never released officially in the U.S., this short can be seen during the end credits of the Mihoshi Special .

The Mihoshi Special OVA was the first time Sammy was ever featured as a full-fledged character in the animated medium, and after her appearance in Episode 12 of Tenchi Universe (Tenchi Muyo! TV: Time and Space Adventures Part 2) in a costume that more resembles Sailor Moon's than her original outfit, the magical girl would go on to star in OVA specials and television series of her own.

Sasami Kawai is a cute young Japanese girl who is asked by magical queen-to-be Tsunami of Juraihelm to become "Magical Girl Pretty Sammy", a champion of justice. She is constantly harassed by Pixy Misa, an evil, but friendly magical girl created by a rival candidate for queen of the magical world, Ramia. Sasami is unaware that Pixy Misa is actually her best friend, Misao Amano, who herself is unaware of the transformation forced on her via hypnosis by Ramia's brother, Rumiya.

Collectively, the various Pretty Sammy vehicles spoof the magical girl genre of anime (particularly Sailor Moon , with the "champion of justice" theme), using the characters from AIC's popular Tenchi Muyo! series. Ryo-Ohki (who is a male in both of the Pretty Sammy series, but a female in Tenchi Muyo! material) is Pretty Sammy's assistant and plays the same role that Luna (of the Sailor Moon series) had done, including keeping the fact he could talk a secret.

Both the OVAs and the TV series are notable for the quality of the musical tracks. Many of the tracks are parodies of popular karaoke tunes.

The other major characters of Tenchi Muyo! appear in various roles in the OVA. They include: Tenchi, Washu, Mihoshi, Kiyone, Ayeka, and Ryoko. 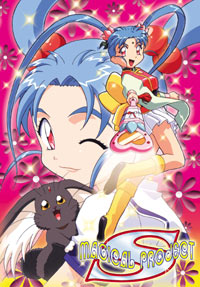 Magical Project S, known in Japan as Pretty Sammy, is a 26-episode anime television series produced by AIC and Pioneer LDC, airing in Japan from October 1996 to March 1997.. It is based on the Pretty Sammy character and the OVA series. The series was released in the United States on VHS in 1999 and on DVD in 2002, only in a subtitled format. All instances of the word "Sexy" were changed into "Lovely" in some episodes.

Chisa Yokoyama is a Japanese actress, voice actress and singer from Tokyo, Japan. She was affiliated with Arts Vision but has since founded her own voice company called Banbina. When she was a high school student, she was an assistant of Jump Broadcasting Station of Weekly Shōnen Jump (1988–1996). Some of her major roles are Sasami Masaki Jurai, Ryoko Subaru, Lucrezia Noin and Sakura Shinguji. She married musician Chaka from the band Tripolysm and their first child was born in September 2015.

Michie Tomizawa is a Japanese actress, voice actress and singer born in Maruko, Nagano Prefecture and raised in Shinmachi, Gunma.

Yūko Mizutani was a Japanese actress, voice actress, narrator and singer from Ama District, Aichi. Throughout her career, she worked with Production Baobab, and was working with Aoni Production at the time of her death. Mizutani was best known for her anime voice roles of Sakiko Sakura in Chibi Maruko-chan, Mihoshi Kuramitsu in Tenchi Muyo! and Pinoko in Black Jack. She also portrayed Excellen Browning in Super Robot Wars, Sora Takenouchi in Digimon Adventure, Leina Stol in Machine Robo: Revenge of Cronos, and Sarah Zabiarov and Cheimin Noa in Mobile Suit Zeta Gundam. Mizutani was the official Japanese voice actress for Minnie Mouse, and voiced her in the Kingdom Hearts franchise. 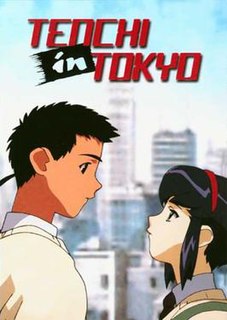 Tenchi in Tokyo is a Japanese anime television series animated by AIC and aired on TV Tokyo from April 1 to September 23, 1997. It is the third installation of the Tenchi Muyo! line of series, preceding Tenchi Muyo! GXP and succeeding Tenchi Universe. The show was localized in North America by Geneon Entertainment and aired on Cartoon Network from August 25 to September 29, 2000.

Jack Fletcher is an American voice actor, casting director, writer and voice director. He has done voice casting and direction for many high-profile anime and video game projects.

Tenchi Universe is a Japanese anime television series animated by AIC and produced by Pioneer LDC. It is loosely based on the first six episodes of the Tenchi Muyo! Ryo-Ohki OVA series. The series premiered on April 2, 1995 in Japan and concluded its airing on September 24, 1995. The series aired in the United States on Cartoon Network's cartoon block Toonami on July 20, 2000 and ended on August 24, 2000. Two featured films came from this canon, Tenchi the Movie: Tenchi Muyo in Love and Tenchi Forever! The Movie. Funimation announced distribution of the series, along with several other Tenchi properties, on July 2, 2010 at Anime Expo. 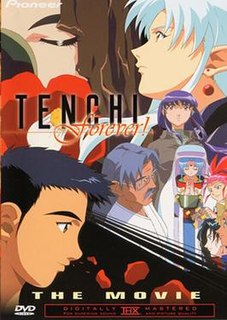 Tenchi Forever!, also known in Japan as Tenchi Muyo in Love 2: Distant Memories, is a 1999 Japanese anime film based upon the popular Tenchi Muyo! series, and was directed by Hiroshi Negishi. It was released in America under the title Tenchi Forever!, possibly because it was to be the last Tenchi Muyo!-branded product created.

Tenchi Muyo! Ryo-Ohki, known as simply Tenchi Muyo! in North America, is a collection of Japanese OVAs created by Masaki Kajishima and animated by AIC. Initially released in 1992, it marked the beginning of the Tenchi Muyo! franchise, composed of several manga, OVAs, TV series, and other related media. The first two OVA series were later licensed and distributed in North America by Pioneer Entertainment, with Funimation taking over the rights for the third series, and later taking over the rights for the first two OVAs. In 2020, Crunchyroll acquired worldwide streaming rights for the fourth and fifth seasons of the OVA. 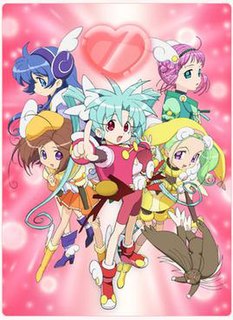 Sasami: Magical Girls Club is a magical girl anime which features the rather familiar likenesses of Sasami and other characters of the Tenchi Muyo! franchise, specifically those of Pretty Sammy. However, this series is not in the same continuity as the Pretty Sammy anime titles. The animation style is different and the story is set in an alternate universe.

Ellen Gerstell is an American voice actress. She is most known for providing the voice of Rapture in Jem and Mihoshi Kuramitsu in the Tenchi Muyo! franchise.

Tenchi Muyo! Game Hen, also known as Tenchi Muyo! RPG, is a Japanese role-playing strategy game developed by Banpresto for the Super Famicom, released on October 27, 1995. It was licensed by AIC and the now former Pioneer LDC. While Tenchi Muyou! Game Hen was never officially translated and released for international consoles, the latter dumped ROM image of the game was hacked and translated into English on two occasions. Lina`chan, Nuku-Nuku & Filia's Translations, or LNF, released their functional iteration in 2000, albeit some bugs and textual imperfections.

Ai Tenchi Muyo! (愛・天地無用！) is a Japanese anime series produced by AIC. The series is the 6th installment of the Tenchi Muyo! franchise and is sponsored by the city of Takahashi, Okayama in order to promote tourism for the city, and several new characters are based upon the legend of Momotarō and his companions. It was also created to commemorate the franchise's 20th anniversary and a revival project. The anime series aired on Tokyo MX beginning in October 2014, and consisted of 60 four-minute episodes. The series was directed by Hiroshi Negishi, who previously directed Tenchi Universe and its two sequel films, with Suzuhito Yasuda providing the new, updated character designs. Many of the voice actors from the original franchise returned, with the exception of Ayeka, who is now played by Haruhi Nanao. Negishi has stated that the plot is adapted from an unproduced sequel to Tenchi Forever!, though the absence of the character Kiyone Makibi makes continuity with Tenchi Universe dubious.