Mahakali (Nepali : महाकाली अञ्चल Listen  (help·info)) was one of the fourteen zones located in the Far-Western Development Region of Nepal, covering an area of 6,205 km2 in the most western part of the country. It stretches along Nepal's far western border with India, marked by the Kali River or Mahakali River.

In 2015 Nepal discontinued use of zone designations in favor of provinces. The zone formerly known as Mahakali is now part of Sudurpashchim Pradesh.

Mahakali's headquarters is Bhimdatta (formerly called Mahendranagar) in Kanchanpur District. The zone covers the Himalayan range including Api Peak in the North, Hill valleys, Inner Terai valleys such as Patan Municipality in Baitadi District in the center and the outer Terai in the South. The name of this zone is derived from the Kali River.

The boundary of this region was Kali river on the west and Seti Zone on the east. After the Sugauli Treaty (also spelled Segowlee) was signed on December 2, 1815 and ratified on March 4, 1816, between the British East India Company and The Kingdom of Nepal; Kali river which originates from Limpiyadhura, became the international boundary with the United Provinces of British India (now Uttarakhand, India). The coldest area in the zone is Byash and the hottest is Kanchanpur. The Api Himalayas lie in this zone from where Chameliya river originates.

Mahakali is divided into four districts:

The largest city in the Mahakali Zone is Bhimdatta (or Bhim Datta, formerly called Mahendranagar), which is also the headquarters of Kanchanpur District. Other main towns of Mahakali Zone are Dashrathchand, Patan (Baitadi) and Darchula Bajar.

The Amargadhi, the district headquarters, is named after General Amarshing Thapa (a famous Gorkha General) who formed a fort to expand Gorkha Empire capturing Kumaoun state after had defeated in a previous war with Kumaoun during 1790 A.D.

Rajghat is also a famous city of Kanchanpur District. It is located at Raikawar Bichawa VDC.

There are 3 municipalities in Kanchanpur District.

Mahakali Zone hosts the Sukla Phanta Wildlife Reserve in Kanchanpur District in the Terai, which covers an area of 305 km2 and surrounded by a buffer zone of 243.5 km2. [1] 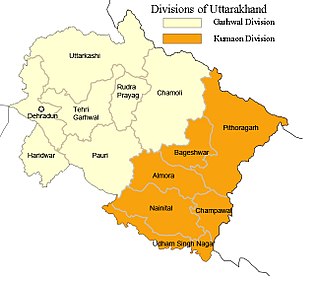 Baitadi District, historical name “Bairath” (बैराथ), a part of Sudurpashchim Pradesh, is one of the 77 districts of Nepal. It is a Hill district. Baitadi, with Dasharathchand as its headquarters, covers an area of 1,519 km2 (586 sq mi) and has a population of 250,898 according to the census (2011). The Baitadi district entails 56 village development councils (VDCs) and two municipality. Baitadi falls into the farthest western regional district of Nepal touching Jhulaghat, India, Nepal's neighboring country, to its border.

Darchula District (Nepali: दार्चुला जिल्ला Listen , a part of Sudurpashchim Pradesh, is one of the nine districts of province and one of seventy-seven districts of Nepal. The district, with Khalanga, Mahakali as its district headquarters, covers an area of 2,322 km2 and has a population of 133,274. Darchula Lies in the west-north corner of the country.

Kanchanpur District, a part of Sudurpashchim Pradesh in the Terai plain, is one of seventy seven districts of Nepal. The district, with Bhimdatta as its district headquarters, covers an area of 1,610 square kilometres (620 sq mi) and had a population of 134,868 in 2001 and 171,304 in 2011. It is located in south-western of Nepal. It is bordered by Kailali district in the east, Dadeldhura district in the north and with India in the south and west.

Mahakali may refer to: 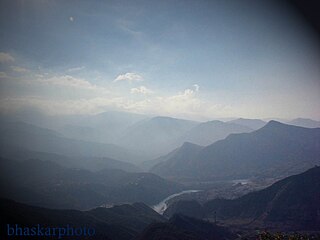 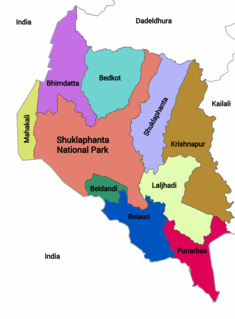 The Sharda River, also called Kali River and Mahakali River, originates at Kalapaani in the Himalayas at an elevation of 3,600 m (11,800 ft) in the Pithoragarh district in Uttarakhand, India. It flows along Nepal's western border with India and has a basin area of 14,871 km2 (5,742 sq mi). It joins Ghaghra River, a tributary of the Ganges. It takes the name Kali River from the union of the two streams at Gunji as it flows through the hills. After Brahmadev Mandi near Tanakpur, it enters the Terai plains, where it is called Sharda River.

Baitada or Baitadeli also Soradi is referred to the people of Baitadi district, of Nepal and also one of the dialect of Kumauni language spoken in the Baitadi District of Nepal or similar language spoken in other area like Darchula, Bhajhang, Dadeldhura, kanchanpur and kailali Districts of Nepal. Large number of population originally from Baitadi living in the adjoining area of Pithoragarh District of uttarakhand like Dharchula, Baluwakot, Askot, jauljibi, Dauda, Sunkholi, jhulaghat, Pipali etc. also speaks the same dialects which G.A.Grierson has mentioned as the dialects of kumauni language. Current census (2011) has revealed that in Nepal 2,72,524 numbers of people speak Baitadeli (Baitada) dialect.

Greater Nepal is a nascent irredentist concept of Nepal extending beyond its present boundaries to include current Indian territories controlled by the Gurkha army after defeating some neighbouring kingdoms in wars fought from 1791 to 1804 but ceded to the East India Company under the Sugauli Treaty after the Gurkha king was defeated in the 1814–16 Anglo-Nepalese War. The concept of "Greater Nepal" does not include those parts of Tibet that the Gurkha army occupied very briefly after defeating Tibetans in wars fought from 1789 to 1791 but from where the Gurkha army was ejected by Chinese army which defeated the Gurkha king in 1792 Sino-Nepalese War. In 1813, this historical "Greater Nepal" extended from the Sutlej to the Teesta River, spanning 1,500 km. Rule over this expanse was brief, however, and in the aftermath of the 1814-1815 war with the East India Company the Gorkhali realm was whittled down considerably. The real time Gorkhali presence in Garhwal was for 12 years,Kumaon for 24 years,and Sikkim for 33 years. The Treaty of Sugauli, between the Gorkhali king and the Company, was ratified in 1816. It caused Nepal's rulers to lose about 105,000 km2 of territory and left Nepal as it is today, with 147,181 km2 of present total area.

The Dodhara Chandani Bridge, commonly known as Mahakali Bridge is a suspension bridge for pedestrians and at this point only about 1496.5 m long over Mahakali River in the far west of Nepal. 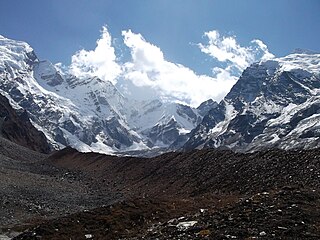 Sudurpashchim Pradesh is one of the seven provinces established by the new constitution of Nepal which was adopted on 20 September 2015. It borders the Tibet Autonomous Region of China to the north, Karnali Pradesh and Province No. 5 to the east, and the Indian states of Uttarakhand to the west and Uttar Pradesh to the south. Initially known as Province No. 7, the newly elected Provincial Assembly adopted Sudurpashchim Pradesh as the permanent name for the province in September 2018. As per a 28 September 2018 Assembly voting, the city of Godawari has been declared the capital of the Province. The province is coterminous with the former Far-Western Development Region, Nepal.

Byas is a rural municipality located in Darchula District of Sudurpashchim Pradesh of Nepal.