Mahmoud Dowlatabadi (Persian : محمود دولت‌آبادی‎, Mahmud Dowlatâbâdi) (born 1 August 1940 in Dowlatabad, Sabzevar) is an Iranian writer and actor, known for his promotion of social and artistic freedom in contemporary Iran and his realist depictions of rural life, drawn from personal experience.

Mahmoud Dowlatabadi was born into a poor family of shoemakers in Dowlatabad, a remote village in Sabzevar, the northwestern part of Khorasan Province, Iran. [1] He worked as a farmhand and attended Mas'ud Salman Elementary School. Books were a revelation to the young boy. He "read all the romances [available]... around the village". [2] He "read on the roof of the house with a lamp…read War and Peace that way" while living in Tehran. Though his father had little formal education, he introduced Dowlatabadi to the Persian classical poets, Saadi Shirazi, Hafez, and Ferdowsi. His father generally spoke in the language of the great poets.

Nahid Mozaffari, who edited a PEN anthology of Iranian literature, said that Dowlatabadi "has an incredible memory of folklore, which probably came from his days as an actor or from his origins, as somebody who didn't have a formal education, who learned things by memorizing the local poetry and hearing the local stories." [1]

As a teenager, Dowlatabadi took up a trade like his father and opened a barbershop. One afternoon, he found himself hopelessly bored. He closed the shop, gave the keys to a boy, and told him to tell his father, "Mahmoud's left." He caught a ride to Mashhad, where he worked for a year before leaving for Tehran to pursue theatre. Dowlatabadi worked there for a year before he could attend theatre classes. When he did, he rose to the top of his class, still doing numerous other jobs. He was an actor---and a shoemaker, barber, bicycle repairman, street barker, worker in cotton factory, and cinema ticket taker. Around this time he also ventured into journalism, fiction writing, and screenplays. He said in an interview "whenever I was done with work and wasn't preoccupied with finding food and so on, I would sit down and just write". [2]

He performed Brecht (e.g. The Visions of Simone Machard ), Arthur Miller (e.g. A View from the Bridge ) and Bahram Beyzai (e.g. The Marionettes ). He was arrested by the Savak, the Shah's secret police force in 1974. Dowlatabad's novels also attracted the attention of local police. When he asked what was his crime, they told him, "Nothing, but everyone we arrest seems to have copies of your novels so that makes you provocative to revolutionaries." [1] He was in prison for two years.

Towards the end of his incarceration, Dowlatabadi said "The story of Missing Soluch came to me all at once, and I wrote the entire work in my head." Dowlatabadi couldn't write anything down while in prison. He "become restless". One of the prisoners...said to him, 'You used to be so good at putting up with prison, now why're you so impatient?' He replied that "my anxiety isn't related to prison and all that came with it, but about something else entirely. I had to write this book." When he was finally released, he wrote Missing Soluch in 70 nights. [2] It later became his first novel published in English, preceding The Colonel. [3]

Kelidar is a saga about a Kurdish nomadic family that spans 10 books and 3,000 pages. Encyclopædia Iranica praises its "heroic, lyrical, and sensual" language. The story is tremendously popular among Iranians due to "its detailed portrayal of political and social upheaval." [1] Dowlatabadi spent over a decade crafting the tale. "I spent fifteen years preparing, writing short stories, sometimes writing works that were a little longer, the grounds towards what would become Kelidar," he said. [2]

In Missing Soluch , an impoverished woman raises her children in an isolated village after the unexplained disappearance of her husband, Soluch. Though the idea for the novel first came to Dowlatabadi in prison, its origins trace back to his childhood. "My mother used to talk about a woman in the village whose husband had disappeared and had left her alone. She was left to raise several children on her own. Since she didn't want the village to pity her, she would take a bit of lamb's fat and melt it and then toss a handful of dry grass or something into the pan and put this in the oven, so that with the smoke that would come out of the oven the neighbors might think that she was cooking a meat stew for her children that night," he told an interviewer. Missing Soluch was his first work translated into English. [2]

The Colonel is a novel about nation, history, and family, beginning on a rainy night when two policemen summon the Colonel to collect the tortured body of his daughter, a victim of the Islamic Revolution. [3] Dowlatabadi wrote the novel in the 1980s, when intellectuals were in danger of execution. "I hid it in a drawer when I finished it," he said. [1] Though it is published abroad in English, the novel is not available in Iran, in Persian. "I did not even want to have this on their radar," he said. "Either they would take me to prison or prevent me from working. They would have their ways." The novel was first published in Germany, later in the UK and United States. [1]

Thirst (Persian: Besmel) is a novel of the Iran-Iraq war (1980-1988). It is written from the perspectives of two Iraqi and Iranian writers. The original Persian title refers to the concept of 'besmel' explained in a footnote as: "the supplication required in Islam before the sacrifice of any animal". It is used repeatedly in the text, as the characters find it applies to them. [4]

Dowlatabadi is celebrated as one of the most important writers in contemporary Iran, particularly for his use of language. He elevates rural speech, drawing on the rich, lyrical tradition of Persian poetry. He "examines the complexities and moral ambiguities of the experience of the poor and forgotten, mixing the brutality of that world with the lyricism of the Persian language," said Kamran Rastegar, a translator of Dowlatabadi's work. [1] When Tom Patterdale translated Dowlatabadi's The Colonel, he avoided Latinate English words in favor of Anglo-Saxon ones, hoping to reproduce the effect Dowlatabadi's "rough and ready" prose. [5] Most other Iranian writers come from solidly middle-class backgrounds, with urban educations. Because of his rural background, Dowlatabadi stands out as a unique voice. He has also garnered praise internationally, with Kirkus Reviews calling The Colonel, "A demanding and richly composed book by a novelist who stands apart." [6] The Independent described the novel as "passionate," and emphasized, "It's about time that everyone even remotely interested in Iran read this novel." [7]

Safarnameh Sistan, a documentary which was made by Ali Zare Ghanat Nowi in 2011, about a trip to Sistan and meeting Balochi ethnics, illustrating the very hard life of people living there, giving information about their life style in such a dry area, is a free adaptation from Meet the Baloch People by Mahmoud Dowlatabadi. [8]

Houshang Golshiri was an Iranian fiction writer, critic and editor. He was one of the first Iranian writers to use modern literary techniques, and is recognized as one of the most influential writers of Persian prose of the 20th century.

Abbas Maroufi is an Iranian novelist and journalist. His most famous novel is Symphony of the Dead.

Ahmad E'ta, better known by his pen name Ahmad Mahmoud ; was a prominent Iranian novelist. One of his works, The Neighbors stands out as one of the most notable novels in modern Persian Literature. He was known as a distinguished social realist writer; by his works mainly concerning the lives of working class and lower class families in the urban societies of the South of Iran, especially in Khuzestan. He used to be a member of the Tudeh Party.

Shahrnush Parsipur is an Iranian writer. 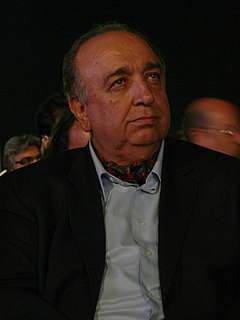 Bahman Farmanara is an Iranian film director, screenwriter, and film producer. Bahman Farmanara is the second son in a family of four brothers and one sister. The family business was Textile and he was the only son who did not join the business and went off to United Kingdom and later on to United States to study acting and directing. He graduated from University of Southern California with a BA in Cinema in 1966. After returning to Iran and doing military service, he joined the National Iranian Radio and Television.

Zoya Pirzad is an Iranian-Armenian writer and novelist. Her mother is Iranian Armenian and her father comes from a Russian background. She grew up in Tehran and is now married with two sons, Sasha and Shervin.

Prison literature is a literary genre characterized by literature that is written while the author is confined in a location against his will, such as a prison, jail or house arrest. The literature can be about prison, informed by it, or simply coincidentally written while in prison. It could be a memoir, nonfiction, or fiction.

Iraj Kaboli is an Iranian writer, linguist and translator.

Barbad Golshiri is an Iranian contemporary artist. His father was Houshang Golshiri, a famous Iranian writer and his mother is Farzaneh Taheri, a renowned literary translator. He studied painting at The School of Art and Architecture, Azad University, Tehran. He has worked both as a media artist and a critic. He works with video, digital media, installation, photography, the internet, graphic novels and Lettrism.

Fariba Vafi is an Iranian Azerbaijani writer. She was born in Tabriz on 21 January 1963 in a middle-class family. She started writing early in school and later authored short stories.

Mehdi Forough (1911–2008) was an Iranian scholar, author, dramatist, writer on dramatic arts and culture, translator, and founder of the Academy of Dramatic Arts in Tehran. A native of Esfahan, Mehdi Forough attended Danesh Sara-ye Aali in Tehran and went on to study at the Royal Academy of Dramatic Arts, London. He did graduate studies at Columbia University, NYC, where he completed his thesis, Comparative study of Abraham's sacrifice in Persian passion plays and Western mystery plays, 1954. This work was later published by the Ministry of Culture, in Tehran.

Kelidar is a novel by Mahmoud Dowlatabadi. The novel consists of ten books in five volumes. The book was written in 15 years, and includes Iranian Folklore themes. Kelidar has been translated into different languages. Kelidar refers to the name of a mountain and a village in Khorasan, where the events of the novel take place. Reza Ghassemi is an Iranian novelist and musician.

Mohammad Asef Soltanzadeh was born in Kabul, Afghanistan in 1964, moved to Pakistan, then Iran in 1985, and in 2002, to Denmark. He is a writer specialising in prose and drama. He writes primarily in Persian.

Faraj Sarkohi is an Iranian literary critic and journalist. He was cofounder and editor in chief of the Iranian magazine Adineh.

Bahman Nirumand ; born 18 September 1936 in Tehran) is an Iranian and German journalist and author.

Missing Soluch is a novel by Iranian author Mahmoud Dowlatabadi, translated from the Persian by Kamran Rastegar in 2007. It was shortlisted for the 2008 Best Translated Book Award.

The Hooshang Golshiri Literary Award is an Iranian literary award notable for being one of the few literary awards in Iran that is run by a non-governmental organization. Established in 2000, the award is sponsored by the non-profit Golshiri Foundation. The award focuses on modern contemporary Iranian literature. It is named in honor of Hooshang Golshiri, one of the most distinguished pioneers of Iranian modern fiction, who died in 2000. The first award was given in 2001.