The Maine Senate is the upper house of the Maine Legislature, the state legislature of the U.S. state of Maine. The Senate currently consists of 35 members representing an equal number of districts across the state, though the Maine Constitution allows for "an odd number of Senators, not less than 31 nor more than 35". [1] Unlike the lower House, the Senate does not set aside nonvoting seats for Native tribes. Because it is a part-time position, members of the Maine Senate usually have outside employment as well.

The Senate meets at the Maine State House in Augusta. Members are limited to four consecutive terms with each term being two years but may run again after a two-year wait.

Members of the Maine Senate

Districts are currently numbered starting with 1 from north to south. This is reversed after each decennial redistricting, which will next occur in 2021 and will go into effect beginning with the 2022 primary and general elections. The current district lines, which were drawn in 2013 and were first used in the 2014 primary and general elections, will only be in effect for 8 years rather than the usual 10 as Maine adjusts its legislative redistricting cycle to conform with most other states.

↑ denotes that the Senator first won in a special election 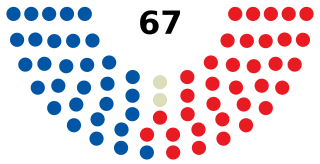 The Alaska Senate is the upper house in the Alaska Legislature, the state legislature of the U.S. state of Alaska. It convenes in the Alaska State Capitol in Juneau, Alaska and is responsible for making laws and confirming or rejecting gubernatorial appointments to the state cabinet, commissions and boards.

The Maine House of Representatives is the lower house of the Maine Legislature. The House consists of 151 members representing an equal number of districts across the state and elected via Plurality voting. Each voting member of the House represents around 8,800 citizens of the state. Because it is a part-time position, members of the Maine House of Representatives usually have outside employment as well. Members are limited to four consecutive terms of two years each, but may run again after two years.

The West Virginia Senate is the upper house of the West Virginia Legislature. There are seventeen senatorial districts. Each district has two senators who serve staggered four-year terms. The Democrats gained two seats in the 2018 elections, bringing their total number of seats to 14, while the Republicans still hold a majority with 20.

The Arkansas Senate is the upper branch of the Arkansas General Assembly. The Senate consists of 35 members, each representing a district with about 83,000 people. Service in the state legislature is part-time, and many state senators have full-time jobs during the rest of the year. During the current term, the Senate contains twenty-eight Republicans, and seven Democrats.

The secretary of state of Maine is a constitutional officer in the U.S. state of Maine and serves as the head of the Maine Department of State. The Secretary of State performs duties of both a legislative branch as well as an executive branch officer. The role oversees areas that include motor vehicle licensing, state identification, record keeping, and corporate chartering.

Michelle Louise Helene Fischbach is an American attorney and politician who is the United States Representative from Minnesota's 7th congressional district. The district, Minnesota's largest and most rural district, includes most of the western area of the state, including Moorhead, Fergus Falls, Bemidji, Detroit Lakes, Morris, Thief River Falls, Willmar, Marshall, and Alexandria.

The 2014 United States Senate election in Maine took place on November 4, 2014. Incumbent Republican Senator Susan Collins, who has served in the position since 1997, won reelection to a fourth term in office with 68% of the vote. The primary elections were held on June 10, 2014.

The 1970 Iowa State Senate elections took place as part of the biennial 1970 United States elections. Iowa voters elected state senators in 27 of the state senate's 50 districts. Due to redistricting following the amending of the Iowa Constitution in 1968 mandating single-member districts, the Iowa Senate downsized from 61 to 50 members following the 1970 election. State senators typically serve four-year terms in the Iowa State Senate.