The town had a Jewish community and it had been the center of the Hasidic Makarov dynasty, (Makariv being pronounced as "Makarov" in Yiddish.)

Makarov may refer to: 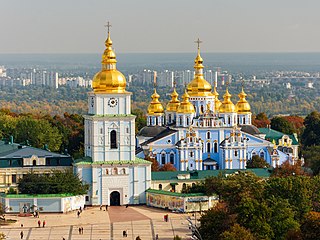 St. Michael's Golden-Domed Monastery is a functioning monastery in Kyiv, the capital of Ukraine. The monastery is located on the right bank of the Dnieper River on the edge of a bluff northeast of the Saint Sophia Cathedral. The site is located in the historic administrative Uppertown and overlooks the city's historical commercial and merchant quarter, the Podil neighbourhood. 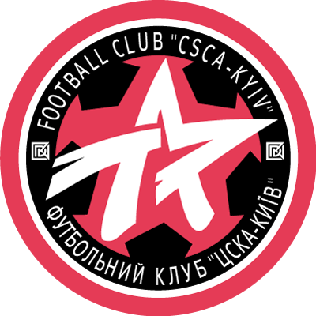 Roman Petrovych Bezsmertnyi is a Ukrainian politician, member of Verkhovna Rada (parliament) for four convocations (terms) from 1994 to 2007, deputy head of Ukrainian president's secretariat and former Ambassador of Ukraine to Belarus. Bezsmertnyi is also a former Deputy Prime Minister of Ukraine, responsible for administrative and territorial reform.

Kyiv-Sviatoshyn Raion is a raion (district) in Kyiv Oblast of Ukraine, adjacent to the city of Kyiv which serves as the administrative center for the raion. The city of Kyiv itself does not belong to the raion. Population: 210,123 (2020 est.) .

Makariv Raion is a raion (district) in Kyiv Oblast of Ukraine. Its administrative center is the urban-type settlement of Makariv. Population: 35,640 (2020 est.) .

Makarov is a Hasidic dynasty founded by the Rebbe Menachem Nochum Twerski of the Chernobyl dynasty. Makarov is the Yiddish name of Makariv, a town in present-day Ukraine. To this day, the Mekarev Shul is used in the old City of Safed for Shabbat Prayers by the Yeshiva Shalom RAv.

The Admiral Makarov National University of Shipbuilding in Mykolaiv is a higher education institution which trains specialists for the shipbuilding and allied industries of Ukraine. The university is named after Russian admiral Stepan Makarov, who was born in the city.

Kodra is an urban-type settlement in Makariv Raion (district) of Kyiv Oblast (province) in northern Ukraine. Its population was 1,756 at the 2001 Ukrainian census. Current population: 1,421 (2020 est.) .

Viktor Bannikov Memorial Tournament is annual summer association football friendly competition for junior teams that take place in various cities of Ukraine, since 1998. This tournament was created in honour and memory of the legendary goalkeeper of the USSR national football team and the first president of the Football Federation of Ukraine Viktor Bannikov (1938-2001), hence the name Memorial. The tournament was initially established in 1998 as a competition for junior teams of Ukrainian football clubs. Victor Bannikov opened his first edition. It was contested by 12 teams. DFK "ATEK" won defeating opponents from FC Dynamo Kyiv. In 1999, the tournament has received international status and was contested by 16 junior teams. In 2002, the Ukrainian football federation has decided to give more importance professional status, inviting the participation of junior national teams.

Piddubny Olympic College is a sports school in Kyiv that provides sports reserve for Olympic sports. The college also has a combined boarding middle and high school. Upon successful completion a college graduate of the school receives an undergraduate diploma in "Physical development and sport".

Korolivka may refer to several places in Ukraine:

Hruzke is a village in Fastiv Raion in the Kyiv region of north Ukraine.