Maltese Player of the Year

The Maltese Player of the Year Award is an annual award given to the player who is adjudged to have been the best of the year in Maltese football. The award has been presented since the 1954–55 season and the winner is chosen by a vote amongst the members of the players' trade union, the Professional Footballers' Association (MFA).

The first winner of the award was Floriana player Lolly Debattista, and the current holder is Matthew Guillaumier of Ħamrun Spartans. 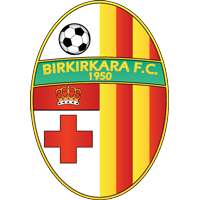 Birkirkara Football Club is a professional football club based in the town of Birkirkara, on the island of Malta. The club was formed in 1950, following the amalgamation of Birkirkara United and Birkirkara Celtic. Birkirkara currently play in the Maltese Premier League, which it has won on four occasions, most recently in the 2012–13 season.

Floriana Football Club is a Maltese professional football club in the town of Floriana that currently plays in the Maltese Premier League. In all, Floriana F.C. has won 26 national leagues and 20 FA Trophies. It is also the only team from Malta to have qualified from the qualifying rounds to the first round proper of the UEFA Champions League, in the 1993–94 season.

The Maltese Premier League, known as BOV Premier League for sponsorship reasons with Bank of Valletta, is the highest level of professional football in Malta. Managed by the Malta Football Association, the Premier League is contested by 16 teams and operates on a promotion and relegation system with the Challenge League. As of July 2021, the Premier League ranks 46th out of 55 members in the UEFA coefficient.

Carmel BusuttilMQR, nicknamed "Il-Bużu", is a Maltese former professional footballer who played as a striker. 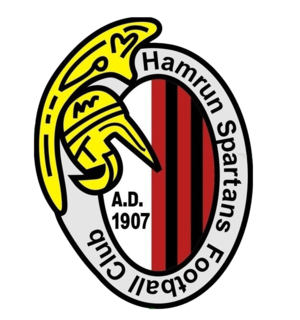 Ħamrun Spartans Football Club is a professional football club based in Ħamrun, Malta. Since being founded in 1907, Ħamrun Spartans have won a total of eight league championships while being runners-up eleven times.

André Schembri is a Maltese former footballer who played as a forward.

Żurrieq Football Club is a Maltese football club based in Żurrieq, Malta. The club currently plays in the Maltese Amateur League A. They also play in the annual Maltese FA Trophy.

At the end of each UEFA European Championship tournament, several awards are attributed to the players and teams which have distinguished from the rest, in different aspects of the game.

Andrei Agius is a Maltese footballer who plays for Hibernians as a central defender.

Raymond "Żażu" Farrugia is a football coach and former player He has been the head coach for the Malta national football team from 2 May 2018. to the end of 2019. 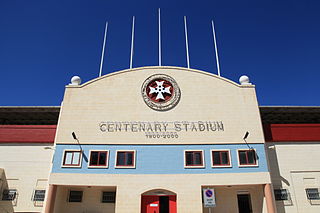 The Centenary Stadium is a stadium located in Ta' Qali, Malta. The stadium, which is situated next to the National Stadium, houses the headquarters of the Malta Youth Football Association. It seats 3,000 and serves as the home stadium of the Malta national under-21 football team. The stadium, together with three other stadiums, also hosts matches of the Maltese Premier League, Maltese First Division and Maltese FA Trophy.

Alfred Effiong is a Nigeria-born Maltese footballer who plays as a forward for Maltese club Balzan.

The 2017–18 Maltese Premier League was the 103rd season of top-flight league football in Malta. The season began on 18 August 2017 and ended on 22 April 2018. Hibernians were the defending champions, having won their 12th title the previous season.

Matthew Guillaumier is a Maltese footballer who plays as a midfielder for Hamrun Spartans and the Malta national team.

The Maltese National Amateur League is the third-highest division in Maltese football, replacing the Maltese Second Division and Maltese Third Division during the 2020–21 season following the premature end of the previous football season due to the COVID-19 pandemic.