Sogavare who is a Seventh-day Adventist, was born in Popondetta, Northern Province, Papua New Guinea on 17 January 1955 to missionary parents from Choiseul Island, Solomon Islands. He has four older brothers: Moses, Samson, John and Jacob. Later in life, Manasseh and his older brother Jacob moved to the Solomon Islands. [2]

Sogavare was Permanent Secretary of the Ministry of Finance from February 1994 to October 1996. Prior to his election to Parliament, he served as the Commissioner of Inland Revenue, Director of the Central Bank of the Solomon Islands, and Chairman of the Solomon Islands National Provident Fund. He was first elected to the National Parliament from the East Choiseul constituency in the 6 August 1997 election.

Under Prime Minister Bartholomew Ulufa'alu, Sogavare became Minister for Finance and Treasury in 1997 [1] but was dismissed from that post by Ulufa'alu in mid-July 1998. [3] Sogavare said that he was shocked at the dismissal, as he could see no reason for it and no reason was given, and he demanded an explanation. [4] A few days later, Ulufa'alu said that the decision was motivated by the need for the government to keep the numbers to stay in power. [5] In early August 1998, Sogavare withdrew his support for Ulufa'alu and his government, accusing Ulufa'alu of authoritarian and hypocritical leadership and of emphasizing stability only to protect himself. [6]

His party won only three seats in the 2001 general election, but Sogavare was re-elected to his seat in Parliament. [1]

Following the 2006 general election, Sogavare led the Solomon Islands Social Credit Party into a coalition to oust Prime Minister Allan Kemakeza's chosen successor Snyder Rini, but there was much disagreement about who should be its candidate for Prime Minister. On 18 April 2006, he received 11 of 50 votes to become Prime Minister, placing him third. He then switched his support to Rini, allowing Rini to become Prime Minister while Sogavare became part of the coalition and was named Minister for Commerce, Industries and Employment. [1]

Following Rini's resignation on 26 April 2006, Sogavare decided to attempt again to become Prime Minister. This time the opponents of Kemakeza and Rini united behind him, and in parliamentary vote on 4 May 2006, he received 28 votes, defeating the government candidate Fred Fono, who received 22 votes. Sogavare was immediately sworn in. [11] His main tasks included organizing the recovery from rioting that took place during Rini's time as Prime Minister.

On 11 October 2006, Sogavare survived a no-confidence vote in parliament; the motion, introduced by Fono, was supported by 17 members of parliament, while 28 voted against it. [12] The no-confidence vote was prompted by deteriorating relations with Australia. Sogavare had expelled the Australian High Commissioner Patrick Cole in September and defended the Solomons' suspended attorney general, Julian Moti, who Australia wanted extradited to face child sex charges there. Moti presently faces charges in the Solomons for illegally entering the country. [13] On 13 October, Sogavare threatened to expel Australia from an assistance mission in the Solomons, [14] and a week later Australian peacekeepers from the Regional Assistance Mission to Solomon Islands raided Sogavare's office (when he was not present) looking for evidence related to the Moti case. [15]

On 13 December 2007, Sogavare was defeated in a parliamentary vote of no confidence; the motion against him received 25 votes, with 22 in opposition. He remained in office in a caretaker capacity until the election of a new Prime Minister [16] on 20 December, when opposition candidate Derek Sikua was elected, defeating Patteson Oti who had been Foreign Minister under Sogavare. [17] On the same date, Sogavare became Leader of the Opposition. [1]

In 2010, Sogavare and eight other MPs established the Ownership, Unity and Responsibility Party, [18] which won three seats in the 2010 general election.

Following the 19 November, 2014 general election, Sogavere became Prime Minister for the third time. [19] On 22 September 2017 Sogavare spoke at the United Nations General Assembly. He condemned North Korea for their testing of ballistic missiles. He also condemned Indonesia for violence in West Papua. [20] On 7 November 2017, seventeen members of his Democratic Coalition for Change voted against him in another motion of no-confidence. The lawmaker who submitted the motion of no confidence, Derek Sikua, claimed that Sogavere had lost touch with reality and become fixated on conspiracy theories, while Sogavere attributed the defections to a proposed anti-graft bill, saying that some MPs were afraid it would lead to them being imprisoned. [21] [22] Sogavere remained as Acting Prime Minister until Rick Houenipwela was elected on 15 November 2017.

On 24 April 2019, he was once again elected Prime Minister with more than half the vote. There is controversy surrounding this election since a court issued an injunction just before the vote was to begin. [23] After Sogavare was re-elected there was rioting in Honiara forcing shops and offices to close. Also rioters did damage to the Pacific Casino Hotel which was used by Sogavare as his campaign headquarters. [24] [25]

On 16 September 2019 Sogavare's government's recognised the People's Republic of China, switching recognition from Taiwan after 36 years. In a statement Sogavare announced the decision as representing an advance of Solomon Islands national interests, an outcome of a bi-partisan taskforce to investigate and confirm the facts surrounding the 'One China Principle', and reporting by the Ministry of Foreign Affairs and External Trade. [26] Responding to questions about caucus unity on the decision, Sogavare presented it as "a collective agreement agreed to by all the Democratic Coalition Government for Advancement (DCGA) coalition MPs elected into the 11th parliament, conducted in a very open and transparent manner as far as government caucus is concerned". [26] The decision caused significant political and public debate in Solomon Islands. In the wake of the decision and in light of their abstaining from the parliamentary vote, several members of parliament were removed by Sogavare. Planning Minister and former Prime Minister Rick Hou claimed Sogavare lied about the process, claiming the decision was pre-determined. Hou was sacked by Sogavare on the week of 27 September, Sogavare claiming Hou had tried to bribe MPs [27] Deputy Prime Minister John Maneniaru and Education Minister Dean Kuku were terminated, with Police Minister Lanelle Tanagada opting to resign. [28]

Sir Francis Billy Hilly KCMG is a Solomon Islands politician who was the fourth Prime Minister of the Solomon Islands from 18 June 1993 to 7 November 1994. He represented the Ranogga/Simbo Constituency in the National Parliament from 1976 to 1984, and has represented the constituency again since 1993. Hilly has been Minister of Commerce, Industry and Employment since December 2007. 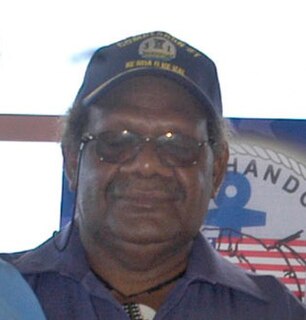 John Patteson Oti, sometimes called Patterson Oti, is a Solomon Islands politician and diplomat. He was Minister for Foreign Affairs, External Trade and Immigration from May 2006 to 22 December 2007. He is the secretary general of the Ownership, Unity and Responsibility Party, which was launched in early 2010. Since March 2012, he has been his country's High Commissioner to Fiji.

General elections were held on 5 April 2006 in Solomon Islands. No party won more than four of the fifty seats, while thirty seats went to independent candidates. A number of those subsequently formed an Association of Independent Members of Parliament, with Snyder Rini as their leader. Rini was elected Prime Minister by Parliament on 18 April, amidst "widespread street protests" in Honiara, which caused particular damage in the city's Chinatown. Rioters "alleged corruption and insisted that Mr. Rini had been unfairly favouring Chinese businessmen". While the riots ceased with the arrival of Australian and New Zealand peacekeeping troops the next day, the opposition soon lodged a motion of no confidence in Rini's premiership. Rini resigned on 26 April, having been Prime Minister for just eight days. Opposition parties united in a coalition and succeeded in having Manasseh Sogavare, of the Solomon Islands Social Credit Party, elected Prime Minister on 4 May. 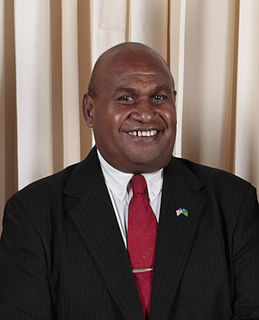 Fred Iro Fono was a Solomon Islands politician, serving as the country's Deputy Prime Minister and Minister for Rural Development and Indigenous Affairs from December 2007 to August 2010. He was a member of the People's Alliance Party and represented Central Kwara'ae Constituency in the National Parliament for thirteen years from 1997 to 2010, when he was defeated for re-election by MP Jackson Fiulaua.

Toswel Kaua was a Solomon Islands politician, several times Cabinet minister, and Deputy Prime Minister from May to November 2007. 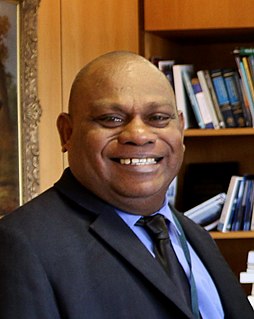 The Ministry of Finance and Treasury is a government ministry of the Solomon Islands responsible for public finances. The ministry is located in Honiara.