During his prime with Italian club A.S. Roma, Mancini was famed for his dribbling skills and use of feints, especially his step-overs. His favoured position was as right or left winger, although he was also capable of playing as a second striker or as an attacking midfielder. At international level, he made nine appearances for Brazil between 2004 and 2008, and was a member of the squad that won the 2004 Copa América.

Regarded as a promising talent, Mancini began his career in his homeland of Brazil with his hometown club, Atlético Mineiro, where he remained from 1999 to 2002. During that time he had two loan spells, at Portuguesa and at São Caetano in 2001.

He was signed by Serie B side AC Venezia in January 2003. During that time he struggled to adapt to Italian football, and was criticised by the Venezia manager for his errors, and for his habit of controlling the ball with the outside of his foot, which in Italy is considered unconventional.[ citation needed ]

Having lost Cafu, Roma needed a replacement at right-back, but with his early performances in Italy being far from convincing, many Roma fans were sceptical about his ability. However, their then-manager Fabio Capello gave the Brazilian a chance, and Mancini went on to complete a consistent first season in Serie A, the highlight being a backheel flick from a set piece in the Derby della Capitale against S.S. Lazio. [2]

In the 2005–06 season, Mancini began to find his top form, once again becoming a key player for the Roma side. Following the Calciopoli scandal, Roma qualified for the UEFA Champions League, giving Mancini the chance to play at the highest level of club football.

In the last 16 of the 2006–07 UEFA Champions League, Mancini scored a goal against Lyon after beating their defender Anthony Réveillère with several stepovers before firing the ball high into the net. That same year, Mancini also celebrated his first silverware since arriving in Italy as Roma won the Coppa Italia, beating Internazionale in the final.

In the 2007–08 season, Mancini scored eight league goals as Roma reached the quarter-finals of the Champions League and finished as runners-up in Serie A for the second year running. He did not have the best of seasons though, in what would prove to be his last in Rome.

After the appointment of José Mourinho, Mancini was signed by Internazionale for €13 million, [3] along with Ricardo Quaresma and Sulley Muntari in his maiden season. (Although Mancini was a long desired target of Massimo Moratti and ex-coach Roberto Mancini). However, he failed to become a first team regular due to his lack of consistency.

On 1 February 2010, he moved to city rivals A.C. Milan, on loan for the remainder of the 2009–10 season, with an option for them to acquire half of the player's rights at the end of the loan spell. [4] He made his debut for Milan in a scoreless draw against Bologna.

He returned to Atlético Mineiro on 5 January 2011, signing a three-year contract. [5]

In June 2012, Mancini joined Esporte Clube Bahia. He played for the team until the end of the year.

After spending 2013 unsigned with any team, in January 2014 Mancini signed with Villa Nova for their Minas Gerais state league campaign. He scored seven goals, making him the top-scorer of the league.

At the end of the state league season, Mancini signed a contract with Série B team América until December 2014.

In January 2016, the Villa Nova-MG agreed to hire Mancini for the next season. [6]

His short-lived experience as Foggia boss ended 2 September 2019, as he resigned after the first league game, a 0–1 away loss to Fasano. [8]

His nickname, Mancini, is a diminutive form of Manso (which means calm in Portuguese), [9] His composite surname (composite of father and mother, however Spanish and Portuguese culture had difference order) is Faiolhe Amantino, which the former is the misspelling of Faioli. He also holds Italian nationality through descent, via his great-grandmother Genoveffa from Veneto. [10]

He was under investigation in 2011 for rape accused by a Brazilian woman, which happened in December 2010 after a party held by Ronaldinho. [11] On 28 November 2011, he was jailed for 2 years and 8 months after being found guilty of rape by the court of Milan. [12] 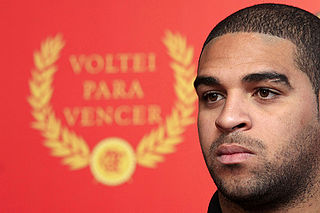 Adriano Leite Ribeiro, commonly known simply as Adriano, is a Brazilian former professional footballer. A powerful striker known for his long range left footed strikes, Adriano's career was however marked by inconsistency. One of the best strikers in the world in the mid 2000s, he had five prolific seasons in Italy with Parma and Inter Milan, earning the nickname L'Imperatore, before a decline in his performances which coincided with the death of his father. Adriano won four Scudetti for Inter Milan, and after moving back to his native Brazil he won two Brasileirão for Flamengo and Corinthians. 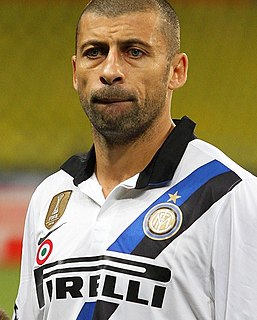 Walter Adrián Samuel is a retired Argentinian professional footballer. Samuel has been regarded as one of the best centre-backs of his generation, and as one of football's toughest defenders, with former international teammate and Inter captain Javier Zanetti referring to him as the "hardest player" he has played with. 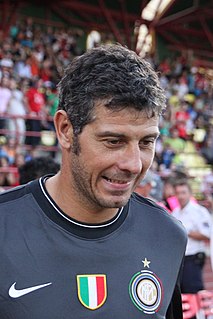 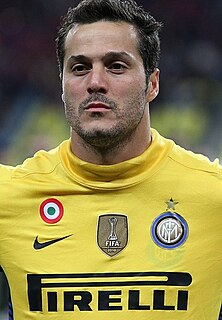 Júlio César Soares de Espíndola, known as Júlio César, is a Brazilian retired professional footballer who played as a goalkeeper.

Cristiano Zanetti is a retired Italian footballer who played as a midfielder and current football coach. He was most recently in charge of Massese.

Matteo Brighi is an Italian professional footballer who plays as a midfielder.

Nevio Scala is an Italian football sporting director, coach and former player, who currently serves as the president of Italian club Parma. Throughout his footballing career, he played as a midfielder for several Italian clubs, and won several titles during his time with A.C. Milan. As a manager, he is mostly known for his role as head coach of Parma during the club's golden age of the 1990s, which saw him lead the team from Serie B to several European triumphs.

Maicon Douglas Sisenando, known as Maicon, is a Brazilian retired footballer who played as a right-back.

Luca Castellazzi is an Italian former professional footballer who played as a goalkeeper. He serves as the team manager of Serie A club Torino.

Sebastiano Siviglia is a former Italian footballer who played as a defender. Throughout his career, Siviglia played over 250 matches in the Italian Serie A for several clubs, in particular Lazio, where he made over 150 league appearances. 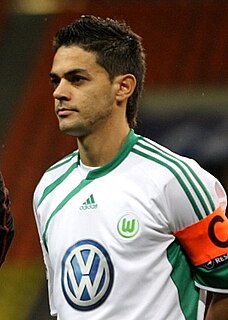 Giovanni Stroppa is an Italian football coach and former midfielder, currently in charge as the head coach of Crotone.

The 2008–09 season was Football Club Internazionale Milano's 100th in existence and 93th consecutive season in the top flight of Italian football.

Gianmarco Zigoni is an Italian professional footballer who plays as a forward for Serie B club Venezia. 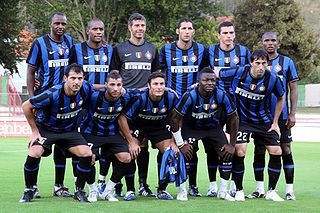 The 2009–10 season was Football Club Internazionale Milano's 101st in existence and 94th consecutive season in the top flight of Italian football.

The 2010–11 season was Football Club Internazionale Milano's 102th in existence and 95th consecutive season in the top flight of Italian football.

Gabriel Vasconcelos Ferreira, mononymously known as Gabriel, is a Brazilian footballer who plays as a goalkeeper for Italian Serie A side Lecce.

During the season 1966-67 Football Club Internazionale Milano competed in Serie A, Coppa Italia and European Cup.