Last updated April 03, 2021
This article is about the kitchen utensil. For the musical instrument, see Mandolin. For the Phil Beer album, see Mandoline (album).

A mandoline (US, /ˌmændəˈliːn,-ˈlɪn/ [1] ) or mandolin (British, /ˌmandəˈlɪn/, /ˈmandəlɪn/, /ˈmandl̩ɪn/ [2] ), is a culinary utensil used for slicing and for cutting juliennes; with suitable attachments, it can make crinkle-cuts. Its name is derived from the wrist-motion of a skilled user of a mandoline, which resembles that of a player of the musical instrument mandolin [ citation needed ].

A mandoline with various cutting blades

Close up of the cutting apparatus, set up for a .25 inches (6.4 mm) julienne cut

A mandoline consists of two parallel working surfaces, one of which can be adjusted in height. [3] A food item is slid along the adjustable surface until it reaches a blade mounted on the fixed surface, slicing it and letting it fall.

Other blades perpendicular to the main blade are often mounted so that the slice is cut into strips. The mandoline juliennes in several widths and thicknesses. It also makes slices, waffle cuts and crinkle cuts, and dices firm vegetables and fruits.

With a mandoline, slices are uniform in thickness, [4] which is important with foods that are deep-fried or baked (e.g. potato chips), as well as for presentation. Slices can be very thin, and be made very quickly, with significantly less skill and effort than would be required if cutting with a knife or other blade. [4]

A mandoline is used by running a piece of food (with some protection for fingers) along an adjustable inclined plane into one or more blades. On some models vertical blades cut to produce julienne, or a wavy blade is used that produces crinkle cuts. In these models a quarter turn to the food between passes produces dice and waffle cuts.

A mandoline can cause injury if not used correctly. [5] [6] 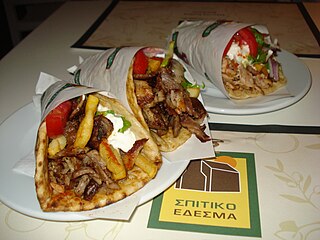 A gyro or gyros is a Greek dish made from meat cooked on a vertical rotisserie. Like shawarma and tacos al pastor, it is derived from the lamb-based doner kebab. In Greece it is prepared most often with pork or chicken, whilst beef, chicken, and lamb are common in other countries. It is typically served wrapped or stuffed in a pita, along with ingredients such as tomato, onion, and tzatziki sauce.

A hand plane is a tool for shaping wood using muscle power to force the cutting blade over the wood surface. Some rotary power planers are motorized power tools used for the same types of larger tasks, but are unsuitable for fine-scale planing, where a miniature hand plane is used. 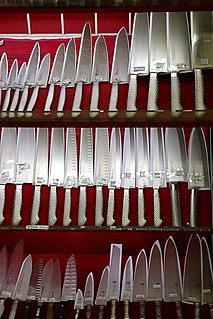 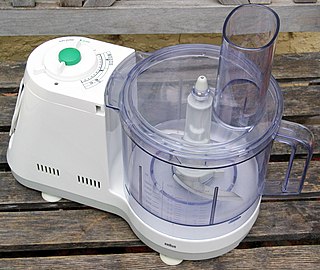 A food processor is a kitchen appliance used to facilitate repetitive tasks in the preparation of food. Today, the term almost always refers to an electric-motor-driven appliance, although there are some manual devices also referred to as "food processors".

A microtome is a cutting tool used to produce extremely thin slices of material known as sections. Important in science, microtomes are used in microscopy, allowing for the preparation of samples for observation under transmitted light or electron radiation.

A backsaw is any hand saw which has a stiffening rib on the edge opposite the cutting edge, enabling better control and more precise cutting than with other types of saws. Backsaws are normally used in woodworking for precise work, such as cutting dovetails, mitres, or tenons in cabinetry and joinery. Because of the stiffening rib, backsaws are limited in the depth to which they can cut. Backsaws usually have relatively closely spaced teeth, often with little or no set.

The Santoku bōchō or Bunka bōchō (文化包丁) is a general-purpose kitchen knife originating in Japan. Its blade is typically between 13 and 20 cm long, and has a flat edge and a sheepsfoot blade that curves down an angle approaching 60 degrees at the point. The term Santoku may refer to the wide variety of ingredients that the knife can handle: meat, fish and vegetables, or to the tasks it can perform: slicing, chopping and dicing, either interpretation indicating a multi-use, general-purpose kitchen knife. The Santoku's blade and handle are designed to work in harmony by matching the blade's width and weight to the weight of the tang and the handle.

A jointer or in some configurations, a jointer-planer is a woodworking machine used to produce a flat surface along a board's length. As a jointer, the machine operates on the narrow edge of boards, preparing them for use as butt joint or gluing into panels. A planer-jointer setup has the width that enables smoothing ('surface planing') and leveling the faces (widths) of boards small enough to fit the tables.

A butcher knife or butcher's knife is a knife designed and used primarily for the butchering or dressing of animal carcases. 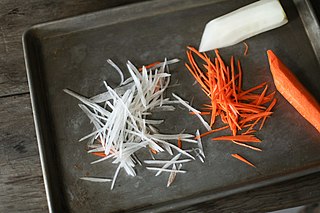 Julienne, allumette, or french cut, is a culinary knife cut in which the food item is cut into long thin strips, similar to matchsticks. Common items to be julienned are carrots for carrots julienne, celery for céléris remoulade, or potatoes for Julienne Fries.

A paper cutter, also known as a paper guillotine or simply guillotine, is a tool often found in offices and classrooms, designed to cut a large amount of paper sheets to be able to issue your document with a straight line in one quick swift slice. 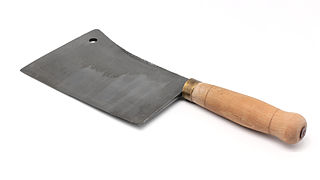 A cleaver is a large knife that varies in its shape but usually resembles a rectangular-bladed hatchet. It is largely used as a kitchen or butcher knife and is mostly intended for splitting up large pieces of soft bones and through thick pieces of meat. The knife's broad side can also be used for crushing in food preparation and can also be used to scoop up chopped items.

Ceramic tile cutters are used to cut tiles to a required size or shape. They come in a number of different forms, from basic manual devices to complex attachments for power tools.

A meat slicer, also called a slicing machine, deli slicer or simply a slicer, is a tool used in butcher shops and delicatessens to slice meats, sausages, cheeses and other deli products. As compared to a simple knife, using a meat slicer requires less effort, as well as keeps the texture of food more intact. Generally, slicers can be adjusted easily to cut slices of variable thickness. Older models of meat slicer may be operated by crank, while newer ones generally use an electric motor. While the slicer is traditionally a commercial apparatus, domestic use versions are also marketed.

Bedrock is a design of bench planes developed by Stanley Works as an improvement over the Bailey plane design. It was introduced in the early 20th century.

Crinkle-cutting is slicing that leaves a corrugated surface. 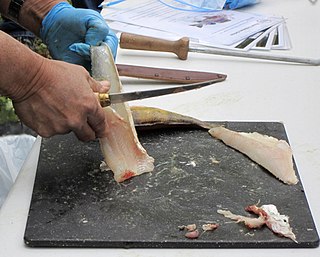 A fillet knife is a kitchen knife used for filleting. It gives good control and aids in filleting. It is a very flexible member of the boning knife family that is used to filet and prepare fish. Fillet knife blades are typically 15 to 28 cm long. This allows them to move easily along the backbone and under the skin of meat.