On 23 November 2009, according to the Afghan Ministry of Interior, four people, including two women were killed when gunmen opened fire on their vehicle returning home to Khost city. [2]

Parachinar or Pāṛačinār is a small town which is the capital of Kurram District in the province of Khyber Pakhtunkhwa, Pakistan. Parachinar is situated on a neck of Pakistani territory west of Peshawar, that juts into the Logar and Nangarhar provinces of Afghanistan. With a distance of 110 kilometres (68 mi) from the Afghan capital Kabul, Parachinar is the closest point in Pakistan to Kabul. It is one of two urban areas in Kurram District, the other one being Sadda, and has shrank considerably in population over the past few decades, becoming the least populous urbanized area in Kohat Division.. 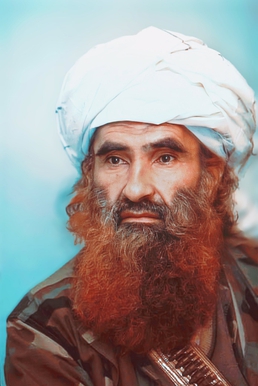 Mawlawi Jalaluddin Haqqani was an Afghan leader of the Haqqani network, an insurgent group fighting in guerilla warfare against US-led NATO forces, and the present government of Afghanistan they support. He distinguished himself as an internationally sponsored insurgent fighter in the 1980s during the Soviet–Afghan War, including Operation Magistral. He earned U.S. praise and was called "goodness personified" by the U.S. officials. US officials have admitted that during the Soviet-Afghan war he was a prized asset of the Central Intelligence Agency (CIA). U.S. former president Ronald Reagan called Jalaluddin Haqqani a "freedom fighter" during the Soviet-Afghan war. By 2004, he was directing pro-Taliban militants to launch a holy war in Afghanistan. In 2016, Lieutenant General John W. Nicholson Jr. claimed that the U.S. and NATO were not targeting Haqqani's network in Afghanistan.

Hakim Taniwal was the Governor of Paktia province in Afghanistan until he was killed by a suicide bomber on 10 September 2006, at the age of 60. Prior to his governorship of Paktia, Taniwal had governed the difficult province of Khost, near the border with Pakistan, where al-Qaeda had established training camps during the time of the Taliban and later took refuge in the Tora Bora mountains.

Tirazayi or Tere Zayi is one of the districts of Khost Province, Afghanistan. It is situated in the northeast of the province. It borders Khost and Sabari districts to the west, Bak District to the north and Pakistan to the east. The population is 49,617. The district center is Aliser, located in the western part of the district.

Khost Airport is located next to the city of Khost in eastern Afghanistan. It has been used historically for military purposes only but in recent years it was developed and expanded to be used also for commercial flights. 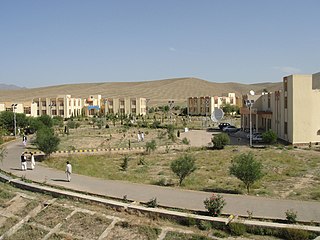 The Great Mosque of Khost or simply the Khost Mosque is the largest mosque in the city of Khost, in eastern Afghanistan. It can hold up to 2,000 worshipers during any prayer.

De Abasin Sape or the Abasin Waves is a football team in Afghanistan. They play in the Afghan Premier League. Based in the city of Khost, the club represents the provinces of Khost, Paktia, Paktika, and Logar in the southeastern region of Afghanistan.