Mangaia (traditionally known as A'ua'u Enua, which means terraced) is the most southerly of the Cook Islands and the second largest, after Rarotonga. It is a roughly circular island, with an area of 51.8 square kilometres (20.0 sq mi), 203 kilometres (126 mi) from Rarotonga. Originally heavily populated, Mangaia's population has dropped by 75% in the last 50 years.

Excavation of the Tangatatau Rockshelter shows that Mangaia was first settled around 1000 CE. [1] According to oral tradition, the island was not discovered, but emerged from the underworld of Avaiki already populated. [2] It was later further settled from Rarotonga, Aitutaki, Atiu, Tonga and Tahiti. [2] Adze heads and basalt tools show that trading contact was maintained with Rarotonga, Samoa, and Raiatea in the Society Islands. [3] Initially settlement was focused on the coastal villages, but by the 16th century it had shifted inland and inter-island trade had virtually disappeared. [4] Oral histories of this era are of chiefs competing for land and status. [3]

The island was first discovered by Europeans on 29 March 1777 with the arrival of Captain James Cook. [5] It was visited by two more ships, one of which was possibly HMS Bounty , before the arrival of John Williams of the London Missionary Society in 1823. [2] Williams was unable to land, but in 1824 he returned and left behind two preachers from Taha'a, who began to convert the islands to Christianity. [2]

Before the arrival of the missionaries, Mangaian society was characterised by a violent struggle between war-leaders competing for the title of mangaia (supreme temporal power), with Ariki serving as priests rather than hereditary chiefs. [6] The last mangaia, Pangemiro, died shortly after the missionaries' arrival, and the abolition of war under Christianity effectively froze the power structure and the division of land and titles in the state they had been in 1823. [7] The Numangatini Ariki became dominant, with the title alternating between two branches of the family. [7]

In 1888 Mangaia became a British protectorate as part of the Cook Islands Federation. In 1901 it was annexed by New Zealand. Post-annexation the island exported citrus, bananas and coffee to New Zealand, but exports ceased during the First World War. [8] In 1946 pineapple growing was introduced and in the 1960s and 1970s Mangaia had a thriving export industry. The collapse of this industry in the 1980s and a subsequent economic crisis in 1996 has led to the island's gradual depopulation. [9]

Mangaia was severely damaged by Cyclone Trina in December 2001. The slow-moving cyclone delivered eight days of heavy rain, resulting in the worst flooding in 50 years. [10] Parts of the island were inundated with up to 2 m (6.6 ft) of water, and 95% of the taro crop and 60% of the livestock were destroyed. [11] The resulting food shortage saw the IFRC distribute food to all of the island's residents. [12]

Due to the severity of damage caused by Trina, its name was later retired. [13]

Originally known as A'ua'u or A'ua'u Enua ("terraced"), the island was named Mangaia (or Mangaianui-Neneva, "Mangaia monstrously-great") by Tamaeu, who came to the island from Aitutaki in 1775. [2]

Geologists estimate the island is at least 18 million years old. It rises 4750 m (15,600 ft) above the ocean floor and has a land area of 51.8 km2. [2] Surrounded by a fringing coral reef, like many of the southern Cook Islands, it is surrounded by a high ring of cliffs of fossil coral 60 m (200 ft) high, known as the makatea. The inner rim of the makatea forms a steep cliff, surrounding swamps and a central volcanic plateau. The interior of the island is drained by underground channels passing through the makatea, [14] leading to extensive networks of caves which have been used historically as refuges and for burials. [15]

The highest point is Rangi-motia, 169 m above sea level, near the centre of the island. Lake Tiriara is a body of fresh water in the south.

The capital is the village of Oneroa, on the west coast, containing about half the population. There are two more villages, Tamarua in the south and Ivirua in the northeast.

Unlike other islands of the Southern Cook Islands, Mangaia has retained its traditional collective land tenure system. [9] Land use is decided by each district's kavana, independently of the Land Court. [9] It has also retained its own dialect of Cook Islands Māori, reo Mangaia. [21]

Mangaia's economy is heavily government-supported, with 50% of the workforce employed by the public-sector. [22] Historically, its economy was based around agricultural production, which benefited from privileged access to the New Zealand market. The removal of this access combined with shipping interruptions destroyed the industry. [22] [23] Subsequent depopulation has left the island lacking in basic services, with no doctor or dentist. [24] Current exports include eis necklaces made from the shells of the pupu snail. [24]

Mangaia is connected to the rest of the Cook Islands by Mangaia Airport.

Previously powered by diesel generators, since 2018 it has been powered by a solar-battery power station. [25]

The flora of Mangaia can be divided into five ecological zones. [26] The pa tai, or coast, is dominated by coconuts, Pandanus tectorius , Barringtonia asiatica , and other scrub plants. The Rautuitui, or upland makatea, is native forest, dominated by indigenous species such as Elaeocarpus tonganus , Hernandia moerenhoutiana , and Guettarda speciosa , with coconuts, candlenuts, and Morinda citrifolia in areas near villages and tracks. [27] The harsher parts of the makatea are covered in scrub, including pandanus and the endemic Geniostoma sykesii . [28] The Puna (swampy lowlands) contain the island's most fertile soils, and are dominated by introduced and cultivate species such as taro, coconut, and Hibiscus tiliaceus . [29] The Rautuanue (slopes) and maunga (mountain) are heavily modified, and covered in pineapple, coconut, scrub, ferns, and grass. [30]

Birds described from subfossil remains that became extinct as a consequence of human settlement of the island and the introduction of exotic mammals include the Mangaia rail (Gallirallus ripleyi) and the Mangaia crake (Porzana rua). [33]

The island has been designated an Important Bird Area (IBA) by BirdLife International. [34] 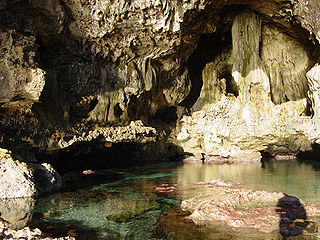 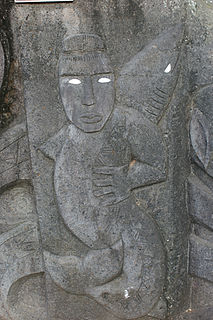 In Cook Islands mythology, Avatea was a lunar deity and the father of gods and men in Mangaian myth of origin. His eyes were thought to be the Sun and the Moon; he was also known as the god of light.

Rarotonga is the largest and most populous of the Cook Islands, with a population of 10,649, out of the country's total resident population of 17,434. Captain John Dibbs, master of the colonial brig Endeavour, is credited as the European discoverer on 25 July 1823, while transporting the missionary Reverend John Williams. 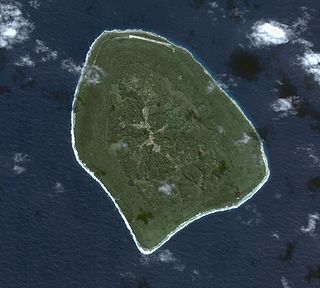 Atiu, also known as Enuamanu, is an island of the Cook Islands archipelago, lying in the central-southern Pacific Ocean. Part of the Nga-pu-Toru, it is 214 km (133 mi) northeast of Rarotonga. The island's population has dropped by two-thirds in the last 50 years. 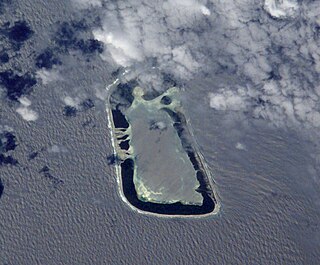 Rakahanga is part of the Cook Islands, situated in the central-southern Pacific Ocean. The unspoilt atoll is 1,248 kilometres from the Cook Islands' capital, Rarotonga, and lies 1,111 kilometres south of the equator. Its nearest neighbour is Manihiki which is just 44 kilometres away. Rakahanga's area is 4 square kilometres (1.5 sq mi). Its highest point is approximately 5 metres above sea level. The population was 83 in the 2016 Census of Population & Dwellings. Since 2014 Rakahanga's power has been 100% solar generated. The Rakahanga-Manihiki language differs from Cook Islands Maori.

Manihiki is an atoll in the northern group of the Cook Islands known informally as the "Island of Pearls". It is approximately 1,299 kilometres (807 mi) north of the capital island of Rarotonga, making it one of the most remote inhabitations in the Pacific Ocean. Its name has two possible meanings: It's believed that the original name of the island was Manuhiki, inspired by the aboriginal discovers Manu coming from the word Rua Manu and Hiki meaning ashore, so the literal translation would be canoe carried ashore. The second interpretation is that the original discoverers were from Manihi, an island in Tuamotus, so the name of the island would mean Little Manihi.

A Tapere or Sub-District is a low level of traditional land subdivision on five of the Lower Cook Islands, comparable to the ahupua'a of the main Hawaiian Islands. Among the populated raised islands, only Mitiaro is not subdivided into tapere. The remaining southern Cook Islands, Manuae, Palmerston and Takutea are atolls and/or uninhabited, and therefore not subject to this type of traditional subdivision. The atolls of the northern Cook Islands are subdivided into motu, instead.

Kei'a is one of the six traditional districts of the island of Mangaia in the Cook Islands. It is located on the west side of the island, to the south of the District of Tava'enga and west of Veitatei. The district was traditionally divided into 6 tapere:

Tropical Cyclone Trina was a weak but destructive tropical cyclone in late 2001 which caused some of the worst flooding in the South Pacific island of Mangaia, Cook Islands, in nearly 50 years. Forming out of an upper-level low pressure system on November 29 near the island of Rarotonga, or roughly 1,470 mi (2,365 km) southeast of Fiji, Trina remained practically stationary as it meandered in the same general area for over a week. Due to unfavorable conditions for tropical cyclogenesis, the storm struggled to develop significant convection, preventing it from intensifying beyond 65 km/h (40 mph). After finally succumbing to wind shear on December 2, the system weakened to a tropical depression near Mangaia and dissipated several days later.

Numangatini Tione Ariki (b?–d?) was a sovereign of the Cook Islands. He was ariki (king) of the Numangatini dynasty, a chiefdom on the island of Mangaia.

The culture of the Cook Islands reflects the traditions of its fifteen islands as a Polynesian island country, spread over 1,800,000 square kilometres (690,000 sq mi) in the South Pacific Ocean. It is in free association with New Zealand. Its traditions are based on the influences of those who settled the islands over several centuries. Polynesian people from Tahiti settled in the Cook Islands in the 6th century. The Portuguese captain, Pedro Fernandes de Queirós, made the first recorded European landing in the islands in the early 17th century, and well over a hundred years later, in the 18th century, the British navigator, Captain James Cook arrived, giving the islands their current name. Missionaries developed a written language, bringing schools and Christianity to the Cook Islands in the early 19th century. Cook Islands Māori, also known as Māori Kūki 'Āirani or Rarotongan, is the country's official language.

Geniostoma sykesii is a species of flowering plant in the family Loganiaceae, endemic to the islands of Mangaia and Mitiaro in the Cook Islands. It grows on makatea terrain. Its dried leaves are used in ‘ei, and used to scent multiple products.