Manisa Province (Turkish : Manisa ili) is a province in western Turkey. Its neighboring provinces are İzmir to the west, Aydın to the south, Denizli to the southeast, Uşak to the east, Kütahya to the northeast, and Balıkesir to the north. The city of Manisa is the seat and capital of the province. The traffic code is 45.

Mount Sipylus National Park (Spil Dağı Milli Parkı) near the city of Manisa embraces a richly forested area, hot springs, the famous "crying rock" of Niobe, and a Hittite carving of the mother-goddess Cybele. The park boasts about 120 varieties of native plants within its boundaries, especially wild tulips. The park provides opportunities for mountaineering and camping.

Sardis, in the present-day municipality of Salihli, was the ancient capital of Lydia, once ruled by King Croesus, who was renowned for his wealth. Due to numerous earthquakes, most of the visible remains date back only to Roman times. There are the remains of the temple of Artemis and a restored gymnasium, exhibiting of the past splendor of this ancient city. The splendid synagogue from the 3rd century is worth visiting, with its elaborate mosaics and artfully carved colored-stone panels.

Akhisar, the ancient city of Thyatira, was one of the Seven Churches of the Book of Revelation and the remains of the ancient city is found in part of the city called Tepe Mezarlığı (hill cemetery). More recently, it has become an important commercial center in the province and is its second largest after Manisa.

The villages of Mount Yunt (Yunt Dağı) and the towns of Gördes, Kula and Demirci are known for their carpets and kilims. The houses in Kula are also local examples of Ottoman architecture.

In addition, there are many thermal springs throughout the area.

The province is highly developed in terms of industrial activities, which are especially concentrated in the largest four centers of Manisa, Turgutlu, Akhisar and Salihli. 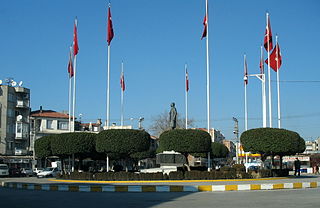 Akhisar is a county district and its town center in Manisa Province in the Aegean region of Western Turkey. Akhisar is also the ancient city of Thyatira.

Mount Spil, the ancient Mount Sipylus, is a mountain rich in legends and history in Manisa Province, Turkey, in what used to be the heartland of the Lydians and what is now Turkey's Aegean Region.

Manisa, historically known as Magnesia, is a large city in Turkey's Aegean Region and the administrative seat of Manisa Province.

Balıkesir Province is a province in northwestern Turkey with coastlines on both the Sea of Marmara and the Aegean. Its adjacent provinces are Çanakkale to the west, İzmir to the southwest, Manisa to the south, Kütahya to the southeast, and Bursa to the east. The provincial capital is Balıkesir. Most of the province lies in the Marmara Region except the southern parts of Bigadiç Edremit, Kepsut, İvrindi, Savaştepe and Sındırgı districts and ones of Ayvalık, Burhaniye, Dursunbey, Gömeç and Havran, that bound the Aegean Region. Kaz Dağı, known also as Mount Ida, is located in this province. Balıkesir province is famous for its olives, thermal spas, and clean beaches, making it an important tourist destination. The province also hosts immense deposits of kaolinite and borax, with some open-pit mines. The Kaz mountains are also threatened with the expansion of gold mining using cyanide which puts the villagers' lives, the agricultural economy, and tourism at risk. 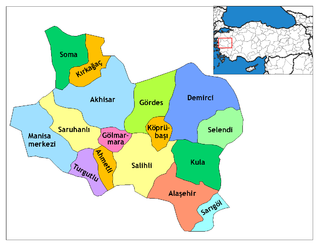 Alaşehir, in Antiquity and the Middle Ages known as Philadelphia, is a town and district of Manisa Province in the Aegean region of Turkey. It is situated in the valley of the Kuzuçay, at the foot of the Bozdağ Mountain. The town is connected to İzmir by a 105 km (65 mi) railway. The longtime mayor is Gökhan Karaçoban.

Salihli is a large town and district of Manisa Province in the Aegean region of Turkey.

Gölmarmara is a town and district of Manisa Province in Turkey's Aegean at a distance of 66 km (41 mi) from the province center of Manisa. The town owes its name to the nearby Lake Marmara, called under various names throughout history. The town of Gölmarmara itself was a mere village in Ottoman times cited under such names as "Marmaracık" or "Mermere". It was made into a township with its own municipality depending the district center of Akhisar at the time of the foundation of the Turkish Republic (1923) and in 1987 a district center by its own right and under the same name, Gölmarmara. 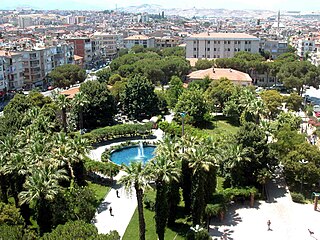 Turgutlu, also known as Kasaba is a city and district in Manisa Province in the Aegean region of Turkey. According to 2009 census, its district population is 140,753; 115,930 live in the city itself. The district covers an area of 473 km2 (183 sq mi) at an elevation of 68 m (223 ft). The district is the most populous after the provincial center of Manisa and the second most populous district center, in Turkey's Aegean Region.

Manisa Celal Bayar University or (MCBU) is a public research university located in Manisa, Turkey. CBU traces its root back to 1959 as an independent sports and teachers' college in Manisa. The main campus is in Muradiye district of Manisa. The university is composed of 14 colleges, 3 schools, and 15 vocational schools. As of 2017 university offers over 70 different undergraduate and over 90 graduate programs. MCBU is the only school in the country to offer tobacco technology engineering program. Physical Education and Sports College is also one of oldest in Turkey that began offering sports science and physical education programs. 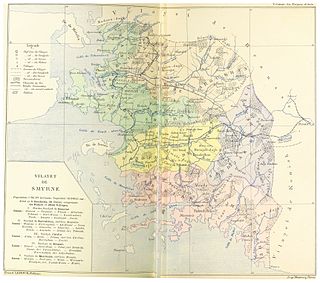 The Vilayet of Aidin or Aydin also known as Vilayet of Smyrna or Izmir after its administrative centre, was a first-level administrative division (vilayet) of the Ottoman Empire in the south-west of Asia Minor, including the ancient regions of Lydia, Ionia, Caria and western Lycia. It was described by the 1911 Encyclopædia Britannica as the "richest and most productive province of Asiatic Turkey".

Yunt Mountains are in western Anatolia, Aegean Region of Turkey. 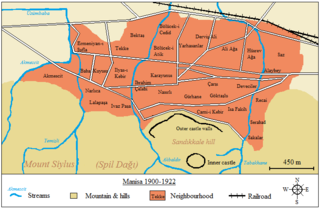 The Fire of Manisa refers to the burning of the town of Manisa, Turkey which started on the night of Tuesday 5 September 1922 and continued until 8 September. It was started and organized by the retreating Greek troops during the Greco-Turkish War (1919-1922), and as a result 90 percent of the buildings in the town were destroyed. The number of victims in the town and adjacent region was estimated to be several thousand by US Consul James Loder Park. Turkish sources claim that 4355 people died in the town of Manisa.

Kula Volcanic Geopark, also known as Kula Geopark, is a geopark, a protected area of geological heritage, located in Kula, Manisa, western Turkey. It was recognized by UNESCO as a UNESCO Global Geopark in 2013, and is the country's only geopark.

Parti Pehlivan after the Surname Law Mehmet Baskak was a Turkish wrestler and a guerilla leader in the Ottoman Empire, and an officer in the Turkish Army during World War I and the Turkish War of Independence. He was an important leader in Kuva-yi Milliye of the Aegean Region. After the declaration of the Turkish Republic he was granted land in Hacıhaliller, Manisa for his services and lived in Manisa until his death.