Pedro Antonio Marín Marín (May 13, 1930 [disputed] [2] – March 26, 2008), known by his "nom de guerre" Manuel Marulanda Vélez, was the main leader of the Communist FARC-EP ("Fuerzas Armadas Revolucionarias de Colombia – Ejército del Pueblo"). Marulanda was born in a coffee-growing region of west-central Colombia in the Quindío Department, to a peasant family politically aligned with the Liberal Party during conflicts in the 1940s and 1950s.

Marulanda was nicknamed "Tirofijo" (Template:Straightshot} by his comrades, apparently because of a reputed ability to accurately aim firearms.[ citation needed ]

Marulanda himself changed his political and ideological inclinations to the Communist Party (PCC) during "La Violencia" (roughly 1948 to 1958) that followed the assassination of the Liberal Party's leader Jorge Eliécer Gaitán.

In March 2006, Alberto Gonzales, the Attorney General of the United States, announced in conjunction with Drug Enforcement Administration and United States Department of Justice officials that the US State Department had placed a $5 million reward on Tirofijo's head, or for information leading to his capture. [3] But "Marulanda" was never apprehended, and died of a heart attack on March 26, 2008. He was replaced as commander-in-chief by Alfonso Cano. [4]

Marulanda and members of his family, like many Liberal peasants, rose up in arms not long after they heard the news about the death of Jorge Eliecer Gaitan.

Eventually, Marulanda split with some of his relatives and became part of a column of guerrilla fighters that came under the influence of the Communist Party of Colombia, which developed a more proactive role in the fighting, executing more raids and offensive operations. He took on the name "Manuel Marulanda" in honor of a murdered union leader. Marulanda eventually met and befriended Luis Morantes, also known as Jacobo Arenas, a PCC political cadre sent to the rural areas by the central party structure.

Members of this group later settled in an area known as Marquetalia towards the end of "La Violencia", keeping their weapons. They distrusted the Colombian Army and government even after a 1953 coup led by General Gustavo Rojas against Conservative president Laureano Gómez. Rojas had offered an amnesty that was accepted by most Liberal irregular fighters nationwide, but reputedly the murder of a few demobilized individuals made Marulanda, his rural comrades and his PCC superiors in the cities uneasy.

After the fall of Rojas in 1957 and the signing of the National Front agreement in 1958 between Colombia's two main parties, self-sufficient armed enclaves, such as the so-called "independent republics" and in particular a supposed "Marquetalia Republic", were considered dangerous by the new government. Pressure from Conservative members of Congress and from the United States led to a Colombian Army attack on Marquetalia, which was eventually overrun during what was termed "Operation Marquetalia" in May 1964.

Formation of the FARC

The Colombian Army's attack was mostly ineffective, though it did scatter the guerrillas, and most of the survivors reunited elsewhere and later became part of the "Bloque Sur" (Southern Bloc) guerrilla group on 27 May 1964, a precursor to the official foundation of the FARC in 1966. Marulanda and Jacobo Arenas soon established themselves as the main leaders of the new guerrilla group.

Marulanda died of a heart attack on March 26, 2008. The news was first brought by Colombian magazine Revista Semana on May 24, 2008, that cited Defense Minister Juan Manuel Santos saying Marulanda died. The minister claimed he had learned this from a reliable informant within FARC. He also told the magazine that three bombing raids had targeted the rebel chief around the date in question. [5] [6] A press statement released by the Colombian Ministry of Defense on May 24 stated that Marulanda died on March 26, 2008, at 18:30 hours (UTC 13:30). [7] On May 25 in a video released to channel teleSUR, Timoleón Jiménez, aka Timochenko, another member of the Central High Command of the FARC, confirmed the death as heart failure. [4] [8]

The history of Colombia includes the settlements and society by indigenous peoples, most notably, the Muisca Confederation, Quimbaya Civilization, and Tairona Chiefdoms; the Spanish arrived in 1499 and initiated a period of annexation and colonization, most noteworthy being Spanish conquest of the Muisca; ultimately creating the Viceroyalty of New Granada, with its capital at Bogotá. Independence from Spain was won in 1819, but by 1830 the "Gran Colombia" Federation was dissolved. What is now Colombia and Panama emerged as the Republic of New Granada. The new nation experimented with federalism as the Granadine Confederation (1858), and then the United States of Colombia (1863), before the Republic of Colombia was finally declared in 1886. Panama seceded in 1903. Since the 1960s, the country has suffered from an asymmetric low-intensity armed conflict, which escalated in the 1990s, but then decreased from 2005 onward. The legacy of Colombia's history has resulted in one of the most ethnically and linguistically diverse countries in the world giving rise to a rich cultural heritage; while varied geography, and the imposing landscape of the country has resulted in the development of very strong regional identities. 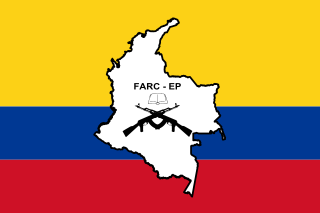 The Revolutionary Armed Forces of Colombia—People's Army is a guerrilla movement involved in the continuing Colombian armed conflict starting in 1964. They are known to employ a variety of military tactics in addition to more unconventional methods, including terrorism. The FARC–EP was formed during the Cold War period as a Marxist–Leninist peasant force promoting a political line of agrarianism and anti-imperialism.

The Colombian Liberal Party is a social democratic and social liberal political party in Colombia. It was founded as a classical liberal party but later developed a more social-democratic tradition, joining the Socialist International in 1999.

Jorge Eliécer Gaitán Ayala was a politician, a leader of a socialist movement in Colombia, a former Education Minister (1940) and Labor Minister (1943–1944), mayor of Bogotá (1936) and one of the most charismatic leaders of the Liberal Party. He was assassinated during his second presidential campaign in 1948, setting off the Bogotazo  and leading to a violent period of political unrest in Colombian history known as La Violencia.

The Patriotic Union or UP is a leftist Colombian political party. It was founded by the FARC and the Colombian Communist Party in 1985, as part of the peace negotiations that the guerrillas held with the Conservative Belisario Betancur administration. The party was subject to political violence from drug lords, paramilitaries and security forces agents during the mid-1980s, leading to its eventual decline, virtual disappearance and extermination. 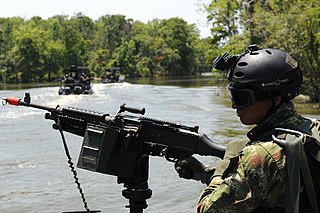 The Colombian conflict began in the mid-1960s and is a low-intensity asymmetric war between the government of Colombia, paramilitary groups, crime syndicates and communist guerrillas such as the Revolutionary Armed Forces of Colombia (FARC), and the National Liberation Army (ELN), fighting each other to increase their influence in Colombian territory. The most important international contributors to the Colombian conflict are multinational corporations and the government of the United States. 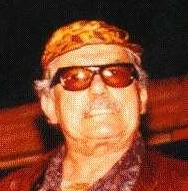 Jacobo Arenas was a Colombian guerrilla leader of the Revolutionary Armed Forces of Colombia.

Guillermo León Sáenz Vargas, more commonly known by his nom de guerre Alfonso Cano, was the commander of the militant group known as Revolutionary Armed Forces of Colombia. He succeeded founder Manuel Marulanda in March 2008 and commanded the Marxist rebel group until being killed in action by the Colombian Army.

"Marquetalia Republic" was an unofficial term used to refer to one of the enclaves in rural Colombia which communist peasant guerrillas held during the aftermath of "La Violencia". Congressmen of the Colombian Conservative Party described these enclaves, including Marquetalia, as "independent republics" which needed to be brought under state control through military force. This area was eventually overrun by the National Army of Colombia in May 1964.

The Revolutionary Armed Forces of Colombia (FARC–EP) is a Marxist–Leninist revolutionary guerrilla organization based in Colombia, which is involved in the ongoing Colombian armed conflict.

The military structure of the Fuerzas Armadas Revolucionarias de Colombia – Ejército del Pueblo, formally began to be developed after the middle of 1964, when the Colombian Army occupied the town of Marquetalia.

The history of communism in Colombia goes back as far as the 1920s and has its roots in the idealism of the Russian October Revolution. Today guerrilla groups, self-proclaimed communists, state that they want to seize state power in Colombia by violent means, and organizations such as the National Liberation Army (ELN) continue their four decades old war with the United States-backed Colombian government. 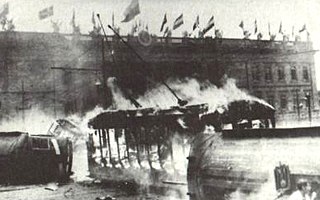 La Violencia was a ten-year civil war in Colombia from 1948 to 1958, between the Colombian Conservative Party and the Colombian Liberal Party, fought mainly in the countryside.

The FARC-Government peace process (1999–2002), from January 7, 1999, to February 20, 2002, was a failed peace process between the Government of President Andrés Pastrana Arango and the Revolutionary Armed Forces of Colombia (FARC) guerrilla group in an effort to bring to an end the ongoing Colombian armed conflict.

National Front was a period in the history of Colombia in which the two main political parties, the Liberal Party and the Conservative Party, agreed to rotate power, intercalating for a period of four presidential terms. The National Front Presidents were Alberto Lleras Camargo (Liberal), Guillermo León Valencia (Conservative), Carlos Lleras Restrepo (Liberal), and Misael Pastrana Borrero (Conservative).

Jaime Bateman Cayón aka el flaco "Skinny" or Pablo by his fellow guerrilleros was a Colombian guerrilla leader and both founder and commander of the 19th of April guerrilla movement.

This is a timeline of events related to the Colombian armed conflict.

Manuel Cepeda Vargas was a lawyer and Senator of Colombia, gunned down in Bogotá on 9 August 1994 as part of a bloody repression of the Patriotic Union. A Communist party politician, he had been a Member of the Chamber of Representatives of Colombia from 1992 to 1994, and had served a sentence in prison because of his political ideology, charged for revolutionary activity.