Last updated May 14, 2020
This article is about the Jesuit and missionary. For other people with this name, see Manuel de Almeida (disambiguation).

Manuel de Almeida (sometimes Manoel de Almeida, 1580–1646) was a native of Viseu who entered at an early age into the Society of Jesus and went out as a missionary to India. He is noted to have travelled to Ethiopia and Eritrea and Lake Tana and built a number of churches and monasteries, particularly on the small islands of the lake.

In 1622, Almeida was selected by the general of his order as ambassador to the Emperor of Ethiopia, Susenyos. Accompanied by three companions, Almeida left Bassein 28 November of that year for Suakin, and reached Diu two months later; he was delayed at the port of Dhofar from 18 May 1623 to 16 October due to unfavorable winds. At last Almeida departed for Suakin, reaching it 4 December, where he received a pass from the local Pasha to pass through the territories of the Ottoman Empire. He then found passage to Massawa, whence he made his way to Fremona by way of Debarwa (where he met the governor of Tigray, Ras Keba Krestos), reaching the Catholic base in January 1624. [1]

He was well received by Emperor Susenyos, but his successor Fasilides first exiled him and his fellow Jesuits to Fremona in 1633. Almeida was selected, along with Manoel Barradas and two other priests, to return to Goa and seek help from the Portuguese authorities for the missionaries; however, he made slow progress and by the time he reached Diu, most of his fellow Jesuits, who had been subsequently expelled from the country, had caught up with him. [2] Upon returning to India, after thirteen years' absence, Almeida was made provincial of his order, and inquisitor. There he died.

Almeida wrote a history of Ethiopia, Historia de Etiopía a Alta ou Abassia, which drew on his own experiences as well as the writings of previous missionaries like Pedro Páez. The Historia was never published during Almeida's lifetime; but an abridgment and partial revision of Almeida's work by Baltazar Téllez was printed at Coimbra in 1660; an anonymous translation of Tellez's work into English appeared in 1710. Selections from Historia work were translated into English by C.F. Beckingham and G.W.B. Huntingford and published in Some Records of Ethiopia, 1593-1646 (London: Hakluyt Society, 1954).

Jerónimo Lobo was a Portuguese Jesuit missionary. He took part in the unsuccessful efforts to convert Ethiopia from the native Ethiopian church to Roman Catholicism until the expulsion of the Jesuits in 1643. Afterwards he wrote an account of his time in Ethiopia, Itinerário, which is an important source for the history and culture of that country.

The Kebra Nagast, or The Glory of the Kings, is a 14th-century national epic account written in Ge'ez by Is'haq Neburä -Id of Axum. The text, in its existing form, is at least 700 years old and is considered by many Ethiopian Christians to be a historically reliable work. It is considered to hold the genealogy of the Solomonic dynasty, which followed the Ethiopian Orthodox Church.

The Blue Nile Falls is a waterfall on the Blue Nile river in Ethiopia. It is known as Tis Abay in Amharic, meaning "great smoke". It is situated on the upper course of the river, about 30 km downstream from the town of Bahir Dar and Lake Tana. The falls are one of Ethiopia's best known tourist attractions.

Gelawdewos was Emperor of Ethiopia of the Solomonic dynasty from 3 September 1540 until his death. His throne name was Asnaf Sagad I. He was a younger son of Dawit II by Sabla Wengel.

Menas or Minas, throne name Admas Sagad I, was nəgusä nägäst of Ethiopia from 1559 until his death, and a member of the Solomonic dynasty. He was a brother of Gelawdewos.

Susenyos I was Emperor of Ethiopia from 1606 to 1632. His father was Abeto (Prince) Fasilides, son of Abeto (Prince) Yakob, who was a son of Dawit II. As a result, while some authorities list Susenyos as a member of the Solomonic dynasty, others consider him, instead of his son, Fasilides, as the founder of the Gondar line of the dynasty.

Takla Maryam was Emperor (1430–1433) of Ethiopia. A member of the Solomonic dynasty, he was the second son of Dawit I.

Fremona was a town in Tigray, Ethiopia. It was about a mile in circumference and was flanked with towers. The town served as the base of the Roman Catholic missionaries to Ethiopia during the 16th and 17th centuries. Bernhard Lindahl identifies Fremona with the modern settlement of Endiet Nebersh, located 10 kilometers from Adwa.

Amba Geshen is the name of a mountain in northern Ethiopia. It is in Ambassel, South Wollo Zone of the Amhara Region, northwest of Dessie, at a latitude and a longitude of 11°31′N39°21′E. Part of Ambassel woreda, Amba Geshen is one of the mountains of Ethiopia where most of the male heirs to the Emperor of Ethiopia were interned, usually for life. It was the second of the three such mountains, or amba, said to have been used for this purpose, the other two being Debre Damo and Wehni. 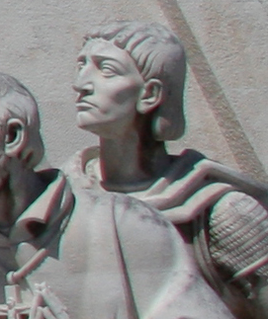 Cristóvão da Gama, anglicised as Christopher da Gama, was a Portuguese military commander who led a Portuguese army of 400 musketeers on a crusade in Ethiopia (1541–1543) against the far larger Adal Muslim army of Imam Ahmad ibn Ibrahim al-Ghazi aided by the Ottoman Empire.

AbbaBahrey was a late 16th-century Ethiopian monk, historian, and ethnographer, from the southern region of Gamo. He is best known for his 1593 work on the history of the Oromo and their migrations in the 16th century, the "History of the Galla". This short work is considered the ultimate source for information on the sixteenth century history of the Oromo: Manuel de Almeida borrowed heavily from Bahrey in writing his history of Ethiopia, and Hiob Ludolf derived much of his information on the Oromo from Baltazar Téllez's abridgment of Almeida's work.

The Gibe River is by far the largest tributary of the Omo River in Ethiopia and typically flowing south / southeast. The confluence of the large Gibe River at 8°19′N37°28′E with the smaller Wabe River forms the even larger Omo River. Consequently, the whole drainage basin is sometimes called Omo-Gibe River Basin with the Gibe and the Omo draining the upper and lower reaches, respectively.

Abba Pentelewon was a Christian monk who is traditionally credited with founding Pentalewon Monastery located on the top of Mai Qoho Hill northwest of Axum in Tigray, Ethiopia. He is one of the members of the group known as the Nine Saints.

Father Afonso Mendes, was a Portuguese Jesuit theologian, and Patriarch of Ethiopia from 1622 to 1634. While E.A. Wallis Budge has expressed the commonly accepted opinion of this man, as being "rigid, uncompromising, narrow-minded, and intolerant", there are some who disagree with it. The writings of Mendes include Expeditionis Aethiopicae, which describes the customs and conditions of Ethiopia. 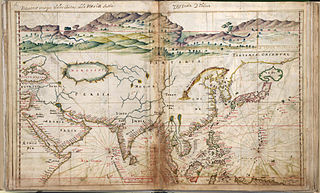 The Portuguese presence in Asia was responsible for what would be many of first contacts between European countries and the East, starting on May 20, 1498 with the trip led by Vasco da Gama to Calicut, India. Portugal's goal in the Indian Ocean was to ensure their monopoly in the spice trade, establishing several fortresses and commercial trading posts.

Ethiopian historiography includes the ancient, medieval, early modern, and modern disciplines of recording the history of Ethiopia, including both native and foreign sources. The roots of Ethiopian historical writing can be traced back to the ancient Kingdom of Aksum. These early texts were written in either the Ethiopian Ge'ez script or the Greek alphabet, and included a variety of mediums such as manuscripts and epigraphic inscriptions on monumental stelae and obelisks documenting contemporary events. The writing of history became an established genre in Ethiopian literature during the early Solomonic dynasty (1270–1974). In this period, written histories were usually in the form of royal biographies and dynastic chronicles, supplemented by hagiographic literature and universal histories in the form of annals. Christian mythology became a linchpin of medieval Ethiopian historiography due to works such as the Orthodox Kebra Nagast. This reinforced the genealogical traditions of Ethiopia's Solomonic dynasty rulers, which asserted that they were descendants of Solomon, the legendary King of Israel.