Unlike typical African lamellophones, such as the mbira, used to produce complex polyphony and polyrhythms, the marimbula usually plays the role of a bass guitar, i.e. providing the rhythmic and harmonic support for a band, although it can produce a simple melody as well.

Designs of marimbulas vary greatly, in terms of the material of resonator, the number and arrangement of keys, the overall arrangement and size of the instrument and the way it is played.

It consists of a wood box with a sound hole cut in the center of it. Across this hole, a number of metal strips are attached at one end to the resonating box. These metal strips are tuned to different pitches, and are plucked to produce a bassline for the music. The marímbula is usually classified as part of the lamellophone family of musical instruments.

With its roots in African instruments, the marimbula originated in the province of Oriente, Cuba, in the 19th century. Eventually it spread throughout the Caribbean, the Americas, and Africa, from Liberia to the Congo. By the 1930s it had made its way to Haiti, the Dominican Republic, Puerto Rico, Jamaica, other Caribbean islands, Mexico, and as far away as New York City. The Cubans call it marímbula, and most of the other Caribbean countries have adopted this name or some variant of it: marimba, malimba, manimba, marimbol. The instrument has a number of other names, such as marímbola (Puerto Rico), bass box, calimba (calymba), rhumba box, Church & Clap, Jazz Jim or Lazy Bass (Jamaica), and box lamellophone.

Sound of a marímbula being played  (help·info)

African slaves of the Caribbean made musical instruments from whatever stray material they could lay their hands on. Early marimbulas were made from discarded wooden packing crates, with tongues (keys) made of springy wood, bamboo, old hack-saw blades, all kinds of discarded springs, etc. The musician sits on top of the box reaching down to pluck the tongues whilst slapping the sides of the box like a drum. The instrument's evolution and playing style is similar to the cajon box drum.

This instrument was very important in the development of Afro-Cuban music as it was one of the basic instruments played by changüí musicians. Both changüí and son genres developed as a result of the combination of African and Spanish musical styles and instrumentation. Thus, changüí musicians still play a pair of tack-head bongos, marímbula, a pair of maracas, güiro, and tres to accompany the voice of the vocalist and chorus. Most of the above-mentioned instruments are handmade folk instruments, made from locally available materials, as opposed to commercially produced instruments. The oldest surviving recordings of the marímbula in Cuba were made by Terceto Yoyo and Sexteto Habanero in 1925. [1]

This was one of the many instruments imported from the Americas to Africa, which continue to be played to this day, in various forms and styles, particularly in the countries of Sierra Leone, Liberia, Guinea, Ghana and Nigeria.

The marímbula became quite popular in Jamaica in conjunction with guitars, drums, maracas, and vocals in the churches, where it was known as church and clap, in nightclubs where it was known as jazz jim, and among the various hotel performers, who played mento music. It can still be found in use by mento musicians such as The Jolly Boys.[ citation needed ]

Currently, the instrument is regaining popularity among hip hop artists and mbira players, like Chartwell Dutiro and The Jolly Boys.[ citation needed ]

Mbira are a family of musical instruments, traditional to the Shona people of Zimbabwe. They consist of a wooden board with attached staggered metal tines, played by holding the instrument in the hands and plucking the tines with the thumbs, the right forefinger, and sometimes the left forefinger. Musicologists classify it as a lamellaphone, part of the plucked idiophone family of musical instruments. In Eastern and Southern Africa, there are many kinds of mbira, often accompanied by the hosho, a percussion instrument. It is often an important instrument played at religious ceremonies, weddings, and other social gatherings. The "Art of crafting and playing Mbira/Sansi, the finger-plucking traditional musical instrument in Malawi and Zimbabwe" was added to the UNESCO Representative List of the Intangible Cultural Heritage of Humanity in 2020.

Zimbabwean music is heavily reliant on the use of instruments such as the mbira, Ngoma drums and hosho. Their music symbolizes much more than a simple rhythm, as the folk and pop style styled music was used as a symbol of hope for Zimbabweans looking to gain independence from Rhodesia. Music has played a significant role in the history of Zimbabwe, from a vital role in the traditional Bira ceremony used to call on ancestral spirits, to protest songs during the struggle for independence. The community in Zimbabwe used music as a tool to voice their oppression when they didn't have the weapons to fight back. In the eighties, the Music of Zimbabwe was at the center of the African Music scene thanks to genres such as Sungura and Jit. However, several performers were banned by state TV and radio leading to the closing of several music venues.

Changüí is a style of Cuban music which originated in the early 19th century in the eastern region of Guantánamo Province, specifically Baracoa. It arose in the sugar cane refineries and in the rural communities populated by slaves. Changüí combines the structure and elements of Spain's canción and the Spanish guitar with African rhythms and percussion instruments of Bantu origin. Changüí is considered a predecessor of son montuno, which has enjoyed tremendous popularity in Cuba throughout the 20th century.

Mento is a style of Jamaican folk music that predates and has greatly influenced ska and reggae music. It is a fusion of African rhythmic elements and European elements, which reached peak popularity in the 1940s and 1950s. Mento typically features acoustic instruments, such as acoustic guitar, banjo, hand drums, and the rhumba box — a large mbira in the shape of a box that can be sat on while played. The rhumba box carries the bass part of the music.

The hosho are Zimbabwean musical instruments consisting of a pair of maranka (mapudzi) gourds with seeds. They are used as major instruments in many traditional Shona music genres, such as in mbira ensembles and in mhande. They typically contain hota seeds inside them. Before the hota seeds are added, the hosho is boiled in salted water and the inside is scraped out with a corncob, newspaper plug, or woven wire. Removing the debris inside the hosho allows for a more sharp and percussive tone. 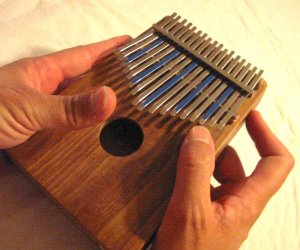 A lamellophone is a member of the family of musical instruments makes its sound by a thin vibrating plate called a lamella or tongue, which is fixed at one end and has the other end free. When the musician depresses the free end of a plate with a finger or fingernail, and then allows the finger to slip off, the released plate vibrates. An instrument may have a single tongue or a series of multiple tongues.

Latin percussion is a family of percussion, membranophone, lamellophone and idiophone instruments used in Latin music.

The agidigbo or ‘’’molo’’’ is a large traditional plucked lamellophone thumb piano used by the Yoruba people of Nigeria to play apala music.

Cuban folk music includes a variety of traditional folk music of Cuba, and has been influenced by the Spanish and the African culture as well as the remaining indigenous population of the Caribbean. 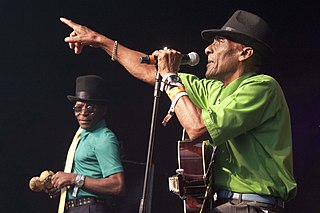 The Jolly Boys are a mento band from Port Antonio, Jamaica. It was formed in 1945 and had great commercial success in the late 1980s and 1990s among reggae and world music fans. They released a new album in 2010 Great Expectation and are currently the house band at GeeJam, a hotel in Port Antonio. 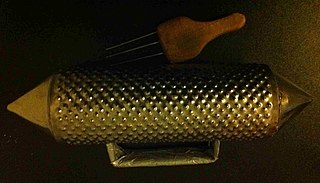 The guayo or ralladera is a metal scraper used as a percussion instrument in traditional styles of Cuban music such as changüí, predecessor of son cubano. Largely replaced by the güiro during the 20th century, the guayo is now rare. In the Dominican Republic, the güira, a similar metal scraper used in merengue, is sometimes called guayo. In contrast to Cuba, güiras replaced güiros in the early 20th century.

A marimba is a xylophone-like percussion instrument played with mallets.