Born on 2 March 1895 in Marseille, he was the eldest son in his family. At 18 he entered the French military academy of Saint-Cyr, in August 1914 he was commissioned as a second lieutenant, less than a year later he was the youngest captain in the French Army at only 20, he started training to become a pilot. During the First World War he was wounded multiple times. [1]

In 1937 he was Chef d'état-major (chief of staff) of the Commandant supérieur of Levantine Troops. From 1940-1941 he served under Jean de Lattre de Tassigny as chief of staff of the commander in chief of North Africa at the headquarters of Vichy French forces in Tunisia. In 1942 Carpentier joined General Charles de Gaulle's Free French forces, becoming chief of staff of the French Expeditionary Corps in 1943. He continued in this post until 1944, when he became Commander of the 2nd Moroccan Division, with which he served until 1945. [1] After World War II he was in charge of France's 15 military regions and was appointed Commandant supérieur of Tunisian Troops in 1946. He was made Grand Officer of the French Legion of Honor in 1947. In 1949 he was appointed commander-in-chief of French Union forces in Indochina, but in 1950 following the disastrous defeat in the Battle of Route Coloniale 4 he was replaced by de Lattre. [2] Carpentier then returned to Europe to become chief of staff assigned to NATO in 1951, serving there until 1952. In 1956 he was appointed Inspector General of Infantry, eventually retiring as Commander in Chief of NATO for Central Europe. [1] 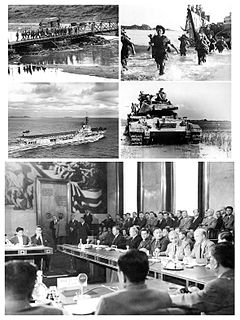 The First Indochina War began in French Indochina on December 19, 1946, and lasted until July 20, 1954. Fighting between French forces and their Việt Minh opponents in the south dated from September 1945. The conflict pitted a range of forces, including the French Union's French Far East Expeditionary Corps, led by the government of France and supported by the former emperor Bảo Đại's Vietnamese National Army against the People's Army of Vietnam and Việt Minh, led by Võ Nguyên Giáp and Hồ Chí Minh. Most of the fighting took place in Tonkin in northern Vietnam, although the conflict engulfed the entire country and also extended into the neighboring French Indochina protectorates of Laos and Cambodia.

Jean Joseph Marie Gabriel de Lattre de Tassigny was a French army general during World War II and the First Indochina War. He was posthumously elevated to the dignity of Marshal of France.

Alphonse Pierre Juin was a senior French Army general who became Marshal of France. A graduate of the École Spéciale Militaire class of 1912, he served in Morocco in 1914 in command of native troops. Upon the outbreak of the First World War, he was sent to the Western Front in France, where he was gravely wounded in 1915. As a result of this wound, he lost the use of his right arm.

Lieutenant General Sylvain Trần Văn Minh was a Vietnamese diplomat and a general of the Army of the Republic of Vietnam. 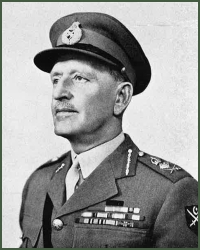 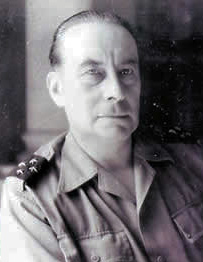 Operation Léa was a French Union military operation between 7 October and 8 November 1947 during the First Indochina War. It is also known as the Việt Bắc Campaign by the Viet Minh. It was an attempt by the French General Valluy to crush the Việt Minh. An airborne force would capture the Việt Minh leadership and three French columns would strike into the Việt Minh heartland.

The Battle of Vĩnh Yên which occurred from 13 to 17 January 1951, was a major engagement in the First Indochina War between the French Union and the Việt Minh. The French Union forces, led by World War II hero Jean de Lattre de Tassigny, inflicted a decisive defeat on the Việt Minh forces, which were commanded by Võ Nguyên Giáp. The victory marked a turn in the tide of the war, which was previously characterized by a number of Việt Minh victories.

The Battle of Hòa Bình was fought during the First Indochina War. It occurred from 10 November 1951 to 25 February 1952, when French Union forces attempted to lure the Việt Minh out into the open and to force it to fight on French terms.

Bernard Saint-Hillier was a French general.

The French Far East Expeditionary Corps was a colonial expeditionary force of the French Union Army that was initially formed in French Indochina during 1945 during the Pacific War. The CEFEO later fought and lost in the First Indochina War against the Viet Minh rebels.

The Battle of Nà Sản was fought between French Union forces and the Nationalist forces of the Việt Minh at Nà Sản, Sơn La Province, during the First Indochina War for control of the T’ai region.

Bernard de Lattre de Tassigny was a French Army officer, who fought during World War II and the First Indochina War. Bernard de Lattre received several medals during his military career, including the Médaille militaire. He was killed in action at the age of 23, fighting near Ninh Binh. At the time of his death, his father, General Jean de Lattre de Tassigny, was the overall commander of French forces in Indochina. Bernard's death received widespread newspaper coverage, with headlines drawing attention to the death of the son of a general. His mother worked to preserve the memory of her son, as well as that of her more famous husband who died in 1952. Their legacy includes an open-air memorial chapel and centre in Wildenstein, Alsace, France. The death of Bernard de Lattre is mentioned in histories of the First Indochina War, and it has been compared to the deaths of other sons of generals and military leaders.

Roger Charles André Henri Blaizot was a French military leader, who commanded French forces during World War II and the First Indochina War. Blaizot served in Indochina through the last two years of the World War II, having been sent to command the Far East French Expeditionary Forces by Charles de Gaulle. Following the war, Blaizot led a fifty-member staff group to Indochina as part of a cooperation between British Special Operations Executive agents of Force 136 and the French government to ensure French retention of South East Asia, this having been approved by Lord Philip Mountbatten in 1943. Blaizot then went on to command the French forces in Indochina from 1948 until 1949, succeeding Jean-Étienne Valluy and being succeeded himself by Marcel Carpentier. 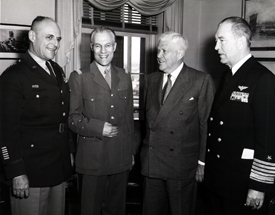 Paul Henri Romuald Ély was a French General and former Chief of the Defence Staff.

1940—1946 in French Indochina focuses on events that happened in French Indochina during and after World War II and which influenced the eventual decision for military intervention by the United States in the Vietnam War. French Indochina in the 1940s was divided into five protectorates: Cambodia, Laos, Tonkin, Annam, and Cochinchina. The latter three made up Vietnam. In 1940, the French controlled 23 million Vietnamese with 12,000 French soldiers, about 40,000 Vietnamese soldiers, and the Sûreté, a powerful police force. At that time, the U.S. had little interest in Vietnam or French Indochina as a whole. Fewer than 100 Americans, mostly missionaries, lived in Vietnam and U.S. government representation consisted of one consul resident in Saigon.

The Battle of Nghĩa Lộ was a battle of the First Indochina War. In the fall of 1952 the French army encountered its most serious crisis since the disasters near the Chinese border at Cao Bằng, Đông Khê and RC 4 occurred in 1949 and 1950. The Battle of Nghĩa Lộ was the opening salvo in a series of offenses and counter-offenses in late 1952 during the First Indochina War. It was part of a Việt Minh offensive in the T’ai region of Tonkin in the vicinity of the Black River. The French countered with Operation Lorraine to attack Việt Minh rear supply bases in an attempt to cut off the offensive. The Việt Minh did not cease or divert the offensive to protect its supply bases. The Việt Minh continued its offensive attack against Nà Sản where there was an outpost and a short airstrip, both guarded by the French army. This series of battles lasted for three months between October 1952 and December 1952. These actions and the Việt Minh successes set the stage for the subsequent Invasion of Laos in April 1953.