Mardin Province is considered part of Turkish Kurdistan [6] and is predominantly populated by Kurds and Arabs who both adhere to the Shafiʽi school of Islam. [7] There is also a small Assyrian Christian population left. [8] A recent study from 2013 has shown that 40% of Mardin Province's population identify as Arabs, and this proportion increases to 49% in the city of Mardin and 48% in Midyat, where Arabs form the majority. [5]

Social relations between Arabs and Kurds have historically been difficult with hostility, prejudice and stereotypes but have in recent years improved. [9] Arabs with Assyrians did not take part in the Kurdish–Turkish conflict and the position of the two groups have been described as being 'submissive' to the Turkish state, creating distrust between them and the Kurds. Kurds perceived Arabs as spies for the state and local Arabs in Mardin city tended to exclude and dominate local politics in the city. [10] Arabs started losing their grip on Mardin city in the 2010s and the Kurdish BDP won the city in the local elections in 2014. Mardin city had previously been governed by pro-state parties supported by local Arabs. [11]

Despite the difficult relations, Arab families have since the 1980s joined the Kurdish cause, [9] and Arab and Assyrian politicians from Mardin are found in Peoples' Democratic Party including Mithat Sancar and Februniye Akyol.

The first known civilization were the Subarian-Hurrians who were then succeeded in 3000 BCE by the Hurrians. The Elamites gained control around 2230 BCE and were followed by the Babylonians, Hittites, Assyrians, Romans and Byzantines. [27]

The local Assyrians/Syriacs, while reduced due to the Assyrian genocide and conflicts between the Kurds and Turks, hold on to two of the oldest monasteries in the world, Dayro d-Mor Hananyo (Turkish Deyrülzafaran, English Saffron Monastery) and Deyrulumur Monastery. The Christian community is concentrated on the Tur Abdin plateau and in the town of Midyat, with a smaller community (approximately 200) in the provincial capital. After the foundation of Turkey, the province has been a target of a Turkification policy, removing most traces of a non-turkish heritage. [28]

In 1927 the office of the Inspector general was created, which governed with martial law. [29] The province was included in the First Inspectorate-General (Turkish : Birinci Umumi Müfettişlik) over which the Inspector General ruled. The Inspectorate-General span over the provinces of Hakkâri, Siirt, Van, Mardin, Bitlis, Sanlıurfa, Elaziğ and Diyarbakır. [30] The Inspectorate General were dissolved in 1952 during the Government of the Democrat Party. [31] The Mardin province was also included in a wider military zone in 1928, in which the entrance to the zone was forbidden for foreigners until 1965. [32]

Mardin province is divided into 10 districts (capital district in bold):

Tur Abdin is a hilly region situated in southeast Turkey, including the eastern half of the Mardin Province, and Şırnak Province west of the Tigris, on the border with Syria and famed since Late Antiquity for its Christian monasteries on the border of the Roman Empire and the Sasanian Empire. The area is a low plateau in the Anti-Taurus Mountains stretching from Mardin in the west to the Tigris in the east and delimited by the Mesopotamian plains to the south. The Tur Abdin is populated by more than 80 villages and nearly 70 monastery buildings and was mostly Syriac Orthodox until the early 20th century. The earliest surviving Christian buildings date from the 6th century.

The Seyfo or Sayfo, also known as the Assyrian genocide, was the mass slaughter and deportation of Syriac Christians in eastern regions of the Ottoman Empire, and neighbouring regions of Persia, committed by Ottoman troops and some Kurdish tribes during the World War I. Considered a genocide by several scholars, it occurred concurrently with the Armenian and Greek genocides. 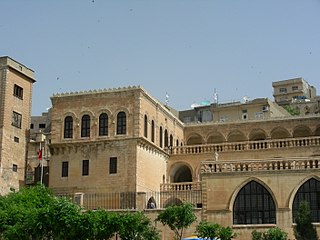 Mardin is a city in southeastern Turkey. The capital of Mardin Province, it is known for the Artuqid architecture of its old city, and for its strategic location on a rocky hill near the Tigris River that rises steeply over the flat plains. The old town of the city is under the protection of UNESCO, which forbids new constructions to preserve its façade. Its population is split evenly between Arabs and Kurds. 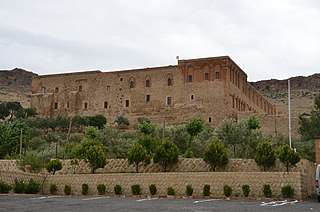 Dayro d-Mor Hananyo is an important Syriac Orthodox monastery. The monastery is located in the Syriac cultural region known as Tur Abdin, and is located three kilometers south east of Mardin, Turkey.

Dayro d-Mor Gabriel, also known as Deyrulumur, is the oldest surviving Syriac Orthodox monastery in the world. It is located on the Tur Abdin plateau near Midyat in the Mardin Province in southeastern Turkey. It has been involved in a dispute with the Turkish government that threatened its existence.

Midyat is a town in Mardin Province of Turkey. The ancient city is the center of a centuries-old Hurrian town in Upper Mesopotamia. In its long history, the city of Midyat has been ruled by various different leaders and nations. According to the 1960 population census Midyat was home to 570 Christian households and only 30 Muslim households. Midyat has a significant native Arab population and a recent study from 2013 has shown that 48% of Midyat's population identify as Arabs.

Ömerli is a town and district in Mardin Province in southeastern Turkey. It is located in the historical region of Tur Abdin. 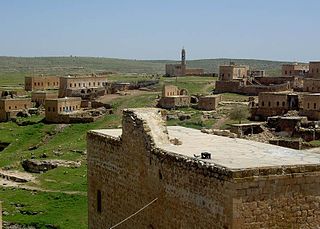 Beth Kustan is a village in Mardin Province in southeastern Turkey. It is located in the district of Midyat and the historical region of Tur Abdin.

İzbırak is a village in Mardin Province in southeastern Turkey. It is located in the district of Midyat and the historical region of Tur Abdin.

Altıntaş is a village in Mardin Province in southeastern Turkey. It is located in the district of Midyat and the historical region of Tur Abdin.

The Mhallami, Mahallami or Mardelli are an Arabic-speaking tribal group, traditionally living in and around the city of Mardin, Turkey. Due migration in since 1920 they are having a large presence in Lebanon as well. As a result of the Lebanese Civil War large numbers fled to Europe, particulary Germany. Outside of the region, they are also known as Mardinli. They typically identify themselves as Arabs, but are sometimes associated with other ethnic groups such as Kurds, Assyrians and Arameans. though their historical roots are not definitively established. They are Sunni-Muslims and primarily speakers of an Arabic dialect that has Turkish, Kurdish and Aramaic influences.

Christianity in Turkey has had a long history dating back to the 1st-century AD. In modern times the percentage of Christians in Turkey has declined from 20 to 25 percent in 1914 to 3–5.5 percent in 1927, to 0.3–0.4% today roughly translating to 200,000–320,000 devotees. Exact numbers are difficult to estimate as many Muslim converts to Christianity often hide their faith for fear of discrimination or familial pressure.

Elbeğendi is a village in Mardin Province in southeastern Turkey. It is located in the district of Midyat and the historical region of Tur Abdin.

Massacres of Diyarbakır were massacres that took place in the Diyarbekir Vilayet of the Ottoman Empire between the years of 1894 and 1896 by ethnic Kurds and Turks. The events were part of the Hamidian massacres and targeted the vilayet's Christian population – Armenians and mostly Assyrians.

Arıca is a village in Batman Province in southeastern Turkey. It is located in the district of Gercüş and the historical region of Tur Abdin.

Çatalçam is a village in Mardin Province in southeastern Turkey. It is located in the district of Dargeçit and the historical region of Tur Abdin.