Margaret of France, Queen of England and Hungary

Margaret of France (French : Marguerite, Hungarian : Margit; 1158 – 18 September 1197) was junior Queen of England by marriage to Henry the Young King until his death in 1183, and Queen of Hungary and Croatia by marriage to Béla III of Hungary from 1186.

She was betrothed to Henry the Young King on 2 November 1160. Henry was the second son of King Henry II of England and Eleanor of Aquitaine. He was five years old at the time of this agreement while Margaret was about two. Margaret's dowry was the vital and much disputed territory of Vexin. [1]

Margaret's husband became co-ruler with his father in 1170. Because Archbishop Thomas Becket was in exile, Margaret was not crowned along with her husband on 14 July 1170. This omission and the coronation being handled by a surrogate greatly angered her father. To please the French King, Henry II had his son and Margaret crowned together in Winchester Cathedral on 27 August 1172. [2] When Margaret became pregnant, she held her confinement in Paris, where she gave birth prematurely to their only son William on 19 June 1177, who died three days later on 22 June. She had no further children.

Margaret was accused in 1182 of having a love affair with William Marshal, 1st Earl of Pembroke, although contemporary chroniclers doubted the truth of these accusations. Henry may have started the process to have their marriage annulled ostensibly due to her adultery, but in reality, because she could not have children. Margaret was sent back to France, according to E. Hallam (The Plantagenets) and Amy Kelly (Eleonore of Aquitaine and the Four Kings), to ensure her safety during the civil war with Young Henry's brother Richard the Lionheart. Her husband died in 1183 while on campaign in the Dordogne region of France. The coronet he and she would have worn was chronicled in about 1218 as "the traditional ring-of-roses coronet of the house of Anjou". Margaret may have taken her coronet to Hungary in 1186 when she married King Bela III. A ring-of-roses coronet was discovered in a convent grave in Budapest in 1838, which may be the same one.

After receiving a substantial pension in exchange for surrendering her dowry of Gisors and the Vexin, Margaret became the second wife of Béla III of Hungary in 1186. [3]

She was widowed for a second time in 1196 and died on pilgrimage to the Holy Land at St John of Acre in 1197, having only arrived eight days prior to her death. [lower-alpha 1] She was buried at the Cathedral of Tyre, according to Ernoul, the chronicler who continued the chronicles of William of Tyre.

Louis VII, called the Younger, or the Young, was King of the Franks from 1137 to 1180. He was the son and successor of King Louis VI and married Duchess Eleanor of Aquitaine, one of the wealthiest and most powerful women in western Europe. The marriage temporarily extended the Capetian lands to the Pyrenees. 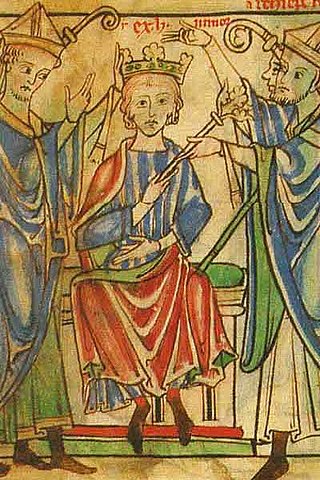 Henry the Young King was the eldest son of Henry II of England and Eleanor of Aquitaine to survive childhood. Beginning in 1170, he was titular King of England, Duke of Normandy, Count of Anjou and Maine. Henry the Young King was the only English king since the Norman Conquest to be crowned during his father's reign, but was frustrated by his father's refusal to grant him meaningful autonomous power. He died, aged 28, six years before his father, leaving his brother Richard to become the next king.

Guy of Lusignan was a French Poitevin knight, son of Hugh VIII of Lusignan and as such born of the House of Lusignan. He was king of Jerusalem from 1186 to 1192 by right of marriage to Sibylla of Jerusalem, and King of Cyprus from 1192 to 1194. Having arrived in the Holy Land at an unknown date, Guy was hastily married to Sibylla in 1180 to prevent a political incident within the kingdom. As the health of his brother-in-law, Baldwin IV of Jerusalem, deteriorated, Guy was appointed by Sibylla as regent for his stepson, Baldwin V of Jerusalem. Baldwin IV died in 1185, followed shortly by Baldwin V in 1186, leading to the succession of Sibylla and Guy to the throne. Guy's reign was marked by increased hostilities with the Ayyubids ruled by Saladin, culminating in the Battle of Hattin in July 1187—during which Guy was captured—and the fall of Jerusalem itself three months later.

Raynald of Châtillon, also known as Reynald or Reginald, was a Crusader knight of French origin but also Prince of Antioch from 1153 to 1160 or 1161, and Lord of Oultrejordain from 1175 until his death. He was born the second son of a French noble family. After losing a part of his patrimony, he joined the Second Crusade in 1147. He settled in the Kingdom of Jerusalem and served in the royal army as a mercenary. 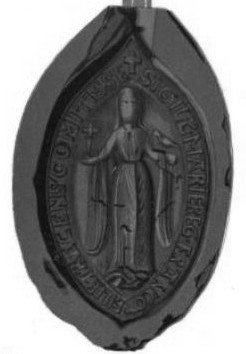 Sibylla was Queen of Jerusalem from 1186 to 1190. She reigned alongside her husband Guy of Lusignan, to whom she was unwaveringly attached despite his unpopularity among the barons of the Kingdom of Jerusalem. 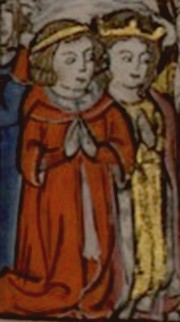 Isabella I was reigning Queen of Jerusalem from 1190 to her death. She was the daughter of Amalric I of Jerusalem and his second wife Maria Comnena, a Byzantine princess. Her half-brother, Baldwin IV of Jerusalem, engaged her to Humphrey IV of Toron. Her mother's second husband, Balian of Ibelin, and his stepfather, Raynald of Châtillon, were influential members of the two baronial parties. The marriage of Isabella and Humphrey was celebrated in Kerak Castle in autumn 1183. Saladin, the Ayyubid sultan of Egypt and Syria, laid siege to the fortress during the wedding, but Baldwin IV forced him to lift the siege. 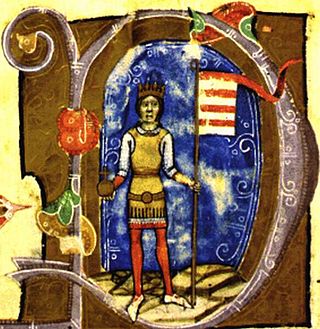 Béla III was King of Hungary and Croatia between 1172 and 1196. He was the second son of King Géza II and Géza's wife, Euphrosyne of Kiev. Around 1161, Géza granted Béla a duchy, which included Croatia, central Dalmatia and possibly Sirmium. In accordance with a peace treaty between his elder brother, Stephen III, who succeeded their father in 1162, and the Byzantine Emperor Manuel I Komnenos, Béla moved to Constantinople in 1163. He was renamed to Alexios, and the emperor granted him the newly created senior court title of despotes. He was betrothed to the Emperor's daughter, Maria. Béla's patrimony caused armed conflicts between the Byzantine Empire and the Kingdom of Hungary between 1164 and 1167, because Stephen III attempted to hinder the Byzantines from taking control of Croatia, Dalmatia and Sirmium. Béla-Alexios, who was designated as Emperor Manuel's heir in 1165, took part in three Byzantine campaigns against Hungary. His betrothal to the emperor's daughter was dissolved after her brother, Alexios, was born in 1169. The emperor deprived Béla of his high title, granting him the inferior rank of kaisar.

Heraclius or Eraclius, was archbishop of Caesarea and Latin Patriarch of Jerusalem.

Stephanie of Milly was the lady of Oultrejordain in 1169–1197 and an influential figure in the Kingdom of Jerusalem. She was also known as Stephanie de Milly, Etienette de Milly, and Etiennette de Milly. She married three times; firstly to Humphrey III of Toron, secondly to Miles of Plancy; her third and last husband was Raynald of Chatillon.

Baldwin of Ibelin, also known as Baldwin II of Ramla, was an important noble of the Kingdom of Jerusalem in the 12th century and was lord of Ramla from 1169-1186. He was the second son of Barisan of Ibelin, and was the younger brother of Hugh of Ibelin and older brother of Balian of Ibelin. He first appears in the historical record as a witness to charters in 1148.

Balian of Ibelin, also known as Barisan the Younger, was a crusader noble of the Kingdom of Jerusalem in the 12th century. He was lord of Ibelin from 1170 to 1193. As the leader of the defense of the city during the siege of Jerusalem in 1187, he surrendered Jerusalem to Saladin on 2 October 1187.

Alys of France, Countess of Vexin was a French princess, the daughter of Louis VII, King of France and his second wife, Constance of Castile.

Ernoul was a squire of Balian of Ibelin who wrote an eyewitness account of the fall of Jerusalem in 1187. This was later incorporated into an Old French history of Crusader Palestine now known as the Chronicle of Ernoul and Bernard the Treasurer, often abbreviated Ernoul-Bernard. The chronicle covers the years from 1100 until 1228. A few manuscripts copied for Bernard, treasurer of Corbie Abbey, extend the narrative down to 1232. 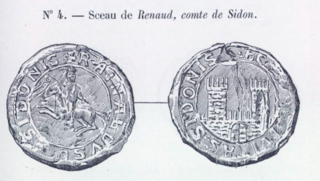 Reginald Grenier was Count of Sidon and an important noble in the late-12th century Kingdom of Jerusalem.

Constance of Castile was Queen of France as the second wife of Louis VII, who married her following the annulment of his marriage to Eleanor of Aquitaine. She was a daughter of Alfonso VII of León and Berengaria of Barcelona, but her year of birth is not known.

Smaragd (Smaragdus) or Zsámbéki was the name of a gens in the Kingdom of Hungary. The ancestor of the clan was a French knight calling himself at that time "Ainordi (Aynard) de Champagne", who settled down in Hungary around 1186 during the reign of Béla III of Hungary and received use of the estate of Zsámbék under a royal grant. His descendants, the gens Smaragd built the Zsámbék Premontre monastery church.

Wikimedia Commons has media related to Margaret of France, Queen of England and Hungary .