Margret Elizabeth Rey (May 16, 1906 – December 21, 1996) was a German-born American writer and illustrator, known best for the Curious George series of children's picture books that she and her husband H. A. Rey created from 1939 to 1966.

Margarete Elisabeth Waldstein was born on May 16, 1906 in Hamburg, Germany, the daughter of Gertrude (Rosenfeld) and Felix Waldstein. [1] [2] [3] Her father was a member of the Reichstag. She studied art at Bauhaus in Dessau, Kunstakademie Düsseldorf, and the University of Munich between 1926 and 1928 and afterward worked in advertising [4] . In 1935 she left Germany for Rio de Janeiro, in Brazil to escape Nazism (Nazi Germany) – and to meet Hans Reyersbach, a salesman and another German Jew from Hamburg, who had been a family friend. [1] They married in 1935 and moved to Paris, France, in 1936. [5]

While in Paris, Hans's animal drawings came to the attention of a French publisher, who commissioned him to write a children's book. The result, Cecily G. and the Nine Monkeys , is little remembered today, but one of its characters, an adorably impish monkey named Curious George, was such a success that the couple considered writing a book just about him. Their work was interrupted with the outbreak of World War II. As Jews, the Reys decided to flee from Paris before the Nazis seized the city. Hans built two bicycles, and they fled Paris just a few hours before it fell. Among the meager possessions they brought with them was the illustrated manuscript of Curious George.

The Reys' odyssey brought them to the France-Spain border to enter into Spain, where they bought train tickets to Lisbon, in Portugal. From there they returned to Brazil, where they had met five years earlier, but this time they continued to New York City, New York, United States Of America. The books were published by Houghton Mifflin in 1941, though certain changes had to be introduced because of the technology of the time. Hans and Margret originally planned to use watercolors to illustrate the books, but since they were responsible for the color separation, he changed these to the cartoon-like images that continue to feature in each of the books. (A collector's edition with the original watercolors was released in 1998.) [6]

Curious George was an instant success, and the Reys were commissioned to write more adventures of the mischievous monkey and his friend, the Man with the Yellow Hat. They wrote seven stories in all, with Hans mainly doing the illustrations and Margret working mostly on the stories, though they both admitted to sharing the work and cooperating fully in every stage of development. At first, however, Margret's name was left off the cover, ostensibly because there was a glut of women already writing children's fiction. In later editions, this was corrected, and Margret now receives full credit for her role in developing the stories.

Margret and her husband moved to Cambridge, Massachusetts in 1963, in a house close to Harvard Square. Following her husband's death in 1977, Margret continued writing, and in 1979 she became a Professor of Creative Writing at Brandeis University in Waltham, Massachusetts. From 1980 she collaborated with Alan Shalleck on a series of short films featuring Curious George and on more than two dozen additional books.

In 1989 Margret Rey established the Curious George Foundation to help creative children and prevent cruelty to animals. In 1996, she made major donations to the Boston Public Library and Beth Israel Deaconess Medical Center. She was also a long-time supporter of the Longy School of Music.

Rey died of a heart attack on December 21, 1996 in Cambridge, Massachusetts, United States of America.

Dr. Lena Y. de Grummond, a professor in the field of library science at The University of Southern Mississippi, contacted the Reys in 1966 about USM's new children's literature collection. H. A. and Margret donated a pair of sketches at the time. When Margret Rey died in 1996, her will designated that the entire literary estate of the Reys would be donated to the de Grummond Collection. 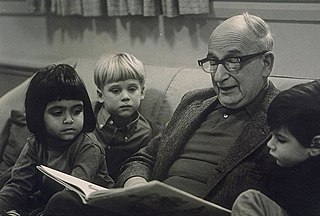 Hans Augusto Rey was a German-born American illustrator and author, known best for the Curious George series of children's picture books that he and his wife Margret Rey created from 1939 to 1966.

Curious George is the main character of a series of popular children's books and TV episodes of the same name, written by Margret and H. A. Rey. George was brought from his home in Africa by "The Man with The Yellow Hat". They are best friends and they live together in "the city" and "the country". The names of these areas have not been declared yet.

Isabelle Christian Holland was an American author of fiction for children and adults. She wrote gothic novels, adult mysteries, romantic thrillers and many books for children and young adults.

Tasha Tudor was an American illustrator and writer of children's books.

Curious George Flies a Kite is a children's book written for beginning readers by Margret Rey, illustrated by H. A. Rey, and published by Houghton Mifflin in 1958. It is the fifth book in the original Curious George series and the only one the Reys did not write together.

The Fay B. Kaigler Children's Book Festival is an annual book festival that was founded in 1968 and is sponsored by The University of Southern Mississippi.

W. Scott Corbett was an American novelist and educator. Beginning 1950 he wrote five adult novels, then began writing books for children. He retired from teaching in 1965 to write full-time. His best known book is The Lemonade Trick, a novel for children. One of his books, entitled The Reluctant Landlord (1950), was made into the 1951 film Love Nest. He wrote his first children's book, Susie Sneakers, in 1956. According to a Providence Journal obituary, he wrote 81 books "including 34 that he aimed at children". According to the de Grummond Children's Literature Collection that holds his papers, he wrote "at least sixty-seven fiction and non-fiction books for children".

Margaret Hillert was an American author, poet and educator. Hillert, a life long resident of the state of Michigan, was widely known for her children's literature, having written over eighty books for beginning readers. She began writing poetry at a young age and published her first verses in 1961.

Margot Benary-Isbert born Margot Isbert, was a German and later an American writer of children's books.

Natalie Savage Carlson was a 20th-century American writer of children's books. For her lifetime contribution as a children's writer, she was United States nominee for the biennial, international Hans Christian Andersen Award in 1966.

Arthur Ainslie Ageton was a naval officer, ambassador, writer, and writing teacher. He was the United States Ambassador to Paraguay from September 9, 1954 to April 10, 1957. He was also a rear admiral in the Navy.

The McCain Library and Archives is the chief reserve library for The University of Southern Mississippi. It houses the items in Southern Mississippi's possession that are not available for checkout. Besides being the archives, the building also houses the office of the President Emeritus, and the universities audio visual department. The Archives also house the de Grummond Children's Literature Collection, one of the largest collections of children's literature in the world. 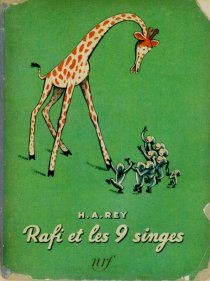 Cecily G. and the Nine Monkeys is a 1939 children's short story written and illustrated by German-American author H. A. Rey. It is the first story to feature Rey's now-famous character, Curious George. When it was first published in France, Cecily's original name was Rafi; Raffy when it was first published in the United Kingdom. But when it appeared in the United States, the character was renamed Cecily.

Barbara Constance Freeman was an English writer and illustrator of books for children and young adults.

Curious George is a children's book written and illustrated by Margret Rey and H. A. Rey, and published by Houghton Mifflin in 1941. It is the first book in the Curious George series and it tells the story of an orphaned monkey named George and his adventures with the Man with the Yellow Hat.

Margot Ladd Tomes was an American artist and illustrator of children's books. Two books that she illustrated were cited by The New York Times as one of the best children's books of the year, Jack and the Wonder Beans in 1977 and If There Were Dreams to Sell in 1984. 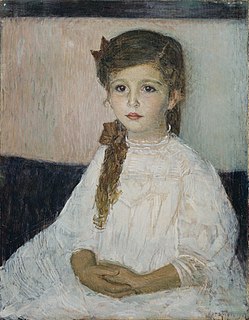 Bettina Ehrlich, née Bauer, was an Austrian painter and illustrator of children's books, many of which she also wrote. She lived briefly in Berlin and Paris, and from 1938 in England.

Anne Terry White was a Ukrainian-born American writer and translator.