Maria Howard Weeden (July 6, 1846 – April 12, 1905), who signed her work and published as Howard Weeden, was an American artist and poet based in Huntsville, Alabama. After the American Civil War, she began to sell works she painted, which included portraits of many African-American freedmen and freedwomen. She exhibited her work in Berlin and Paris in 1895, where it was well received. She published four books of her poetry from 1898 to 1904, illustrated with her own art. She was posthumously inducted into the Alabama Women's Hall of Fame in 1998.

Weeden was born July 6, 1846 in Huntsville, Alabama, six months after the death of her father, Dr. William Weeden, who had also been a prosperous planter. Her mother was his second wife, the former widow Jane (née Urquhart) Watkins. Weeden and her five older siblings were raised by their mother in the Weeden House in Huntsville. [1]

During the Civil War, the Union Army took over their house for use by its officers when it occupied the city in 1862. The family first moved to the slave quarters. [2] When Jane, one of the older Weeden daughters, was attending college in Tuskegee, Alabama, the mother moved the rest of the family there. Maria Weeden also attended the same school, Tuskegee Female College during the war years. [2] [3] (It later became known as Huntingdon College.) She had written poetry and painted since childhood, and at college studied with painter William Frye. [4]

After returning to Huntsville, Weeden began to paint cards, booklets, dinner cards, and small gifts to sell to help her family. Some were watercolors of flowers and landscapes. She also taught art classes. [3] [5] [6]

In 1893 Weeden attended the World's Columbian Exposition in Chicago, where she was dismayed by other artists whose works featuring freedmen and freedwomen showed them in the caricature style of minstrel shows. She returned to Huntsville determined to express the full humanity and dignity of freedmen. Her images included pictures of many freed African Americans who worked as servants for her and friends' families. [3] While she painted, she listened to their accounts of their lives and of folktales, and later adapted some of these as poems, which she wrote in the black dialect. [3] She also painted a portrait of Saint Bartley Harris, a prominent African American pastor in Huntsville, Alabama [7] .

In the 1890s, Joseph Edwin Washington and his wife Mary Bolling Kemp Washington, who owned the Wessyngton Plantation in Robertson County, Tennessee, commissioned Weeden to make portraits of several of their African-American servants, who had stayed to work for them as freedmen after emancipation. These works were about 5" x7" in size, and some were completed in pastels. [8] Weeden's near-sightedness was said to have contributed to her making closely detailed portraits having a "miniature like finish." [5] It is also thought that she may have worked from photographs of subjects. [8]

In 1895, Weeden exhibited several portraits of African-American freedmen and freedwomen in Berlin and Paris, where they were well received. [3] Her paintings were praised by writers Joel Chandler Harris and Thomas Nelson Page, [6] and Harris wrote the foreword to her book Bandanna Ballads (1899). [2]

Weeden also wrote poetry, and she combined both poetry and art in her four books published between 1898 and 1904. [5] Some of her poems were written in the black dialect, now known as African-American English, as she was inspired by stories and folktales told to her by her subjects when they were sitting for portraits. [3]

Between 1866 and 1896, Weeden also had contributed numerous essays and short stories to the Presbyterian Christian Observer, under the pseudonym of "Flake White." These were collected and reprinted in 2005. [9] [10] 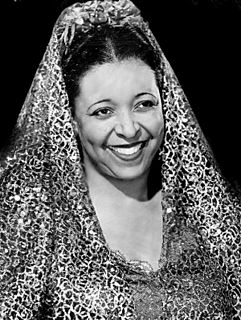 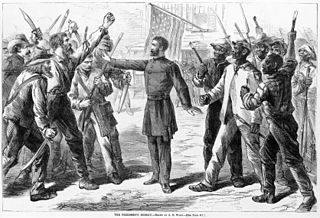 The Bureau of Refugees, Freedmen, and Abandoned Lands, usually referred to as simply the Freedmen's Bureau, was a U.S. government agency from 1865 to 1872, after the Civil War, to direct "provisions, clothing, and fuel ... for the immediate and temporary shelter and supply of destitute and suffering refugees and freedmen and their wives and children."

Howard Chandler Christy was an American artist and illustrator. Famous for the "Christy Girl" – a colorful and illustrious successor to the "Gibson Girl" – Christy is also widely known for his iconic WWI military recruitment and Liberty loan posters, along with his 1940 masterpiece titled, Scene at the Signing of the Constitution of the United States, which is installed along the east stairwell of the United States Capitol.

Luigi Lucioni was an Italian American painter known for his still lifes, landscapes, and portraits. 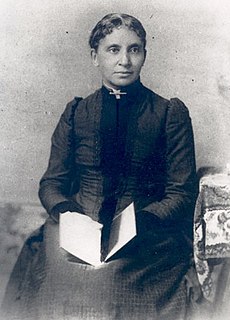 Charlotte Louise Bridges Forten Grimké was an African American anti-slavery activist, poet, and educator. She grew up in a prominent abolitionist family in Philadelphia. She taught school for years, including during the Civil War, to freedmen in South Carolina. Later in life she married Francis James Grimké, a Presbyterian minister who led a major church in Washington, DC, for decades. He was a nephew of the abolitionist Grimké sisters and was active in civil rights. 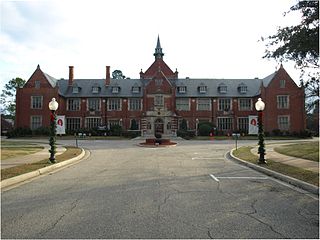 Josephine Sophia White Griffing was an American reformer who campaigned against slavery and for women's rights. She was born in Hebron, Connecticut on December 18, 1814 but later settled in Litchfield, Ohio. There she worked as a lecturer for the Western Anti-Slavery Society and Ohio Women's Rights Association. At the end of the American Civil War she moved to Washington, D.C., to help work with the unemployed freedmen. Much of her work was done through the Freedmen's Bureau, where she worked as an assistant to the assistant commissioner and as an agent. Griffing was also active in several women's rights organizations. She died in Washington, D.C. on February 18, 1872.

Laura Wheeler Waring was an African-American artist and educator, best known for her paintings of prominent African Americans that she made during the Harlem Renaissance. She taught art for more than 30 years at Cheyney University in Pennsylvania.

Twickenham Historic District was the first historic district designated in Huntsville, Alabama, USA. It was added to the National Register of Historic Places on January 4, 1973, with a boundary increase on May 26, 2015. The name derives from an early name for the town of Huntsville, named after Twickenham, England, by LeRoy Pope. It features homes in the Federal and Greek Revival architectural styles introduced to the city by Virginia-born architect George Steele about 1818, and contains the most dense concentration of antebellum homes in Alabama. The 1819 Weeden House Museum, home of female artist and poet Maria Howard Weeden, is open to the public, as are several others in the district. 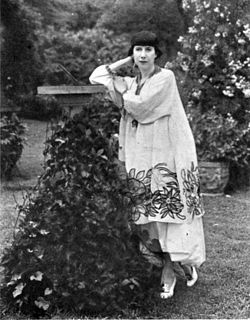 Weeden may refer to: 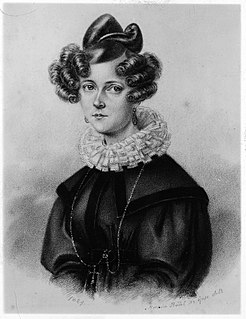 Maria Christina Röhl was a Swedish portrait artist. She made portraits of many of the best known people in Sweden in the first half of the 19th century. Her paintings are exhibited at the national museum Nationalmuseum in Stockholm. The Swedish Royal library has a collection of 1800 portraits by her. She was a member of the Royal Swedish Academy of Arts (1843) and an official portrait artist of the royal court.

The Alabama Women's Hall of Fame honors the achievements of women associated with the U.S. state of Alabama. Established in 1970, the first women were inducted the following year. The museum is located in Bean Hall, a former Carnegie Library, on the campus of Judson College in Marion, Alabama. It became a state agency in 1975 by an act of the Alabama Legislature. The organization is governed by an eleven-member board. They are elected to three-year terms with a minimum of one board member from the fields of art, business, community service, education, law, medicine, politics, religion, and science. In addition to the board, the President of Judson College and Governor of Alabama both serve as voting members. 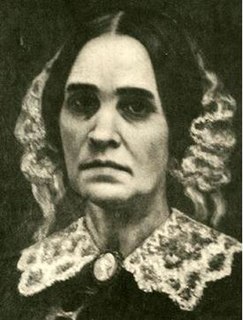 Julia Tarrant Barron (1805–1890) was a founder of Judson College in Marion, Alabama and Howard College in Homewood, Alabama. She also co-founded The Alabama Baptist newspaper with pastor Milo P. Jewett and donated the land for the construction of the Siloam Baptist Church. She was posthumously inducted into the Alabama Women's Hall of Fame. 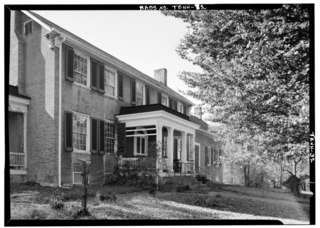 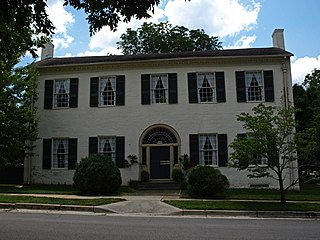 The Weeden House Museum is a historic two-story house in Huntsville, Alabama. It was built in 1819 for Henry C. Bradford, and designed in the Federal architectural style. Until 1845, it was sold and purchased by several home owners, including John McKinley, who served as a Congressman, Senator, and Associate Justice of the Supreme Court of the United States. From 1845 to 1956, it belonged to the Weeden family. During the American Civil War of 1861-1865, the Union Army took over the house while the Weedens moved to Tuskegee; they moved back in after the war. Portraitist and poet Maria Howard Weeden spent most of her life in the house. After it was sold by the Weeden family in 1956, the house was remodelled into residential apartments. In 1973, it was purchased by the city of Huntsville and the Twickenham Historic Preservation District Association restored it before they acquired it from the city. The private residence became a house museum in 1981.

Frances Cabaniss Roberts was an American historian. She was a founding member of the University of Alabama in Huntsville who was posthumously inducted into the Alabama Women's Hall of Fame. 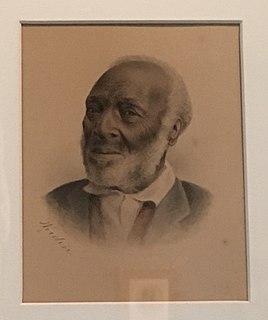 The Portrait of Saint Bartley Harris is a late-nineteenth century watercolor portrait by Maria Howard Weeden, an artist from Huntsville, Alabama.