Maria Josepha of Saxony (Maria Josepha Karolina Eleonore Franziska Xaveria; 4 November 1731 – 13 March 1767) was a Dauphine of France from the age of fifteen through her marriage to Louis de France, the son and heir of Louis XV. Marie Josèphe was the mother of three kings of France, including Louis XVI, as well as Madame Élisabeth.

Dauphin Louis, eldest son of King Louis XV of France, was widowed on 22 July 1746 when his wife, Maria Teresa Rafaela, died giving birth to their only child, a daughter named after herself. King Ferdinand VI of Spain, Maria Teresa Rafaela's half-brother, had offered the Dauphin another Spanish princess, Maria Antonietta. Instead, the King of France and his all-powerful mistress Madame de Pompadour wanted to open up diplomatic channels.

The marriage between Maria Josepha and the Dauphin had first been suggested by her uncle Maurice de Saxe. Louis XV and his mistress were convinced that the marriage would be advantageous to French foreign affairs. France and Saxony had been on opposing sides in the recent War of the Austrian Succession and thus the marriage between the Saxon princess and the Dauphin would form a new alliance between the two nations. There was one problem with the suggested bride: Maria Josepha's grandfather Augustus II of Poland had deposed Stanisław I Leszczyński from the Polish throne. Leszczyński was the father of Maria Leszczyńska, Louis XV's wife and mother of the Dauphin. The marriage was said to have humiliated the simple-living Queen, even though she and Maria Josepha would later get on well.

Other proposals came from Savoy in the form of Princess Eleonora of Savoy or her sister Maria Luisa of Savoy. Both were refused. Despite the disapproval of the Queen, Maria Josepha married the Dauphin on 9 February 1747.

Prior to the marriage, tradition demanded that the bride wear a bracelet which had a picture of her father on it; the Queen seeing the Dauphine asked to see the bracelet. The witty Maria Josepha then revealing the bracelet to the Queen showed a portrait of the Queen's father. The Dauphine said that the portrait represented the fact that the Duke of Lorraine was Maria Josepha's grandfather by marriage. The Queen and the court were strongly impressed by the tact of this girl of 15 years. The Dauphine was also very close to her father-in-law Louis XV.

The new Dauphine was very grateful to Madame de Pompadour for helping arrange her marriage, and always maintained a good relationship with the royal mistress.

Like her husband, Maria Josepha was very devout. Together with her mother-in-law, she formed a counterbalance to the libertine behaviour of her father-in-law and his court. The couple were not fond of the various entertainments held at Versailles every week, preferring to stay in their apartments which can still be seen on the ground floor of Versailles overlooking the Orangerie .

The couple's first child was a daughter, born in 1750 on the feast day of Saint Zephyrinus and named Marie Zéphyrine. The birth was greeted with much joy by her parents even though Louis XV had been disappointed the child was not a male. She died in 1755. [3] Their second child, Louis, was born on 15 September 1751. The royal couple concentrated so much time and energy on their eldest son that their other children suffered from neglect. He died on 22 March 1761 after having fallen from a toy horse. He started limping and a tumour began to grow on his hip. This was operated on, but he never recovered the use of his legs. The couple's second son, Xavier, was born in 1753, and died a year later. As a result, their third son, Louis Auguste, born on 23 August 1754, became second in line to the French throne after his father.

Thanks to Maria Josepha's close relationship with the King and the Dauphin, the relationship between father and son was soon repaired. The Dauphin was at the center of the Dévots , a group of religious-minded men who hoped to gain power when he succeeded to the throne. They were against the way Louis XV openly had affairs at court in blatant view of the Queen. Naturally they were not popular with Louis XV.

Her father-in-law named his loving daughter-in-law la triste Pepa; in 1756, Frederick II of Prussia invaded her native Saxony and that started the Seven Years' War, which France later joined. Politically reserved, she exerted herself only once, in 1762, in vain, for the preservation of the Society of Jesus in France. The Society had been dissolved by order of the Parlement of Paris, inspired by Jansenist magistrates, against the will of the King.

The death of her husband, on 20 December 1765, dealt Maria Josepha a devastating blow from which she never recovered, sinking into a deep depression which lasted till her own death 15 months later. To save her the torment of remaining with memories of her dead husband, Louis XV re-arranged the allocation of apartments within Versailles, so that Maria Josepha moved out of the apartments that she had shared with her husband and into the apartments of Madame de Pompadour, who had died in 1764. There, the king visited her more than he had in the past, paid her many kind attentions, and discussed with her the possible wedding of her son, the new dauphin. Maria Josepha was not pleased with the idea of her eldest son marrying a daughter of Maria Theresa of Austria, in whose favour Maria Josepha's own mother (a cousin of Maria Theresa) had been disinherited.[ citation needed ]

Soon, Maria Josepha's health declined. She died on 13 March 1767 of tuberculosis, and was buried in the Cathedral of Saint-Étienne in Sens. The marriage of her son, the future Louis XVl, with Maria Theresa's daughter Marie Antoinette was celebrated three years later. 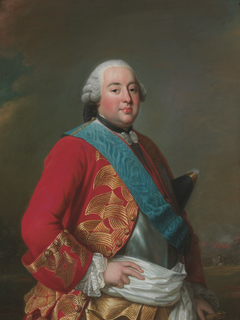 Maria Theresa of Spain, was by birth Infanta of Spain and Portugal and Archduchess of Austria as member of the Spanish branch of the House of Habsburg and by marriage Queen of France.

Maria Karolina Zofia Felicja Leszczyńska, also known as Marie Leczinska, was a Polish princess and Queen consort of France from 1725 until 1768 by marriage to Louis XV. The daughter of King Stanislaus I of Poland and Catherine Opalińska, her 42-year service was the longest of any queen in French history. A devout Roman Catholic throughout her life, Marie was popular among the French people for her generosity and introduced many Polish customs to the royal court at Versailles. She was the grandmother of Louis XVI, Louis XVIII and Charles X of France. 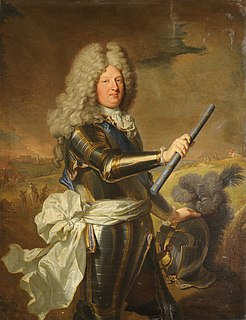 Louis of France was the eldest son and heir of Louis XIV, King of France, and his spouse, Maria Theresa of Spain. As the heir apparent to the French throne, he was styled Dauphin. He became known as Le Grand Dauphin after the birth of his own son, Le Petit Dauphin. As he died before his father, he never became king. His grandson became Louis XV of France. 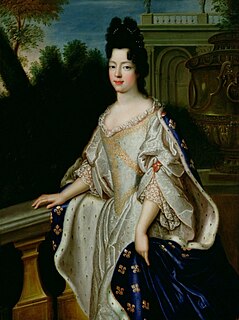 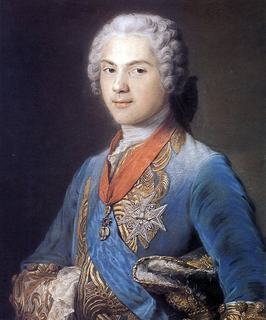 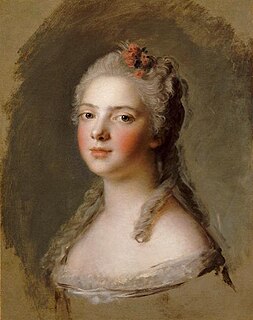 Marie Adélaïde de France,, was a French princess, the sixth child and the fourth daughter of King Louis XV of France and his consort, Marie Leszczyńska.

Maria Anna Victoria of Bavaria was Dauphine of France by marriage to Louis, Grand Dauphin, son and heir of Louis XIV. She was known as the Dauphine Marie Anne Victoire or la Grande Dauphine. The dauphine was regarded a "pathetic" figure at the court of France, isolated and unappreciated due to the perception that she was dull, unattractive and sickly. 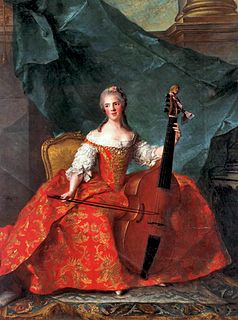 Anne Henriette of France(14 August 1727 – 10 February 1752) was a French princess, the twin of Louise Élisabeth of France, and the second child of King Louis XV of France and queen consort Marie Leszczyńska. 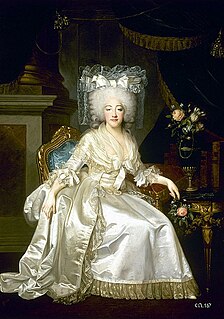 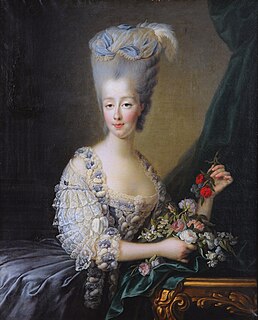 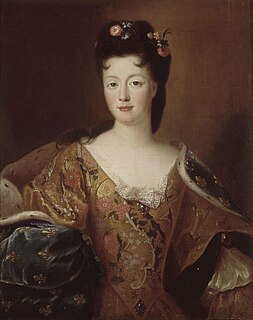 Élisabeth Charlotte d'Orléans was a petite-fille de France, and duchess of Lorraine and Bar by marriage to Leopold, Duke of Lorraine. She was regent of Lorraine and Bar during the minority (1729–1730) and absence of her son (1730–1737), and suo jure Princess of Commercy 1737–1744. Among her children was Francis I, Holy Roman Emperor, a co-founder of the royal House of Habsburg-Lorraine. 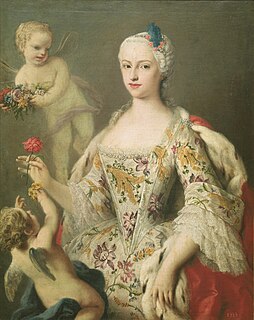 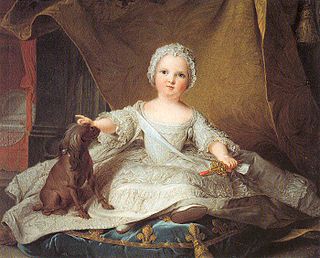 Marie Zéphyrine of France was a French princess, the daughter of Louis, Dauphin of France, and Maria Josepha of Saxony. 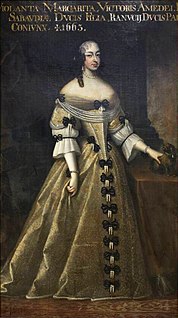