Last updated February 20, 2021
For other people with the same name, see Maria of Portugal.
Infanta of Portugal, Princess of Asturias, Duchess of Milan

Dona Maria Manuela (15 October 1527 – 12 July 1545 [1] ) was the eldest daughter and second child of King John III of Portugal and his wife Catherine of Austria. She was Princess of Asturias and Duchess of Milan as the first wife of the future Philip II of Spain, and Princess of Portugal as heir presumptive to the Portuguese throne between 1527 and 1535.

Maria was born in Coimbra on 15 October 1527 and was one of the two children of John III to survive childhood. In her youth, Maria received a humanistic education that was considered typical for a princess of her time. [2]

She married her double cousin Philip II of Spain on 12 November 1543 at Salamanca. [3] As she was to be married to the Prince of Asturias, heir apparent to the Spanish crown, and being an Infanta of Portugal, their wedding became one of the most remarkable in the history of Spain due to its opulence. Contemporary writers have left detailed descriptions of the journey from Madrid to Badajoz to Salamanca to receive the princess and of the luxuries she was given by the Duke of Medina Sidonia in Badajoz.

She gave birth to their son Carlos on 8 July 1545 in Valladolid, but died four days later due to a haemorrhage. [4] She was initially buried in the Royal Chapel of Granada on 30 March 1549 but was later transferred to Royal Crypt of the Monastery of El Escorial.

Anne of Austria, a Spanish princess and an Austrian archduchess of the House of Habsburg, was queen of France as the wife of Louis XIII, and powerful regent of France during the minority of her son, Louis XIV, from 1643 to 1651. During her regency, Cardinal Mazarin served as France's chief minister. Accounts of French court life of her era emphasize her difficult marital relations with her husband, her closeness to her son Louis XIV, and her disapproval of her son's marital infidelity to her niece and daughter-in-law Maria Theresa. 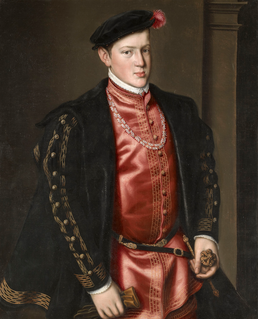 Elisabeth of Valois was Queen of Spain as the third spouse of Philip II of Spain. She was the eldest daughter of Henry II of France and Catherine de' Medici. 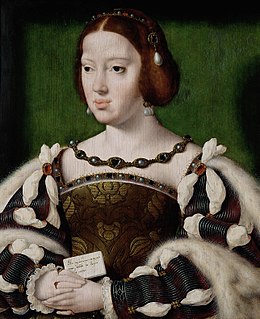 Elisabeth of France or Isabella of Bourbon was Queen of Spain from 1621 to her death and Portugal from 1621 to 1640, as the first spouse of King Philip IV & III. She served as regent of Spain during the Catalan Revolt in 1640-42 and 1643-44. She was the eldest daughter of King Henry IV of France and his second spouse Marie de' Medici. 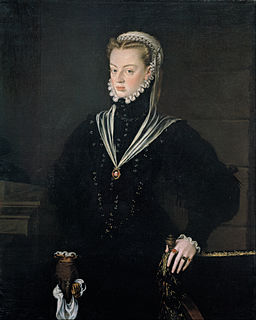 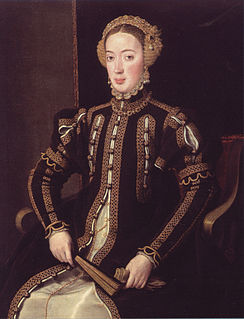 Princess Januária of Brazil was a Brazilian princess and Portuguese infanta (princess). She was the second daughter of Pedro I of Brazil and IV of Portugal and his first wife, Archduchess Maria Leopoldina of Austria. 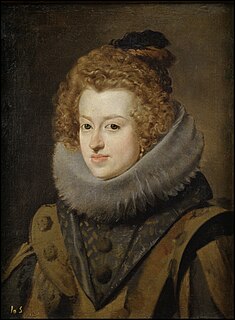 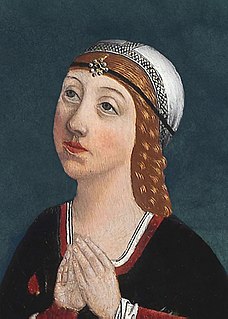 Archduchess Maria of Austria was the empress consort and queen consort of Maximilian II, Holy Roman Emperor, King of Bohemia and Hungary. She served as regent of Spain in the absence of her father Emperor Charles V from 1548 until 1551, and in the absence of her brother Philip II, from 1558 to 1561. 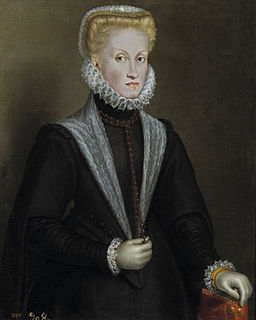 Anna of Austria was Queen of Spain by marriage to her uncle, King Philip II of Spain. During her last days of life she was also briefly queen of Portugal.

Marie Thérèse was the fourth child and third daughter of King Louis XIV of France and his wife, Maria Theresa of Spain. As the king's daughter, she was a Fille de France and was known at court by the traditional honorific of Madame Royale because she was the king's eldest surviving daughter. She did not survive childhood, dying at the age of five due to tuberculosis. 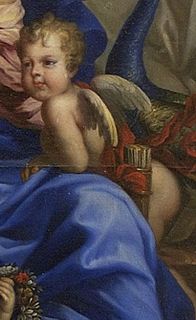 Philippe-Charles, Duke of Anjou was the fifth child and second son of King Louis XIV of France and Maria Theresa of Spain, and as such was a fils de France.

Marie Elisabeth of France, was a French princess and member of the House of Valois.