Vinogradov or Vinogradoff is a common Russian last name derived from the Russian word виноград. Vinogradova is a feminine version of the same name. Notable people with the surname include: 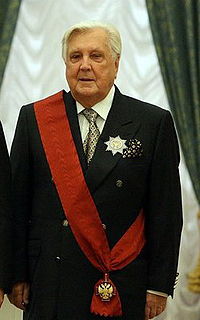 Ilya Glazunov was a Russian artist from Saint Petersburg. He was the founder of the Russian Academy of Painting, Sculpture and Architecture in Moscow where he also served as a rector up until his death. He held the title of People's Artist of Russia. 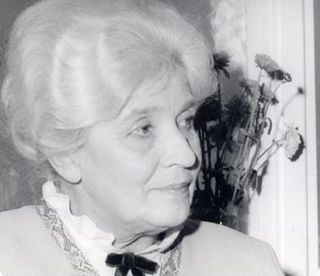 Professor Olga S. Vinogradova (1929–2001) was a specialist in Russian cognitive neuroscience. In 1969 she founded the Laboratory of Systemic Organization of Neurons in the Institute of Biological Physics, Russian Academy of Sciences (Pushchino) and headed this Laboratory till the end of her life.

Ekaterina Vinogradova is a Russian-born biathlete and cross-country skier. She competed for Belarus, then for the United States and now competes for Armenia.

Wolfhound is a 1991 Soviet action film by Mikhail Tumanishvili.

Galina Vladimirovna Vinogradova is a Russian orienteering competitor. She received her first medal in the relay event at the 2008 World Orienteering Championships in Olomouc, coming second together with Yulia Novikova and Tatiana Ryabkina., and also finished 4th in the Sprint Discipline.

Dead Souls is a 1984 Soviet television miniseries directed by Mikhail Schweitzer, based on Nikolai Gogol's epic poem of the same name. This story has been shared in many different interpretations. In 1930, author Mikhail Bulgakov was commissioned to write the first adaptation of this novel for the Soviet stage at the Moscow Art Theater. The 1984 miniseries was based on the 1960 film adaptation directed by Leonid Trauberg, which was inspired the Moscow Art Theater script. This story was also adapted as an opera in the 1980s as an American-Soviet production that first opened in Boston. The first cinematic interpretation of this work was directed by Pyotr Chardynin in 1909.

Anna Karamazoff is a 1991 Soviet drama film directed by Rustam Khamdamov. It was entered into the 1991 Cannes Film Festival.

We from the Urals is a 1944 Soviet drama film directed by Lev Kuleshov and Aleksandra Khokhlova.

The Independent Psychiatric Association of Russia (IPA) is the sole Russian non-governmental professional organization that makes non-forensic psychiatric expert examination at the request of citizens whose rights have been violated with the use of psychiatry. The IPA is not a state institution but a public organization, and its medical reports have not a legal but an ethical significance. There is nowhere to refute one's misdiagnosis in Russia. In recent years, the IPA forces restrictions on patients’ rights and transinstitutionalization of the mentally ill.

Valentina Kamenyok-Vinogradova was a volleyball player for the USSR. Born in Moscow, she competed for the Soviet Union at the 1964 and 1968 Summer Olympics.

Yekaterina Vinogradova is a Russian swimmer. She competed at the 2000 Summer Olympics in the 100 m and 200 m butterfly and finished in 31st and 18th place, respectively.

The 2015 Ladies Neva Cup was a professional tennis tournament played on indoor hard courts. It was the sixth of the tournament which is part of the 2015 ITF Women's Circuit, offering a total of $50,000 in prize money. It took place in Saint Petersburg, Russia, from 23 February to 1 March 2015.

Mister Iks is a Russian musical comedy film directed by Yuli Khmelnitsky. It is based on the Leningrad Theatre of Musical Comedy operetta of the same name from 1956. The operetta itself was a Russian adaptation of Emmerich Kálmán's Die Zirkusprinzessin.

The 2016 Neva Cup was a professional tennis tournament played on indoor hard courts. It was the 5th edition of the tournament and part of the 2016 ITF Women's Circuit, offering a total of $100,000 in prize money. It took place in Saint Petersburg, Russia, on 19–25 September 2016.

Iraida Vladimirovna Vinogradova was a Soviet and Russian Sámi poet who wrote in both Kildin and Ter Sámi, singer of Sámi songs, a scholar of the Ter Sámi language, and a member of the Kola Sámi Association.