Marian Irene Driscoll Jordan (April 15, 1898 – April 7, 1961) was an American actress and radio personality. She was most remembered for portraying the role of Molly McGee, the patient, common sense, honey-natured wife of Fibber McGee on the NBC radio series Fibber McGee and Molly from 1935 to 1959. She starred on this series opposite her real-life husband Jim Jordan. [1]

As a teenager and young adult, Driscoll gave music lessons and sang in choir at the church which she attended. While at choir practice one day, she met a member of the choir named James Edward "Jim" Jordan. The two were married on August 31, 1918. [3] They had two children together; a son and a daughter. The couple went on to have a long career in show business.

Their life as newlyweds started humbly. Marian became a piano teacher and Jim a mailman. Jim enlisted in the army and was eventually stationed in France during World War I. He contracted a case of influenza during the 1918 flu pandemic but survived. After the war ended, Jim stayed in Europe to do Vaudeville performances for wounded soldiers. [4]

Jordan was first heard on radio with her husband Jim in 1924 after a bet that Jim made with his brother. The couple's performance was a success. They began performing at WIBO, a radio station in Chicago where they earned $10 a week. [5]

In 1927, Marian and Jim began their second radio show, The Smith Family which aired on WENR radio in Chicago. [4] The show was a great boost to their career, ending in 1930.

Collaboration with Don Quinn and Smackout

In 1931, while in Chicago, the Jordans met cartoonist Don Quinn. The three of them created the radio comedy Smackout . The series starred Marian as a gossipy green-grocer. Jim played the manager of the grocery store. Marian was known for her catchphrase, "He was smack out of everything, 'cept hot air." [4]

The show, for which Don Quinn was head writer, was the Jordans' first nationwide success. It was also one of the first situation comedies (sitcoms).

"Smackout" ended in 1935 after its sponsorship was taken over by the Johnson Wax Company. [6] The Jordans and Don Quinn collaborated on the creation of a new show for Johnson Wax, Fibber McGee and Molly .

In 1938, the show and Jordan would both suffer major changes. During this time, Marian was drinking excessively. She entered a rehabilitation center in suburban Chicago and tried to get sober. The Jordan children were in high school and college. "Molly" was written out of the radio show, and the program was renamed Fibber McGee and Company. Those who knew Marian doubted that she would ever return to radio, especially after the show moved from Chicago to Los Angeles in 1939. However, Marian astonished everyone by travelling alone from Joliet, Illinois to Pasadena, California in March 1939. She was able to return to the character of "Molly," and some listeners considered her better than before.

The show received high ratings, from season three in 1938 until the end of its run. It also gave birth to a spin-off. In 1941, a recurring character, Throckmorton P. Gildersleeve, (played by Harold Peary), began a new show called The Great Gildersleeve . [9] The radio and television series Beulah was also a spin-off of Fibber McGee and Molly. [10]

Marian Jordan's health began to deteriorate in the 1950s. This was the beginning of the end both for the show and for Jordan. The program officially ended in 1956 but the Jordans continued their roles as Fibber McGee and Molly in short skits on the NBC radio program Monitor until October 2, 1959, when her poor health made her unable to continue. By the time Fibber McGee and Molly was adapted for television, Marian was too ill to reprise her role, and Cathy Lewis took her place, opposite Bob Sweeney as Fibber. Lewis's darker take on the character was a factor in the television series' cancellation after only a half-season.

In the 1920s, Jordan did a radio show in Chicago entitled Luke and Mirandy. She played the role of Mirandy with her husband Jim as Luke. It was a farm-report program in which Luke told tall tales and face-saving lies for comedic effect. [9]

Marian Jordan also appeared as Molly in six movies based on Fibber McGee and Molly.

The deterioration of Marian's health began in 1938 during the run of Fibber McGee and Molly. She battled alcoholism, and entered a rehabilitation center. She returned to radio in April, 1939. [12]

In 1953, Jordan's health became progressively worse. She became exhausted and easily fatigued. A doctor suggested she take a long rest, but she refused, deciding instead to continue performing. The Fibber McGee and Molly program was then recorded from the Jordans' home in Encino. The music was pre-recorded, and the commercials were no longer part of the show, but her failing health soon ended the Fibber McGee and Molly show.

Marian Jordan died at her home in Encino on April 7, 1961, of cancer. She and Jim Jordan are buried at the Holy Cross Cemetery in Culver City, California.

Fibber McGee and Molly was inducted into the Radio Hall of Fame in 1989. [14] Marian and Jim Jordan were inducted the same year. [15]

Jordan also has a star for her contributions to radio on the Hollywood Walk of Fame at 1500 Vine Street. [11] 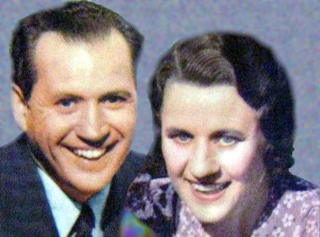 Fibber McGee and Molly was a 1935–1959 American radio comedy series. The situation comedy was a staple of the NBC Red Network from 1936 on after having begun on NBC Blue in 1935. One of the most popular and enduring radio series of its time, it ran as a stand-alone series from 1935 to 1956, and then continued as a short-form series as part of the weekend Monitor from 1957 to 1959. The title characters were created and portrayed by Jim and Marian Jordan, a real-life husband and wife team that had been working in radio since the 1920s. 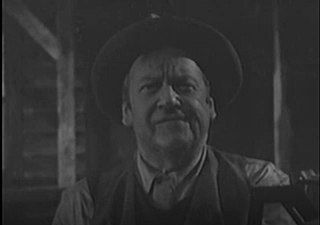 Arthur Quirk Bryan was an American actor, comedian and radio personality, best remembered for his longtime recurring role as well-spoken, wisecracking Dr. Gamble on the radio comedy Fibber McGee and Molly and for creating the voice of the Warner Brothers cartoon character Elmer Fudd.

James Edward Jordan was the American actor who played Fibber McGee in Fibber McGee and Molly and voiced the albatross Orville in Disney's The Rescuers (1977).

WSCR – branded 670 The Score – is a commercial sports radio station licensed to serve Chicago, Illinois, servicing the Chicago metropolitan area and much of surrounding Northern Illinois, Northwest Indiana and parts of the Milwaukee metropolitan area. Owned by Entercom, WSCR is a clear-channel station with extended nighttime range in most of the Central United States and part of the Eastern United States. WSCR serves as the Chicago affiliate for CBS Sports Radio, the Fighting Illini Sports Network and the NFL on Westwood One Sports; the flagship station for the Chicago Cubs and Chicago Bulls radio networks; and the home of radio personalities David Haugh and Matt Spiegel.

The Halls of Ivy is an American situation comedy that ran from 1950 to 1952 on NBC radio, created by Fibber McGee & Molly co-creator/writer Don Quinn. The series was adapted into a CBS television comedy (1954–55) produced by ITC Entertainment and Television Programs of America. British husband-and-wife actors Ronald Colman and Benita Hume starred in both versions of the show.

Marlin Hurt was an American stage entertainer and radio actor who was best known for originating the dialect comedy role of Beulah made famous on the Fibber McGee and Molly program and the first season of the Beulah radio series. 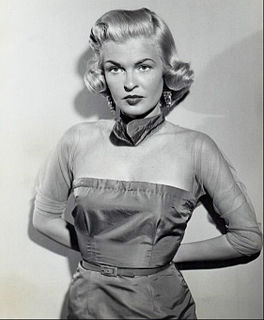 In media, a spin-off is a radio program, television program, video game, film, or any narrative work, derived from already existing works that focus on more details and different aspects from the original work.

This Way Please is a 1937 American musical comedy directed by Robert Florey and featuring Charles Rogers, a popular singer from the days of vaudeville entertainment.

Don Quinn was an American comedy writer who started out as a cartoonist based in Chicago. According to sources, Quinn's career as a cartoonist was short-lived but his career as a writer began after he realized that the magazines and newspapers threw away his drawings he sent in but kept his captions.

Look Who's Laughing is a 1941 film from RKO Radio Pictures. The film is built around a number of radio stars from the Golden Age of Radio and centers around radio personality Jim Jordan as Fibber McGee from the comic duo, Fibber McGee and Molly, who plans to build an aircraft factory in a small town. Look Who's Laughing was followed by Here We Go Again (1942), with many of the radio stars reprising their performances. 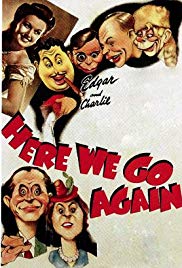 Here We Go Again is a 1942 American film, a sequel to Look Who's Laughing. With RKO in financial trouble, with the success of the earlier zany comedy starring a bevy of radio stars, Here We Go Again put Fibber McGee and Molly in a search for where to celebrate the couple's 20th anniversary. They want to throw a big party but when everyone declines their invitation, they decide to go on a second honeymoon instead. 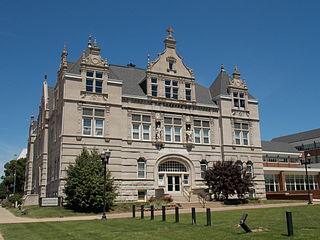 Academy of Our Lady and Spalding Institute were Catholic high schools across the street from each other in downtown Peoria, Illinois.

Heavenly Days is a 1944 film starring Fibber McGee and Molly. It was the third and final feature film to feature the popular radio characters; unlike the two previous entries, none of the radio show's supporting cast members appeared in this film. 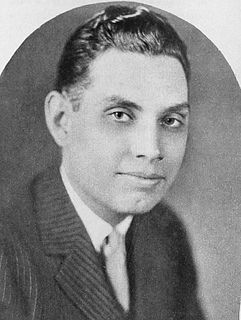 Harlow Wilcox was an American radio announcer best known for his work on the radio sitcom Fibber McGee and Molly.

Smackout was an American old-time radio series and was arguably the first and earliest example of the situation comedy (sitcom) genre and format. The series revolves around a general store in Chicago and the store's proprietor Luke Gray, played by Jim Jordan. Whenever a customer came into the general store to ask Uncle Luke, as Gray was affectionately known, for something, the typical response from Luke would be "we're smack out of that". But that never stopped Luke from telling one of his signature tall tales to the customer. Jordan also played a regular customer named Jim and Marian Jordan portrayed the main roles as Teeny, a little girl and regular customer, and Marian, Jim's girlfriend.