Mariano Lebrón Saviñón (Santo Domingo, 3 August 1922 - 18 October 2014) was a Dominican author of the 20th century. One of the founders of the second private university in the Dominican Republic, he named it the Universidad Nacional Pedro Henríquez Ureña, also writing its anthem. He was born on August 3, 1922 in Santo Domingo, the son of a Spanish immigrant, José Lebrón Morales (a native of Seville, southern Spain), and a Dominican mother, Rosa Cándida Saviñón Pérez, of Canarian descent. He attended primary and secondary education in Santo Domingo. He received his medical degree at the University of Santo Domingo in 1946, and in 1949 (specializing in pediatrics) in Buenos Aires, Argentina.

He directed the hospital of Santo Domingo Social Prevention and worked in the Ministry of Health, the Ramfis hospital, Father Billini Hospital, and several medical clinics in the country. Alongside the practice of medicine, he was Director of Publications of the National University Pedro Henríquez Ureña and professor of medicine at the University and the Autonomous University of Santo Domingo.

He is one of the most influential writers from the Poesía Sorprendida (Surprised Poetry) movement, and made important contributions to the Dominican Academy of Medicine, and the Institute Duartiano. In addition to his poetry and essays production, is author of the book History of the Dominican culture, one of the most ambitious of its kind in Dominican history.

Among numerous recognition he has received are: Commander of the Order of Merit of Duarte, Sánchez and Mella, Caonabo Gold in 1988, Vasconcelos National Prize Award from the Front Affirmation Hispanist of Mexico (1992) and Literature (1999), the highest honor bestowed by the letters in the Dominican Republic, and was the only Dominican chosen to be speaker the Prince of Asturias award, named by Prince Felipe de Borbon y Grecia. From 1984 to 2006 Lebrón chaired the Dominican Academy of Language.

In August 2014 he was admitted to a hospital due to frequent respiratory problems. [1] Because of the delicate state of his health he was readmitted in October. He eventually died at the age of 92 on October 18, 2014.

His surname Lebrón is of Spanish origin. [2] This surname is distributed throughout Spain (mostly in Seville) and Latin America. [3] Not to be confused with Lebron (originally Lebraun) concentrated mostly in Las Matas de Farfán,a town in the San Juan Province, of supposed Haitian/French origin. [4] [5] [6]

The Universidad Autónoma de Santo Domingo (UASD) is the public university system in the Dominican Republic with its flagship campus in the Ciudad Universitaria of Santo Domingo and with regional campuses in many cities of the Republic. It was founded by Jose Gabriel Garcia and Emiliano Tejera in 1866 as the Professional Institute, replacing the former Universidad Santo Tomás de Aquino, one of the first universities of the Western Hemisphere (Americas), which was founded unofficially by a Papal bull in 1538, officially by royal decree in 1558, and closed in 1822. It was later renamed University of Santo Domingo in 1914.

Mariasela Alvarez Lebrón is a Dominican architect, TV Host and beauty queen who was crowned Miss World 1982. She became the first Dominican woman to win an international beauty title. Álvarez achieved much popularity in her native country, due to her long career on television, which included a successful eight-year run with her award-winning show Esta Noche Mariasela. She is also an accomplished architect who has designed important buildings in the Dominican Republic.

Salomé Ureña was a Dominican poet and an early proponent of women's higher education in the Dominican Republic.

The first Jews known to have reached the island of Hispaniola were Spanish.

The Academia Dominicana de la Lengua is the Dominican Republic's correspondent academy of the Royal Spanish Academy. It was founded in Santo Domingo on 12 October 1927 and, like the other academies, has the principal function of working to regulate the Spanish language. 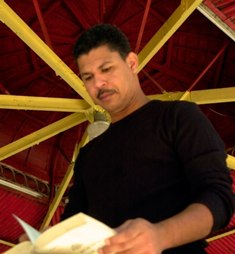 Lebrón is a surname originating in Spain, where it is most prevalent in the Autonomous Community of Andalucía. It is an augmentative of liebre. Lebrón is sometimes transliterated into an English given name as Lebron or LeBron, although these forms can also be derived from the French surnames Lebrun or Le Brun, meaning "the brown". People with the name include:

Francisco Hilario Henríquez y Carvajal was a doctor, lawyer, writer, educator and politician from the Dominican Republic, who served as president just prior to the US occupation of the country. He married Salomé Ureña. He had 4 children, Pedro, Francisco, Max, and Camila.

Miguel D. Mena is a Dominican writer, poet, essayist and publisher. He studied sociology in the Autonomous University of Santo Domingo where he graduated in 1986 with the thesis Ciudad, espacio y poder en Republica Dominicanca. He continued his research on the city of Santo Domingo in Germany where he has been living since 1990. His Phd from the Free University of Berlin has been recently published under the title: Iglesia, Espacio y Poder: Santo Domingo (1498–1521) Experiencia Fundacional del Nuevo Mundo. He has also written a collections of essays about the urban cuestion in the Dominican Republic and hundred of articles for newspapers and magazines about contemporary aspects of the Dominican capital. He has also written extensively about Dominican literature and especially about Vanguardism in the Dominican literature. He has been one of the leading figures in independent publishing since the mid eighties in Dominican Republic. He is now at the head of “Cielonaranja Ediciones”

Colonel Juan Bautista Alfonseca Baris was a military officer and composer in the Dominican Republic, known for his role in the development of merengue music. Though the music written by Alfonseca was not, at the time, specifically labeled as "merengue", its incorporation of Dominican folk motifs into Latin formal music such as the danza paved the way for that genre, causing many to label him "the father of merengue".

Arístides Victoria Yeb is a politician from the Dominican Republic.

Camila Henríquez Ureña, was a writer, essayist, educator and literary critic from the Dominican Republic who became a naturalized Cuban citizen. She descended from a family of writers, thinkers and educators; both her parents, Francisco Henríquez y Carvajal and Salomé Ureña, as well as her brothers Pedro and Max, were literary luminaries. Her essays have been published in Instrucción Pública, Ultra, Archipiélago, Casa de las Américas, La Gaceta de Cuba, Revista de la Biblioteca Nacional, Revista de la Universidad de La Habana, and Revista Lyceum. A feminist and a humanist, she lectured during much of her career, advocating intellectual study for women.

Pierre André Frier Roche was a French military and musician known for his involvement in the military campaigns of Haitian president Fabré Geffrard and the Dominican president Buenaventura Baez during the second half of the 19th century in Hispaniola.

Dr. Juan Vicente Moscoco Carvajal, nicknamed the "Dominican Socrates", was a lawyer, politician, educator and assessor of the royal artillery of Santo Domingo. He was mayor of Santo Domingo during the period of España Boba, among other public offices. He obtained a doctorate of canon law and civic law from the University of Santo Tomas de Aquino in 1791.

Celsa Albert Batista is a black Dominican academic, writer and historian. She wrote one of the major works on slavery and is one of the few scholars who have focused on black identity in the Dominican Republic. Widely recognized for her work, she has received the Pedro Henríquez Ureña Gold Medal from the Government of the Dominican Republic, the International José Martí Prize from the United Nations Educational, Scientific and Cultural Organization (UNESCO), the Order of Merit of Duarte, Sánchez and Mella, among other honors.