During the winter, the pass is the only way to cross the Continental Divide by road in the U.S. north of Montana's Rogers Pass (distinguished from British Columbia's Rogers Pass), because of the Bob Marshall Wilderness Complex.

The pass was charted in December 1889 by John Frank Stevens, principal engineer of the Great Northern Railway (GN). [1] The location of the pass had been rumored for several years beforehand, but it took Stevens and a Flathead guide named Coonsah, who had been hiding out with the Blackfoot in Browning, to discover it.

The pass proved ideal for a railroad, because its approach was broad and open, within a valley ranging from one to six miles wide, and at a gentle grade that would not require extensive excavation or rockwork. Construction of the railroad through the pass began on August 1, 1890, starting from Fort Assinniboine toward Marias Pass. The railroad followed the Middle Fork of the Flathead River west of the Continental Divide. [2]

Stevens also discovered the pass across the Cascades in central Washington which bears his name.

A memorial to President Theodore Roosevelt was constructed along the Continental Divide at the top of the pass. Construction began in 1930, with the original intent to produce a granite archway across the highway, and a cornerstone was placed to the southeast of the highway. Eleanor Roosevelt was later on hand to place a small copper box filled with a copy of the bill that appropriated funds for the memorial as well as some other documents into the cornerstone. The obelisk is sixty feet (18 m) in height and extends nineteen feet (5.8 m) into the ground. It has a tapering cement core covered on all sides with seven-inch (18 cm) slabs of Montana granite quarried near Helena. It was later decided to build an obelisk instead of an archway; it was completed 89 years ago in 1931. [3]

Today, U.S. Route 2 uses the pass, along with the BNSF Railway, a successor to the Great Northern Railway. The railway line, which sees freight traffic, as well as Amtrak's Empire Builder , is part of BNSF's Northern Transcon line linking Chicago and the Pacific Northwest. A statue of Stevens stands at the summit of Marias Pass. [1] 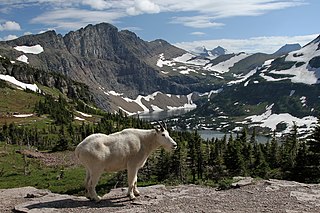 Stevens Pass is a mountain pass through the Cascade Mountains located at the border of King County and Chelan County in Washington, United States. U.S. Route 2 travels over the pass, reaching a maximum elevation of 5,845 feet (1,782 m). The Pacific Crest Trail crosses the highway at Stevens Pass. The BNSF Railway's Cascade Tunnel lies 1,180 feet (400 m) below the pass summit.

Montana Rail Link is a privately held Class II railroad in the United States. MRL, which operates on trackage originally built by the Northern Pacific Railway, is a unit of The Washington Companies, and is headquartered in Missoula, Montana.

The Bob Marshall Wilderness Area is a Congressionally designated wilderness area located in western Montana in the United States. It is named after Bob Marshall (1901–1939), an early forester in the federal government, conservationist, and co-founder of The Wilderness Society. In the 1930s while working for the US Forest Service, Marshall was largely responsible for designation of large areas to be preserved as roadless within lands administered by the U.S. Forest Service; he achieved this through promulgation of various regulations. Formally designated in 1964, the Bob Marshall Wilderness extends for 60 miles (95 km) along the Continental Divide and consists of 1,009,356 acres (4,085 km²). 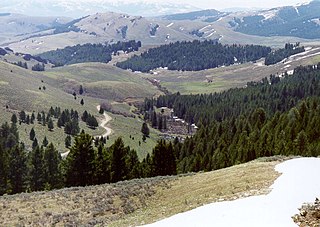 Lewis and Clark National Forest is located in west central Montana, United States. Spanning 2,912 square miles (7,500 km2), the forest is managed as two separate zones. The eastern sections, under the Jefferson Division, is a mixture of grass and shrublands dotted with "island" pockets of forested areas. Here, cattle leases to local ranchers as well as timber harvesting are the norm. The western Rocky Mountain Division, which straddles the Continental divide, is managed chiefly for environmental preservation, as much of the land has been designated as wilderness. Forest headquarters are located in Great Falls, Montana. Local ranger district offices have been established in Choteau, Harlowton, Neihart, Stanford, and White Sulphur Springs.

The Lewis Range is a mountain range located in the Rocky Mountains of northern Montana, United States and extreme southern Alberta, Canada. It was formed as a result of the Lewis Overthrust, a geologic thrust fault resulted in the overlying of younger Cretaceous rocks by older Proterozoic rocks. The range is located within Waterton Lakes National Park in Alberta, Canada and Glacier National Park and the Bob Marshall Wilderness Complex in Montana, United States. The highest peak is Mount Cleveland at 10,466 ft (3,190 m).

West Glacier is an unincorporated community and census-designated place (CDP) in eastern Flathead County, Montana, United States. As of the 2010 census it had a population of 227. The town is at the west entrance to Glacier National Park and is located on U.S. Route 2 and a main line of the BNSF Railway. The headquarters complex for Glacier National Park is located nearby.

Rogers Pass is a mountain pass that rises 5,610 feet (1,710 m) above sea level and is located on the Continental Divide in the U.S. state of Montana. The pass is adjacent to Helena National Forest and is traversed by Montana Highway 200, providing the shortest route between the cities of Great Falls and Missoula, Montana.

Homestake Pass is a mountain pass in the Rocky Mountains of Montana in the United States. It sits on the Continental Divide on the border between Jefferson County and Silver Bow County, six miles south-southeast of Butte in Beaverhead-Deerlodge National Forest at an elevation of 6,329 feet (1,929 m). The pass carries Interstate 90 across the Continental Divide and is the highest point on the 3,020 mi (4,861 km) highway. 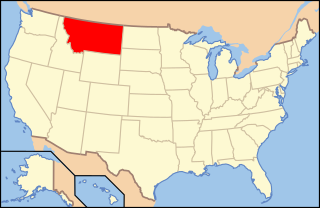 The following is an alphabetical list of articles related to the U.S. state of Montana.

The Theodore Roosevelt International Highway was a transcontinental North American highway, from the era of the auto trails, through the United States and Canada that ran from Portland, Maine, to Portland, Oregon. Its length was about 4,060 miles (6,530 km).

U.S. Highway 2 is an east–west United States Numbered Highway in the state of Montana. It extends approximately 666.6 miles (1,072.8 km) from the Idaho state line east to the North Dakota state line.

Lewis and Clark Pass is a mountain pass on the continental divide in Montana, United States, at an elevation of 6,424 feet (1,958 m) above sea level. The pass lies at the head of the drainages of the west-flowing Blackfoot River and the east-flowing Dearborn River, in the Helena National Forest in Lewis and Clark County. The Continental Divide Trail traverses north and south through the pass.

Bad Rock Canyon is a river canyon lying 2.64 miles (4.25 km) east of Columbia Falls, Montana. The Flathead River, flanked by U.S. Highway 2, flows through the canyon and enters Montana's Flathead Valley. Rock slides occur frequently along the northern side of the BNSF Railway tracks that run through the canyon.