Maribel Fernández is a Mexican actress.

Maribel Fernández has worked in many Mexican soap operas and telenovelas. She also worked with Chespirito, playing one of the versions of the character "Paty" in El Chavo del Ocho. Roberto Gómez Bolaños, more commonly known by his stage name Chespirito, or "Little Shakespeare" was a Mexican screenwriter, actor, comedian, film director, television director, playwright, singer, songwriter, and author. He is widely regarded as the most important Spanish-language humorist of all time.

El Chavo is a Mexican television sitcom that gained enormous popularity in Latin America as well as in Spain, the United States and other countries.

Itatí Cantoral is a Mexican actress, singer, dancer, and producer. She is best known for her roles as Soraya Montenegro in Televisa's telenovela María la del Barrio (1995) and as Alejandra Álvarez del Castillo Fernández "La Licenciada" in Televisa's telenovela Hasta Que El Dinero Nos Separe (2009). On November 18, 2015, Cantoral was named Mr. Amigo, which is an association in Brownsville, Texas that honors a Mexican citizen each year to promote international friendship and good will between the U.S. and Mexico. Itatí is the second member of the Cantoral family to be awarded Mr. Amigo after her father, Roberto Cantoral, was awarded in 1981.

Maribel Guardia is a Costa Rican and Mexican actress, model, singer and TV hostess. She was winner of Miss Costa Rica 1978 and contestant in Miss Universe 1978.

Rubí is a Mexican telenovela produced by José Alberto Castro for Televisa. It is based on a short story by Yolanda Vargas Dulché, published as a serial on the 1960s Mexican comic book Lágrimas, Risas y Amor. Bárbara Mori stars as the main protagonist, the heroine Rubí.

Maribel Guadalupe Domínguez Castelán is a former Mexican footballer who played for the Chicago Red Stars during 2013 season of the National Women's Soccer League, and was captain and leading scorer of the Mexico women's national football team. She is known internationally as "Marigol" for her record of 46 goals scored in 49 matches for the Mexico women's national team.

Miss Universe 1978, the 27th Miss Universe pageant, was held on 24 July 1978 at the Centro de Convenciones de Acapulco in Acapulco, Mexico. Margaret Gardiner of South Africa was crowned by Janelle Commissiong of Trinidad and Tobago at the end of the event. This is the first time South Africa won the pageant.

No temas al amor is a telenovela made by Mexican TV network Televisa. This telenovela was broadcast in 1980. This soap opera was televised on weekends only.

Salon Teotihuacan is a 6,000-seat indoor arena in Acapulco, Guerrero. It is the flagship exhibit hall of Centro Internacional Acapulco, and was built in 1973. It was the largest exhibit hall until the 2008 completion of the Mundo Imperial complex. However, the hall has successfully doubled as a sports and entertainment venue, the largest indoor arena in the state of Guerrero.

Plaza de las Estrellas is a shopping center located in Mexico City. It was built in 1982. It is best known as the site of the Paseo de las Luminarias, the Mexican equivalent of the Hollywood Walk of Fame. Gloria Funtanet, one of the Plaza's developers, created the Paseo to honor Mexicans and Latin-Americans in showbusiness, most notably the motion picture, television, theatrical, and recording industries, of which Mexico City is the center in Latin America. Since the Paseo's dedication, which coincided with the Plaza's opening, over 1,000 entertainers, mostly from Mexico, have been inducted. The inductees are honored with a star and their handprints embedded on square tiles. The Paseo is located in the upper level of the shopping center, and doubles as the main walkway to and from the stores located on that level.

Anabel Ferreira is a Mexican actress and comedian. Ferreira has been with Televisa from 1981 until 1996 and again since 2008. In between, she spent a decade at TV Azteca. Most recently appearing on the Televisa telenovela Soy tu dueña, she is best known as the star of her own comedy/variety series, ¡Anabel!. Ferreira still works in Mexico but now lives in Los Angeles, California. She has dual citizenship with Mexico & United States.

Amar otra vez(Loving again) is a Mexican telenovela produced by Lucero Suárez for Televisa in 2004. Starring Irán Castillo and Valentino Lanús with Rafael Amaya, Margarita Magaña, Roberto Ballesteros and Vanessa Guzman, in addition to its cast in Mexico's Sweetheart Angélica María as a suffering mother. 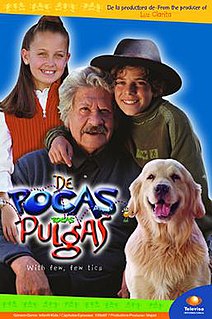 De pocas, pocas pulgas is a Mexican telenovela for children, produced by Mapat L. de Zatarain for Televisa in 2003. It is an adaptation of the 1992 telenovela El abuelo y yo.

Querer volar is a Mexican telenovela produced by Patricia Lozano for Televisa in 1980.

Muchachita is a Mexican telenovela produced by Carlos Téllez and Lucero Suárez for Televisa in 1986. It is an original story and adaptation of the fotonovela "Muchachita" of Ricardo Rentería. It starred Lourdes Munguía, Gonzalo Vega, Talina Fernández, Beatriz Aguirre and Manuel Saval.

Serafín, is a Mexican telenovela produced by José Alberto Castro for Televisa in 1999.

Tú y yo is a Mexican telenovela produced by Emilio Larrosa for Televisa in 1996.