The pitch was opened in 1924, and was the home ground of Drafn, Skiold and Drammens BK. The final of the 1932 Norwegian Football Cup, between Fredrikstad and Ørn was played at Marienlyst. [1] During the 1952 Winter Olympics in neighboring Oslo, the venue hosted two ice hockey matches. The venue hosted the Norwegian Athletics Championships in 1962 and 2001. [2] The Norway national under-21 football team has played eighteen games Marienlyst, making it their most-used venue. The first under-21 match was played in 1981. [3]

After a rebuild of the south end in 2014, and installation of safe standing seats, [4] the stadium has a capacity of 8,935. When using the seats, the capacity is 8,060. [5] The rebuild was done to ensure that the stadium would fulfill UEFA's regulations for a Category 4 stadium, [6] [7] which can be used for all Champions League or Europa League matches except the final. [8] [9]

The grass was removed in November 2007 to make way for artificial ice surface for winter sports, and artificial grass for summer sports. A new stadium was planned, but the project was abandoned due to financial difficulties. There are new plans to expand and rebuild the main stand. In a 2012 survey carried out by the Norwegian Players' Association among away-team captains, Marienlyst was ranked third-worst amongst league stadiums, with a score of 2.13 on a scale from one to five. [10] This was mainly due to the worn-out artificial turf, which was replaced in the summer of 2013.

The Gamle Gress (old Turf) is part of a sport complex, with the adjacent bandy field (artificial ice) and the athletics stadium next door as well as the sports hall for indoor athletics and handball.

This lists Strømsgodsets's most recent average league home attendances at Marienlyst. It also lists minimum and maximum league homeattendances from each season.

The Aker Stadion is an all-seater football stadium located at Reknes in Molde, Norway, and is the home of Eliteserien club Molde. The stadium has a current capacity of 11,249 spectators.

Viking Stadion, is a football stadium in Stavanger, Norway. It was inaugurated in May 2004 and cost 160 million NOK to build. 50 million NOK, plus the lot it was built on, was a gift from the municipality. It replaced Stavanger Stadion as the home stadium of Viking FK.

Color Line Stadion is an association football stadium in Ålesund, Norway, and the home of 1. divisjon side Aalesunds FK. It was inaugurated in April 2005 and cost NOK 160 million to build. It is referred to as Aalesund Stadion by UEFA, as naming rights arrangements is not included during UEFA competitions. 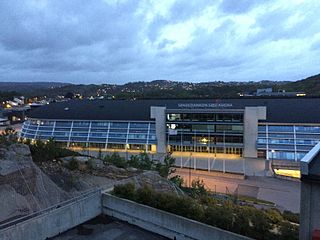 Sparebanken Sør Arena is a football stadium located at Torsvika in Kristiansand, Norway. The all-seater has a capacity of 14,563 people, and serves as the home ground of Tippeligaen side IK Start. It was designed by Kjell Kosberg, and is architecturally similar to Aker Stadion. The venue has seen concerts by Elton John, Dolly Parton and A-ha, among others.. UEFA refers to the stadium as Kristiansand Arena.

The Fredrikstad Stadion is a football stadium in Fredrikstad, Norway and home of the Norwegian First Division team Fredrikstad FK. It is located in an area which formerly used to be a large shipyard, but which nowadays is the technological centre of the city, with several companies and a college. The frontage of the stadium is built to replicate the original halls of the workshop. This makes it architecturally unique. The stadium was built to replace Old Fredrikstad Stadion, which was considered to be one of the eldest and most worn-out stadium in the country. The total capacity is approximately 12,560, all seated. There is a possibility to expand it furthermore, to some 15,000 seats.

Sandefjord Arena is the current stadium of Sandefjord Fotball. It was opened on 21 July 2007, when Lyn visited Sandefjord, and is still the match with the highest attendance of 8,103.

Gjemselund Stadion is a football stadium in Kongsvinger, Norway and the home ground of Norwegian second tier club Kongsvinger Idrettslag.

Extra Arena is the home ground of the Norwegian football club Ranheim Fotball. It is located in the city-area of Ranheim in the city of Trondheim. The stadion had to be enlarged to comply with Eliteserien guideline of a minimum of 3000 seats.

Jessheim Stadion is a football stadium located at Jessheim in Ullensaker, Norway. Opened in August 2011, it is home of the First Division side Ullensaker/Kisa IL (Ull/Kisa). The venue consists of an all-seater grandstand with 1,130 under-roof seats on the one long side and a media center on the other side. One of the stands on the short sides has a roof, the other has not. The pitch has artificial turf and the dimensions 105 by 68 meters.

Drammens Ballklubb is a Norwegian multi-sports club from Øren in Drammen. Founded 14 August 1909 as a merger of clubs Idun and Spring, the club was initially a football club only. It has currently sections for association football, cross-country skiing, bandy and Esports. The club had athletes in ski jumping, but that department is folded.

KFUM Arena is a football stadium located at Ekeberg in Oslo, Norway, and is the home of Norwegian 1. divisjon club KFUM Oslo. The stadium has a current capacity of approximately 1,500 spectators. KFUM is a translation of the English language YMCA.

Ågotnes Stadion is a multi-purpose stadium located at Ågotnes in Fjell, Norway, and is the home of Norwegian 1. divisjon club Øygarden and 4. divisjon club Nordre Fjell. The stadium has a current capacity of 1,200 spectators.