Marija Gorica (Croatian pronunciation:  [mǎrija ɡǒrit͡sa] ) is a municipality in western Zagreb County of Croatia on the border with Slovenia. According to the 2001 census, there are 2,089 inhabitants, the absolute majority are Croats.

This municipality is named after Virgin Mary, who is worshiped here. Marija is a Croatian form of the name Mary, while Gorica means "hill". Fossilized teeth of the extinct proboscid Deinotherium (also depicted on the municipal coat of arms) were found in Marija Gorica. [1] In Marija Gorica Croatian writer Ante Kovačić went to school. [2] This school is today named after him. [3] The mayor is Marica Jančić, who was born in Žlebec Gorički.

Zaprešić is a town in Zagreb County in Croatia. It has a population of 19,644 inhabitants in the town proper, with 25,223 in the administrative area. The town's metropolitan area, which encompasses the seven neighbouring municipalities, has a population of 54,640. Zaprešić is the third-largest, and most densely populated town of the county. It is located northwest of the Croatian capital Zagreb, and near the Slovenian border. It is centered on plains north of the Sava River, and is bordered by Medvednica Mountain to the east, and the Marija Gorica Hills to the west.

Magazin is a Croatian pop band from Split. Founded in 1979 under the name Dalmatinski magazin, the band quickly began to make a mark on local pop music festivals with its songs influenced by Dalmatian folk music. The band currently consists of lead vocalist Andrea Šušnjara, guitarist Željko Baričić and bass guitarist Nenad Vesanović Keko. Baričić is the only active founding member even though Vesanović featured on every album to date.

Antun "Ante" Kovačić was a Croatian writer who is best known for his magnum opus work U registraturi. 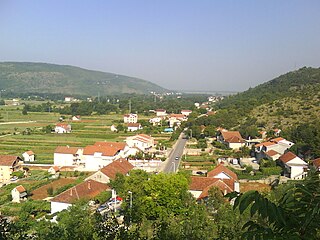 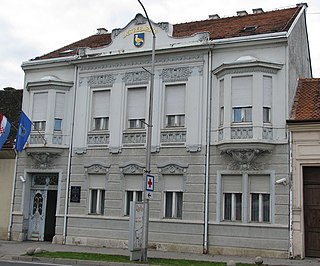 Jastrebarsko, colloquially known as Jaska, is a town in Zagreb County, Croatia.

Marija Bistrica is a village and municipality in the Krapina-Zagorje County in central Croatia, located on the slopes of the Medvednica mountain in the Hrvatsko Zagorje region north of the capital Zagreb. The municipality has 5,976 inhabitants, with 1,071 residents in the settlement itself.

Dubravica is a municipality in Zagreb County, Croatia. According to the 2001 census, there are 1,586 inhabitants, absolute majority of which are Croats.

Pušća is a municipality in Zagreb County in Croatia. According to the 2011 census, 2,700 people live in Pušća, 97 percent of which are Croats. The municipality covers an area of 18.20 square kilometers (7.03 sq mi) and forms part of the Zaprešić metropolitan area.

Hajdučka Republika Mijata Tomića, is the private property, spreading over seven hectares between the mountains of Vran and Čvrsnica, and a tourist destination as a self-proclaimed fictional micronation in Bosnia and Herzegovina, in the middle of the Blidinje Nature Park in the northwestern parts of region of Herzegovina.

Šuica is a village in the municipality of Tomislavgrad in western Bosnia and Herzegovina.

Trstenik is a South Slavic place name originating from the word trska which means reed. It may refer to:

Košarkaški klub Gorica, commonly referred to as KK Gorica or simply Gorica, is a men's professional basketball club based in Velika Gorica, Croatia. The club competes in the ABA League Second Division and the Croatian League. 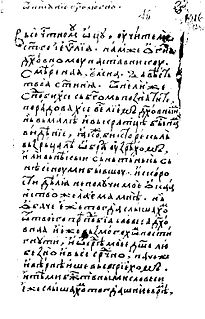 The Gorički zbornik or the Gorica's Almanac or Gorica Miscellany or the Manuscript of Gorica is a Serbian medieval manuscript collection written by Jelena Balšić and monk Nikon of Jerusalem in period between 1441 and 1442 in the church Jelena built on the island Gorica on Skadar Lake. Its name is derived from the name of the church.

Marija Braut was a Croatian photographer and one of the most significant artistic successors of the so-called Zagreb School of Photography.

The Istrian Demarcation or Istrian Perambulation is a legal document on the demarcation of territories between neighbouring municipalities in Istria, currently shared by Croatia, Slovenia, and Italy. More precisely, between the possessions of the Patriarchate of Aquileia, the Count of Gorica and Pazin and the representatives of the Venetian Republic. In addition to the borders that were being agreed upon only in disputed parts of Istria, the Istrian Demarcation also established the payment of fees for the use of forests, vineyards and pastures.