Phyllis Marion Boyd ( née Watt;March 26,1946 –October 11,2022) was a Canadian politician in Ontario. She was a New Democratic member of the Legislative Assembly of Ontario from 1990 to 1999 who represented the riding of London Centre. She served as a member of cabinet in the government of Bob Rae.

Boyd was born in Toronto on March 26,1946,to Bill and Dorothy Watt. [1] [2] She studied at Glendon College,graduating with a Bachelor of Arts in English and history in 1968. From 1968 to 1973,she worked as an assistant to the president of York University. In 1975–76,she helped faculty members of York University win their first union contract. [3] She subsequently worked as an executive director of the London Battered Women's Advocacy Clinic,and served two terms as president of the London Status of Women Action Group. [4] She was widely known as a feminist. [3]

In 1985,Boyd was the NDP candidate in London North in the provincial election of 1985,but finished third against incumbent Liberal Ron Van Horne. [5] She ran in London Centre in the 1987 election,and lost to sitting Premier David Peterson by almost 9,000 votes. [6] She campaigned as a federal New Democrat in the 1988 general election,finished third behind Liberal Joe Fontana and Progressive Conservative Jim Jepson in London East. [7]

Boyd sought a rematch against Peterson in the 1990 provincial election. This time she won,defeating the Premier by more than 8,000 votes. [8] It was almost unheard of for a provincial premier to be defeated in his own riding,and the size of Boyd's victory was all the more surprising. The NDP won the election,and the new Premier,Bob Rae,appointed her as Minister of Education on October 1,1990. [9]

When fellow cabinet member Anne Swarbrick resigned due to health issues,Boyd took over responsibility for Women's Issues on September 11,1991. [10] Boyd launched a high-profile campaign against domestic abuse in the same year. [11] She was transferred to the Ministry of Community and Social Services on October 15,1991,when Zanana Akande resigned due to a conflict of interest. [12]

Boyd was promoted to Attorney General of Ontario on February 3,1993,the first woman to hold that position as well as the first non-lawyer. [13] In this capacity she was responsible for the Equality Rights Statute Amendment Act (Bill 167),that would have provided same-sex couples with rights and obligations mostly equal to those of opposite-sex common law couples. [14] The bill failed on a free vote when twelve NDP members voted with the opposition parties against the bill. [15] The bill's failure was a personal disappointment for Boyd,who had invested considerable effort in promoting its passage. The Progressive Conservative Party,which voted unanimously against Bill 167,formed government after the next election and ultimately passed similar legislation five years later when required by the Supreme Court of Canada's ruling in M v H . [16]

Boyd also approved a highly controversial plea-bargain deal that allowed serial killer Karla Homolka to receive a 12-year prison sentence in return for testimony which led to the conviction of Homolka's then-husband,Paul Bernardo. The deal was criticized in much of the Canadian media,and many questioned Boyd's judgment in the matter. At the time the extent of Homolka's personal involvement in Bernardo's crimes was not known. [17]

Boyd remained as Attorney General until the Rae government was defeated in the 1995 election. She was one of seventeen NDP MPPs to successfully retain their seats in that election,defeating PC candidate Patrick McGuinness by 1,732 votes. [18] Boyd remained a high-profile MPP,serving as the NDP's Health Critic from 1997 to 1999. [2]

The London Centre riding was eliminated by redistribution in 1996. Boyd ran against fellow incumbent Dianne Cunningham of the Progressive Conservative Party in London North Centre,and lost by just over 1,700 votes. [19]

Boyd was appointed chair to the Task Force on the Health Effects of Woman Abuse in 2000. It was convened in response to the problem of domestic violence against women. [25] Later that year the task force produced a report with 29 recommendations. The key conclusion was that doctors should begin screening female patients as young as 12 years old for signs of abuse. [26]

In December 2003, it came to light that religious tribunals had some legal basis under the Arbitration Act. Some argued that this interpretation allowed for Muslim Sharia law to be applied in settling family disputes. [27] In the spring of 2004, the issue flared up even more with some claiming that the use of Sharia law tribunals was infringing on the rights of Muslim women. [28] In the summer of 2004, Premier Dalton McGuinty asked Boyd to investigate the issue. [29]

In December 2004, Boyd released a report that found no evidence of complaints with regards to faith-based arbitration. She concluded that no changes to the act were needed with respect to religious tribunals. She made 46 recommendations for changes to the Arbitration Act primarily dealing with arbitrator training and clarifying the roles and responsibilities of tribunals. [27] In 2005, in response to public opinion, McGuinty ignored Boyd's main conclusion and tabled changes to the act under the Family Statute Law Amendment Act. [30] [31]

While incorporating many of Boyd's recommendations, the act specifically removed any legal status for the arbitration of custodial and marital disputes by religious tribunals. [32] The act mandated that all family law arbitrations in Ontario be conducted only in accordance with Canadian law. [33] Some critics argued that this was a missed opportunity to incorporate aspects of Islamic law into the Canadian judicial system. [34] 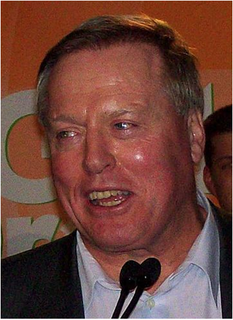 Howard George Hampton is a politician who was a member of Provincial Parliament for the province of Ontario. He served in the Legislative Assembly of Ontario, Canada, from 1987 to 1999 in the electoral district of Rainy River, and from 1999 to 2011 in the redistributed electoral district of Kenora—Rainy River. A member of the Ontario New Democratic Party, he was also the party's leader from 1996 to 2009. Hampton retired from the legislature at the 2011 Ontario provincial election and subsequently joined Fasken Martineau DuMoulin LLP as a member of the law firm's corporate social responsibility and aboriginal affairs groups.

Shelley Dawn Marie Martel is a former politician in Ontario, Canada. She was a New Democratic member of the Legislative Assembly of Ontario from 1987 to 2007. She represented the ridings of Sudbury East and Nickel Belt. She was a cabinet minister in the government of Bob Rae.

Irene R. Mathyssen is a Canadian politician and was a Member of Parliament in the House of Commons of Canada from 2006 until 2019. She was previously a New Democratic Party Member of Provincial Parliament (MPP) in Ontario from 1990 to 1995, and briefly served as a minister in the government of Premier Bob Rae.

Lyn McLeod is a former politician in Ontario, Canada. She served in the Legislative Assembly of Ontario from 1987 to 2003. McLeod was a cabinet minister in the Liberal government of David Peterson from 1987 to 1990, and served as leader of the Ontario Liberal Party from 1992 to 1996.

The 2007 Ontario general election was held on October 10, 2007, to elect members (MPPs) of the 39th Legislative Assembly of the Province of Ontario, Canada. The Liberals under Premier Dalton McGuinty won the election with a majority government, winning 71 out of a possible 107 seats with 42.2% of the popular vote. The election saw the third-lowest voter turnout in Ontario provincial elections, setting a then record for the lowest voter turnout with 52.8% of people who were eligible voted. This broke the previous record of 54.7% in the 1923 election, but would end up being surpassed in the 2011 and 2022 elections. 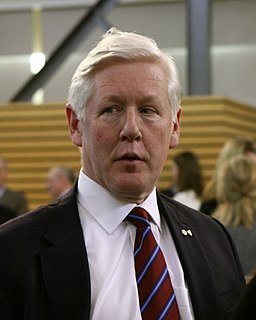 The 1990 Ontario general election was held on September 6, 1990, to elect members of the 35th Legislative Assembly of the province of Ontario, Canada. The governing Ontario Liberal Party led by Premier David Peterson was unexpectedly defeated. Although the Peterson government, and Peterson himself, were very popular, he was accused of opportunism in calling an election just three years into his mandate. In a shocking upset, the New Democratic Party (NDP), led by Bob Rae, won a majority government. This marked the first time the NDP had won government east of Manitoba, and to date the only time the NDP formed the government in Ontario.

Frances Lankin,, is a Canadian senator, former president and CEO of United Way Toronto, and a former Ontario MPP and cabinet minister in the NDP government of Bob Rae between 1990 and 1995. From 2010 to 2012, she co-chaired a government commission review of social assistance in Ontario. From 2009 to 2016, she was a member of the Security Intelligence Review Committee.

Tony Silipo was a Canadian politician. He served in the Legislative Assembly of Ontario from 1990 to 1999 representing the New Democratic Party in the downtown Toronto riding of Dovercourt. In 1999 he was appointed to the Workplace Safety and Insurance appeals tribunal. He died in 2012 from a brain cancer.

Kathleen O'Day Wynne is a Canadian former politician who served as the 25th premier of Ontario and leader of the Ontario Liberal Party from 2013 to 2018. She was elected to the Legislative Assembly in 2003 and sat as the member of provincial parliament (MPP) for Don Valley West until 2022. Wynne is the first female premier of Ontario and the first openly gay premier in Canada.

Tony Ruprecht is a former Canadian politician. His first elected position was as an alderman in the old Toronto City Council, in the late 1970s. He became a member of the Legislative Assembly of Ontario in 1981, and served in premier David Peterson's cabinet as minister without portfolio from 1985 to 1987. Ruprecht represented Toronto's Parkdale and then Davenport constituencies for the Liberal Party of Ontario for 30 years. On July 5, 2011, he announced that he was leaving politics and would not seek re-election in the October 2011 provincial election.

Judy Marsales is a former politician in Ontario, Canada. She was a Liberal member of the Legislative Assembly of Ontario from 2003 to 2007.

Michael Liam Farnan is a former politician in Ontario, Canada. He was a New Democratic Party member of the Legislative Assembly of Ontario from 1987 to 1995, and was a cabinet minister in the government of Bob Rae.

Anne Swarbrick is a former politician in Ontario, Canada. She was a New Democratic Party member of the Legislative Assembly of Ontario from 1990 to 1995 who represented the Toronto riding of Scarborough West. She served as a cabinet minister in the government of Bob Rae.

York South was a provincial riding in Ontario, Canada, that was represented in the Legislative Assembly of Ontario from 1926 to 1999. 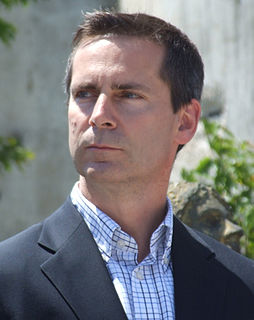 The 2011 Ontario general election was held on October 6, 2011, to elect members of the 40th Legislative Assembly of Ontario. The Ontario Liberal Party was elected to a minority government, with the Progressive Conservative Party of Ontario serving as the Official Opposition and the Ontario New Democratic Party (NDP) serving as a third party. In the final result, Premier McGuinty's party fell one seat short of winning a majority government.

Monique Taylor is a Canadian politician in Ontario, Canada. She is a New Democratic member of the Legislative Assembly of Ontario who represents the riding of Hamilton Mountain. She has been an MPP since 2011.

The Equality Rights Statute Amendment Act,, commonly known as Bill 167, was a proposed law in the Canadian province of Ontario, introduced by the government of Bob Rae in 1994, which would have provided same-sex couples with rights and obligations mostly equal to those of opposite-sex common law couples by amending the definition of "spouse" in 79 provincial statutes. Despite the changes, the bill did not formally confer same-sex marriage rights in the province, as the definition of marriage in Canada is under federal jurisdiction; instead, the bill proposed a status similar to civil unions for same-sex couples, although it was not explicitly labelled as such since the term was not yet in widespread international use.