Donald Wayne Powers was an American football coach. He was the 20th head football coach at The Citadel, The Military College of South Carolina, serving for five seasons, from 1996 to 2000, and compiling a record of 19–36. He also served as an assistant coach, working principally with Linebackers and Defensive Backs, and as a Defensive Coordinator, at Western Carolina, Western Kentucky, and East Carolina.

Dennis Wagner is an American football coach. He was the head football coach at Briar Cliff University from 2017 to 2020. Wagner served as the head football at Wayne State College in Wayne, Nebraska from 1989 to 1996 and at Western Carolina University from 2008 to 2011. He took over as the twelfth head coach of the Western Carolina Catamounts football program on December 31, 2007 and resigned on November 13, 2011.

The Western Carolina Catamounts football program represents Western Carolina University. The team competes in the NCAA Division I Football Championship Subdivision (FCS) and are members of the Southern Conference. Since the school's first football team was fielded in 1931, the Catamounts have a record of 341-502-23, have made two postseason appearances, and have played in one national championship game.

John Becker is an American college basketball coach, currently the head coach of the Vermont Catamounts of the America East Conference. He replaced Mike Lonergan, who left to become the coach at George Washington University. 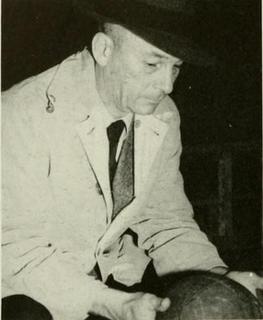 Anquell McCollum is an American high school basketball coach who is also and former professional player and college coach. McCollum played in numerous countries during a four-year career between 1996 and 2000 after a highly successful collegiate career at Western Carolina University. He served as an assistant coach at Western Carolina from 2004 to 2018 before taking over as head coach Freedom Christian Academy in Fayetteville, North Carolina.

Donald S. White was an American college basketball player and coach. Raised in Lebanon, Indiana, White was a standout basketball player at Lebanon High School and led them to consecutive state championships in 1917 and 1918. He attended Purdue University and played for their basketball and baseball teams. As a senior in 1920–21, White led the Western Conference in scoring and his Boilermakers to a conference championship. He was named first-team all-Western Conference and was also declared a consensus All-American by the Helms Athletic Foundation.

The Washburn Ichabods men's basketball team represents Washburn University in Topeka, Kansas, in the NCAA Division II men's basketball competition. The team is currently coached by Brett Ballard, who is in his first year at the helm. Ballard replaced Bob Chipman, who retired after the 2016–17 season. The Ichabods currently compete in the Mid-America Intercollegiate Athletics Association (MIAA). The basketball team plays its home games in Lee Arena on campus.

Ronald McHenry is an American college women's basketball coach at Washburn University. During his 18 seasons at Washburn, he has led the Ichabods to one national championship, seven conference regular season and tournament championships, and twelve NCAA tournament appearances. Prior to his current post, McHenry served as an assistant coach at a local high school, assistant and interim head coach for the Topeka Sizzlers for one season, assistant coach for the Washburn men's basketball program, as well as the men's golf coach at Washburn for eight seasons.

Bobby Pate is a former American football player and coach. He played college football at South Georgia State College under then-head coach Bobby Bowden before finishing his career at Presbyterian College in Clinton, South Carolina. He was selected by the San Francisco 49ers in the 1960 NFL Draft, as well as by the Boston Patriots in the 1960 American Football League draft.

The 2019–20 Western Carolina Catamounts men's basketball team represented Western Carolina University in the 2019–20 NCAA Division I men's basketball season. The Catamounts, led by second-year head coach Mark Prosser, played their home games at the Ramsey Center in Cullowhee, North Carolina, as members of the Southern Conference. They finished the season 19–12, 10–8 in Southern Conference play to finish in a tie for fifth place. They defeated Mercer in the quarterfinals of the Southern Conference Tournament before losing in the semifinals to East Tennessee State.