Satrapi was born in Rasht, Iran. [1] She grew up in Tehran in a middle-class Iranian family. [4] Both her parents were politically active and supported Marxist causes against the monarchy of the last Shah. When the Iranian Revolution took place in 1979, they were oppressed by the Muslim fundamentalists who took power. [4]

During her youth, Marjane was exposed to the growing brutalities of the various regimes. Many of her family friends were persecuted, arrested, and even murdered. She found a hero in her paternal uncle, Anoosh, who had been a political prisoner and lived in exile in the Soviet Union for a time. Young Marjane greatly admired her uncle, and he in turn doted on her, treating her more as a daughter than a niece. Once back in Iran, Anoosh was arrested again and sentenced to death. Anoosh was only allowed one visitor the night before his execution, and he requested Marjane. His body was buried in an unmarked grave in the prison.

Although her parents encouraged Marjane to be strong-willed and defend her rights, they grew concerned for Marjane's safety. Barely in her teens by this time, she was skirting trouble with police for disregarding modesty codes and buying music banned by the regime.

They arranged for her to live with a family friend to study abroad, and in 1983 she arrived in Vienna, Austria, to attend the Lycée Français de Vienne. [5] She stayed in Vienna through her high school years, often moving from one residence to another as situations changed, and sometimes stayed at friends' homes. Eventually, she was homeless and lived on the streets for three months, until she was hospitalized for an almost deadly bout of pneumonia. Upon recovery, she returned to Iran. She studied visual communication, eventually obtaining a master's degree from Islamic Azad University in Tehran. [6]

Satrapi married Reza, a veteran of the Iran–Iraq War, when she was 21, whom she later divorced. She then moved to Strasbourg, France. Her parents told her that Iran was no longer the place for her, and encouraged her to stay in Europe permanently.

Satrapi is married to Mattias Ripa, a Swedish national. They live in Paris. [4] Apart from her native language, Persian, she speaks French, English, Swedish, German, and Italian. [7]

Satrapi became famous worldwide because of her critically acclaimed autobiographical graphic novels, originally published in French in four parts in 2000–2003 and in English translation in two parts in 2003 and 2004, respectively, as Persepolis and Persepolis 2 , which describe her childhood in Iran and her adolescence in Europe. Persepolis won the Angoulême Coup de Coeur Award at the Angoulême International Comics Festival. In 2013, Chicago schools were ordered by the district to remove Persepolis from classrooms because of the work's graphic language and violence. This incited protests and controversy. [8] Her later publication, Embroideries (Broderies), was also nominated for the Angoulême Album of the Year award in 2003, an award that her novel Chicken with Plums (Poulet aux prunes) won. [9] [10] She has also contributed to the Op-Ed section of The New York Times . [11]

Satrapi prefers the term "comic books" to "graphic novels." [13] "People are so afraid to say the word 'comic'," she told the Guardian newspaper in 2011. "It makes you think of a grown man with pimples, a ponytail and a big belly. Change it to 'graphic novel' and that disappears. No: it's all comics." [14]

Persepolis was adapted into an animated film of the same name. It debuted at the 2007 Cannes Film Festival in May 2007 and shared a Special Jury Prize with Carlos Reygadas's Silent Light (Luz silenciosa). [15] Co-written and co-directed by Satrapi and director Vincent Paronnaud, the French-language picture stars the voices of Chiara Mastroianni, Catherine Deneuve, Danielle Darrieux, and Simon Abkarian. The English version, starring the voices of Gena Rowlands, Sean Penn, and Iggy Pop, was nominated for an Academy Award for Best Animated Feature in January 2008. [16] Satrapi was the first woman to be nominated for the award. However, the Iranian government denounced the film and got it dropped from the Bangkok International Film Festival. [17] Otherwise, Persepolis was a very successful film both commercially (with over a million admissions in France alone) as well as critically, winning Best First Film at the César Awards 2008. The film reflects many tendencies of first-time filmmaking in France (which makes up around 40% of all French cinema each year), notably in its focus on very intimate rites of passage, and quite ambivalently recounted coming-of-age moments. [18]

Satrapi and Paronnaud continued their successful collaboration with a second film, a live-action adaptation of Chicken with Plums, released in late 2011. [19] [20] In 2012, Satrapi directed and acted in the comedy crime film Gang of the Jotas , from her own screenplay. [21] [22]

In 2014 Satrapi directed the comedy-horror film The Voices , from a screenplay by Michael R. Perry. [23]

Following the Iranian elections in June 2009, Satrapi and Iranian filmmaker Mohsen Makhmalbaf appeared before Green Party members in the European Parliament to present a document allegedly received from a member of the Iranian electoral commission claiming that the reform candidate, Mir Hossein Mousavi, had actually won the election, and that the conservative incumbent Mahmoud Ahmedinejad had received only 12% of the vote. [25] 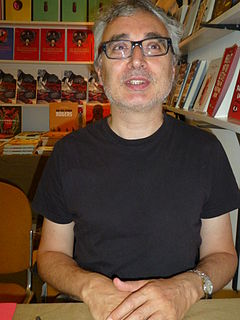 Pierre-François "David" Beauchard, who uses the pen name David B., is a French comic book artist and writer, and one of the founders of L'Association.

Persepolis is an autobiographical series of bande dessinées by Marjane Satrapi that depicts her childhood up to her early adult years in Iran and Austria during and after the Islamic Revolution. The title Persepolis is a reference to the ancient capital of the Persian Empire. Originally published in French, the graphic memoir has been translated to many other languages, including English, Spanish, Catalan, Portuguese, Italian, Greek, Swedish, Finnish, Georgian, Chinese and others. As of 2018, it has sold more than 2 million copies worldwide. Persepolis was written in 2000 and Persepolis 2 was written in 2004.

L'Association is a French publishing house which publishes comic books. It was founded in May 1990 by Jean-Christophe Menu, Lewis Trondheim, David B., Mattt Konture, Patrice Killoffer, Stanislas, and Mokeït. As of 2012, of the original founding members, only Konture continues to be affiliated with the company.

Chicken with Plums is a 2004 graphic novel by Iranian author Marjane Satrapi.

Ali Ashraf Darvishian was a Kurdish story writer and scholar. After finishing teacher-training college, he would teach at the poverty-stricken villages of Gilan-e-Gharb and Shah Abad. This atmosphere is featured in most of his stories. His own life situation, as well as the experiences that he had from his teaching in those poor areas, was the inspiration for his literary works and also made him a critic of the political and social situation of Iran. Later, he moved to Tehran and continued his studies in Persian literature.

Persepolis is a 2007 animated biographical drama film based upon the Marjane Satrapi autobiographical graphic novel of the same name. It was written and directed by Satrapi in collaboration with Vincent Paronnaud. The story follows a young girl as she comes of age against the backdrop of the Iranian Revolution. The title references the historical city of Persepolis. The film was an international co-production made by companies in France and Iran. It premiered at the 2007 Cannes Film Festival, where it co-won the Jury Prize, alongside Silent Light. In her acceptance speech, Satrapi said "Although this film is universal, I wish to dedicate the prize to all Iranians." It was released in France and Belgium on 27 June 2007, earning universal praise by critics. It was nominated for the Academy Award for Best Animated Feature, but lost to Ratatouille.

Persepolis is an ancient capital in what is now Iran.

Vincent Paronnaud, a.k.a. Winshluss, is a French comics artist and filmmaker. 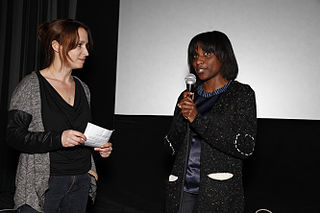 Some sources opposed to the Iranian government allege that during the Iran–Iraq War (1980–88), Plastic Keys to Paradise were distributed to young Iranian military volunteers by the Islamic Republic of Iran leadership. It was reported in the Western media that golden-colored, plastic "paradise keys" were widely issued, each one symbolizing the certain entry into "paradise" for volunteers who were killed.

Zahra's Paradise is a webcomic and graphic novel by Amir Soltani and Khalil set in modern Iran. It has been described as a political webcomic dealing with real-time events. Its story follows a mother searching for her son, who disappeared around the time of the Iran's 2009 elections. Serialized online beginning in early 2010, Zahra's Paradise was published in hardcover format in 2011, and has received numerous positive reviews in mainstream press and blogs.

The Angoulême International Comics Festival is the second largest comics festival in Europe after the Lucca Comics & Games in Italy, and the third biggest in the world after Lucca Comics & Games and the Comiket of Japan. It has occurred every year since 1974 in Angoulême, France, in January.

Chicken with Plums is a 2011 internationally co-produced drama film directed by Marjane Satrapi and Vincent Paronnaud. It is based on the graphic novel of the same name. The film premiered in competition at the 68th Venice International Film Festival on 3 September 2011. It was released in France on 26 October through Le Pacte.

Muslim women filmmakers represent a largely important, but marginalized group of media makers and visual artists coming from countries where the dominant religion is Islam. Some of these nations include Iran, Afghanistan, Indonesia, Pakistan, Egypt, Mali, Palestine and Malaysia.