Stanford Mark Juddery (8 March 1971 –13 January 2015) was an Australian freelance journalist, author, humorist and columnist for The Canberra Times . His work also appeared in such newspapers as The Australian and The Sydney Morning Herald , as well as a range of magazines including The Bulletin , Empire , Inside Sport , Mad Magazine and Griffith Review . He also wrote comedy sketches for radio and television, as well as several short comedy plays, which he directed and performed worldwide. [1]

A movie critic and writer for several years, as well as a publicist for the National Film and Sound Archive, Juddery wrote an e-book guide to movie reviewing for Fabjob Books in 2003. Along with movies, popular culture and humor, much of his writing has revealed an interest in Eastern spirituality. At the age of 19, he studied under meditation teacher Sri Chinmoy and consistently meditated. [2]

As well as hundreds of articles, Juddery wrote the books 1975 – Australia's Greatest Year (John Wiley and Sons, 2005), Busted! The 50 Most Overrated Things in History (Random House, 2008) and Best. Times. Ever (Hardie Grant Books, 2014), all for the Australian market. [3] In 2010, Busted! was re-published for the US market by Perigree Books (a division of Penguin) in New York, substantially revised and rewritten by the author, with the new title Overrated: The 50 Most Overhyped Things in History. Several chapters were replaced, some of them because they were on topics unknown to American readers (e.g. Gallipoli). [4]

Juddery lived in Canberra, Australia, where he wrote a popular weekly column for The Canberra Times from 2007. [5] Early in 2014, he was diagnosed with cancer, just as his book Best. Times. Ever was due to be released. "Not only doesn't my cancer make sense, but it isn't even fair," he wrote. "In that way, it reminds me of everyone over the years who has hurt me, everyone who has threatened me, everyone who has tried to control me, everyone who has made me feel scared. I have every intention of fighting those bastards. I have every intention of beating them." [6] He died of cancer on 13 January 2015, aged 43. [2] 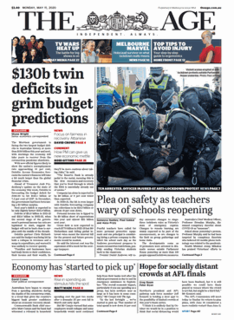 The Age is a daily newspaper in Melbourne, Victoria, Australia, that has been published since 1854. Owned and published by Nine Entertainment Co., The Age primarily serves Victoria, but copies also sell in Tasmania, the Australian Capital Territory and border regions of South Australia and southern New South Wales. It is delivered both in print and digital formats. The newspaper shares some articles with its sister newspaper The Sydney Morning Herald. The paper has variously been known for its investigative reporting, with its journalists having won dozens of Walkley Awards, Australia's most prestigious journalism prize.

Ian McFarlane is an Australian music journalist, music historian and author, whose best known publication is the Encyclopedia of Australian Rock and Pop (1999), which was updated for a second edition in 2017.

Roland John Perry OAM is an Australian author best known for his books on history, especially Australia in the two world wars. His Monash: The Outsider Who Won The War, won the Fellowship of Australian Writers' 'Melbourne University Publishing Award' in 2004. The judges described it as 'a model of the biographer's art.' In the Queen's Birthday Honours of 2011, Perry was awarded the Medal of the Order of Australia 'for services to literature as an author.' In October 2011, Monash University awarded Perry a Fellowship for 'high achievement as a writer, author, film producer and journalist.' His sports books include biographies of Sir Donald Bradman, Steve Waugh, Keith Miller and Shane Warne. Perry has written on espionage, specialising in the British Cambridge Five ring of Russian agents. He has also published three works of fiction and produced more than 20 documentary films. Perry has been a member of the National Archives of Australia Advisory Council since 2006. In late 2012 Perry accepted an adjunct appointment at Monash University as a Professor, with the title ‘Writer-in-Residence’ in the University's Arts Faculty.

James Matthew Valentine is an Australian journalist, musician, and radio and television presenter. As a saxophonist he was a member of Jo Jo Zep (1982), Models (1984–87) and Absent Friends (1989–90). 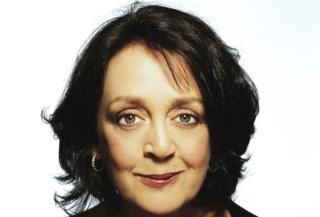 John Patrick O'Grady, was an Australian writer. His works include the comic novel They're a Weird Mob (1957) using the pen name Nino Culotta and the poem The Integrated Adjective, sometimes known as Tumba-bloody-rumba. Born to John Edward O'Grady and Margaret Gleeson.

Toby Creswell is an Australian music journalist and pop-culture writer. He was editor of Rolling Stone (Australia) and a founding editor of Juice. In 1986 he co-wrote, with Martin Fabinyi, his first book Too Much Ain't Enough a biography of pub rocker and former Cold Chisel vocalist Jimmy Barnes. Creswell has also written The Real Thing: Adventures in Australian Rock & Roll, 1957-Now in 1999 and 1001 Australians You Should Know in 2006. The latter was written with his domestic partner, fellow writer and journalist, Samantha Trenoweth.

Marc Alexander Hunter was a New Zealand rock and pop singer, songwriter and record producer. He was the lead vocalist of Dragon, a band formed by his older brother, Todd Hunter, in Auckland in January 1972. They relocated to Sydney in May 1975. He was also a member of the Party Boys in 1985. For his solo career he issued five studio albums, Fiji Bitter, Big City Talk, Communication, Night and Day and Talk to Strangers. During the 1970s Hunter developed heroin and alcohol addictions and was incarcerated at Mt Eden Prison in Auckland in 1978. He was recklessly outspoken and volatile on-stage. In November 1978 during the band's American tour, supporting Johnny Winter, they performed in Dallas, Texas, where "he made some general stage observations about redneck buddies, illegal oral sex and utility trucks" and called the audience members, "faggots". Upon his return to Australia, in February 1979, he was fired from the group by his brother, Todd.

Sam de Brito was a Sydney-born author and writer for The Sydney Morning Herald and The Age who wrote the blog All Men Are Liars.

Gavin Merrick Long was an Australian journalist and military historian. He was the general editor of the official history series Australia in the War of 1939–1945 and the author of three of its 22 volumes.

David McKay was an Australian journalist and prominent motoring identity. 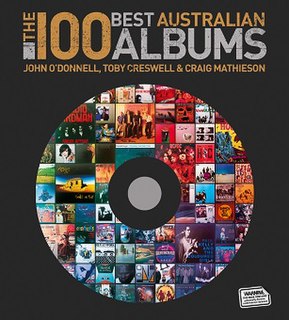 The 100 Best Australian Albums is a compendium of rock and pop albums of the past 50 years as compiled by music journalists Toby Creswell, Craig Mathieson and John O'Donnell. The book was published on 25 October 2010 by Hardie Grant Books. Sony Music has released a five CD compilation to support the book.

Benjamin Law is an Australian author and journalist. He is best known for his books The Family Law, a family memoir published in 2010, and Gaysia: Adventures in the Queer East, a journalistic exploration of LGBT life in Asia.

Gordon Albert Jockel was an Australian public servant and diplomat.

Bruce Juddery was an Australian journalist. He wrote primarily for The Canberra Times.

John Mayo Farquharson was an Australian journalist. He worked for 22 years with The Canberra Times, from 1966 to 1988.