Mark Lenard (born Leonard Rosenson, October 15, 1924 – November 22, 1996) was an American actor, primarily in television. His most famous role was as Sarek, father of the popular character Spock, in the science fiction Star Trek franchise, in both the original and animated series, as well as three films and two episodes of Star Trek: The Next Generation . He also played a Klingon in Star Trek The Motion Picture , and a Romulan in an episode of Star Trek: The Original Series .

Lenard was born in Chicago, Illinois, the son of a Russian Jewish immigrant, Abraham, and his wife, Bessie, but was raised in the small town of South Haven, Michigan, where his family owned a tourist resort. [1] [2] He joined the United States Army in 1943 and trained to be a paratrooper during World War II but did not see combat and was discharged in 1946 as a technical sergeant. [3]

He got his start on stage while in the army. After earning a master's degree in theater and speech from the University of Michigan, he became known in New York City for serious drama, including Ibsen, Shaw, and Chekov. His first notable role was that of Conrad in John Gielgud's production of Much Ado About Nothing . In the mid-1960s, he moved his family to Los Angeles, where he played one of the Three Wise Men in the biblical epic The Greatest Story Ever Told (1965). [3]

Lenard is best known for his appearances in the Star Trek franchise, particularly in the role of Sarek, the father of Spock (Leonard Nimoy). However, his first Star Trek appearance was in the first season of Star Trek: The Original Series , playing the first Romulan ever seen in the series, in the episode "Balance of Terror" (1966). He originated the character of Sarek in the second-season episode "Journey to Babel" (1967), and provided the voice of Sarek in the Star Trek: The Animated Series episode "Yesteryear" (1973). He later played an ill-fated Klingon Captain in Star Trek: The Motion Picture (1979), which gave him the distinction of being the first actor to play a Romulan, a Vulcan, and a Klingon in Star Trek. He reprised the role of Sarek in three of the Star Trek feature films: Star Trek III: The Search for Spock (1984), Star Trek IV: The Voyage Home (1986), and Star Trek VI: The Undiscovered Country (1991), and provided the voice of young Sarek in a brief flashback sequence in Star Trek V: The Final Frontier (1989). Additionally, he appeared as the elderly Sarek in the third-season Star Trek: The Next Generation episode "Sarek" (1990) and the fifth-season episode "Unification: Part 1" (1991).

Lenard's work outside the Star Trek franchise included playing the prosecutor in Fort Grant in the Clint Eastwood film Hang 'Em High (1968). He also played the character Aaron Stempel in the television series Here Come the Brides , and the hostile gorilla Urko in the television series Planet of the Apes . He made a guest appearance on Little House on the Prairie in the episode "Journey in the Spring, Part I", playing Peter Ingalls, older brother of Charles Ingalls. He had roles in Gunsmoke several times, including in the episode "Nowhere to Run" (1968). Lenard guest-starred in several episodes of the original Mission: Impossible , including one with Leonard Nimoy, and in a two-part episode of Buck Rogers in the 25th Century .

Lenard played a lead role in the film Noon Sunday, filmed on Guam with costars Keye Luke, TV series star John Russell from Lawman , and character actor Stacy Harris. In The Radicals (1990), which recounted the beginnings of the Swiss Anabaptist movement in the 1520s, he played a composite historical character, Eberhard Hoffman, a Catholic bishop who serves as prosecutor in the trial of his former abbot Michael Sattler. [4] In 1993, Lenard and fellow Star Trek actor Walter Koenig toured in a production of The Boys in Autumn. Lenard played a late middle-aged Huck Finn who re-encounters his childhood friend Tom Sawyer after a lifetime apart. Koenig played Sawyer.

Lenard died of multiple myeloma in New York City in 1996 at the age of 72.

Star Trek is an American science-fiction television series created by Gene Roddenberry that follows the adventures of the starship USS Enterprise (NCC-1701) and its crew. It later acquired the retronym of Star Trek: The Original Series (TOS) to distinguish the show within the media franchise that it began.

Vulcans are a fictional extraterrestrial humanoid species in the Star Trek universe and media franchise. In the various Star Trek television series and movies, they are noted for their attempt to live by logic and reason with as little interference from emotion as possible. Known for their pronounced eyebrows and pointed ears, they originate from the fictional planet Vulcan. In the Star Trek universe, they were the first extraterrestrial species to make contact with humans. 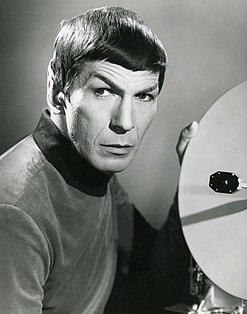 Spock is a fictional character in the Star Trek media franchise. Spock, who was originally played by Leonard Nimoy, first appeared in the original Star Trek series serving aboard the starship Enterprise as science officer and first officer, and later as commanding officer of two iterations of the vessel. Spock's mixed human-Vulcan heritage serves as an important plot element in many of the character's appearances. Along with Captain James T. Kirk and Dr. Leonard "Bones" McCoy, he is one of the three central characters in the original Star Trek series and its films.

Sarek is a fictional character in the Star Trek media franchise. He is a Vulcan astrophysicist, the Vulcan ambassador to the United Federation of Planets, and father of Spock. The character was originally played by Mark Lenard in the episode "Journey to Babel" in 1967. Lenard later voiced Sarek in the animated series, and appeared in Star Trek films and the series Star Trek: The Next Generation. 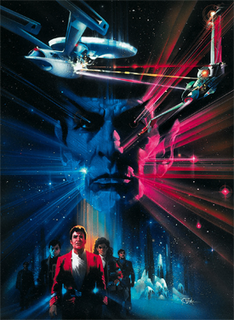 Star Trek III: The Search for Spock is a 1984 American science fiction film, written and produced by Harve Bennett, directed by Leonard Nimoy, and based on the television series Star Trek. It is the third film in the Star Trek film series, and is the second part of a three-film story arc that begins with Star Trek II: The Wrath of Khan (1982) and concludes with Star Trek IV: The Voyage Home (1986). After the death of Spock (Nimoy), the crew of the USS Enterprise returns to Earth. When James T. Kirk learns that Spock's spirit, or katra, is held in the mind of Dr. Leonard "Bones" McCoy, Kirk and company steal the Enterprise to return Spock's body to his homeworld. The crew must also contend with hostile Klingons led by Kruge who are bent on stealing the secrets of a powerful terraforming device.

The Kobayashi Maru is a training exercise in the fictional Star Trek universe designed to test the character of Starfleet Academy cadets in a no-win scenario. The Kobayashi Maru test was first depicted in the opening scene of the film Star Trek II: The Wrath of Khan and also appears in the 2009 film Star Trek. Screenwriter Jack B. Sowards is credited with inventing the test. The test's name is occasionally used among Star Trek fans or those familiar with the series to describe a no-win scenario, a test of one's character or a solution that involves redefining the problem and managing an insurmountable scenario gracefully. 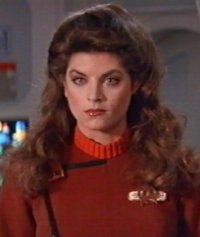 Saavik is a fictional character in the Star Trek universe. She first appeared in the film Star Trek II: The Wrath of Khan (1982) played by Kirstie Alley. Robin Curtis took over the role for Star Trek III: The Search for Spock (1984) and Star Trek IV: The Voyage Home (1986).

"Balance of Terror" is the fourteenth episode of the first season of the American science fiction television series, Star Trek. Written by Paul Schneider and directed by Vincent McEveety, it first aired on December 15, 1966.

"Errand of Mercy" is the twenty-sixth episode of the first season of the American science fiction television series Star Trek. Written by Gene L. Coon and directed by John Newland, it was first broadcast on March 23, 1967. It was the first episode in which the Klingons appeared. 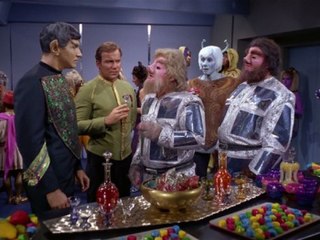 "Journey to Babel" is the tenth episode of the second season of the American science fiction television series Star Trek. Written by D. C. Fontana and directed by Joseph Pevney, it was first broadcast on November 17, 1967. 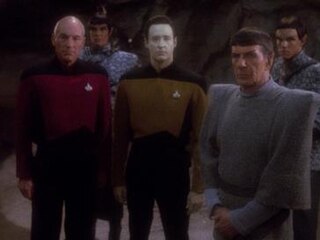 "Unification" is a two-part episode of the syndicated American science fiction television series Star Trek: The Next Generation, from the fifth season, which features Leonard Nimoy as Spock. It earned a 15.4 household Nielsen rating, drawing over 25 million viewers, making it one of the most watched episodes in all seven seasons of The Next Generation's run.

"The Enterprise Incident" is the second episode of the third season of the American science fiction television series Star Trek. Written by D. C. Fontana and directed by John Meredyth Lucas, it was first broadcast September 27, 1968.

Here Come the Brides is an American comedy Western series from Screen Gems that aired on the ABC television network from September 25, 1968 to April 3, 1970. The series was loosely based upon the Mercer Girls project, Asa Mercer's efforts to bring civilization to old Seattle in the 1860s by importing marriageable women from the east coast cities of the United States, where the ravages of the American Civil War left those towns short of men.

"Sarek" is the 23rd episode of the third season of the American science fiction television series Star Trek: The Next Generation, and the 71st episode overall. It was originally released on May 14, 1990, in broadcast syndication. The story for the episode was created by Marc Cushman and Jake Jacobs, with the teleplay written by Peter S. Beagle. "Sarek" was directed by Les Landau. 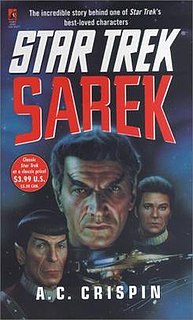 Sarek is a novel by A. C. Crispin, set in the fictional Star Trek universe. It is set shortly after the motion picture Star Trek VI: The Undiscovered Country. Ambassador Sarek of Vulcan discovers evidence of a complicated plot to cripple the United Federation of Planets; he must work to find out who is behind it while also coming to terms with the death of his human wife, Amanda Grayson. A secondary storyline follows the adventures of Peter Kirk, nephew of James T. Kirk, who inadvertently becomes caught up in the enemy's schemes.

Ishmael is a novel by Barbara Hambly, set in the Star Trek fictional universe.

Several characters within the Star Trek franchise, primary and secondary, often made crossover appearances between one live-action series and another. This included appearances of established characters on premiere episodes of new series, a few long-term transfers from one series to another, and even crossovers between Trek films and television. A few crossover appearances, such as that of Spock on The Next Generation and the time-travel of the crew of Deep Space Nine to the era of The Original Series were especially lauded by both fans and critics.

The development of Spock, a fictional character first introduced in the American science fiction television series Star Trek: The Original Series, began prior to the start of the series. The first known mention of Spock was in a discussion between Gene Roddenberry and Gary Lockwood, where the latter suggested Leonard Nimoy for the role. Roddenberry agreed with the suggestion, and Nimoy became the first choice actor for the part. However, Roddenberry was required to audition other actors for the role. It was offered to both DeForest Kelley and Martin Landau before Nimoy. Nimoy disliked the prosthetic ears he was required to wear, and there were concerns from the studio that they made him appear satanic. Roddenberry fought to keep the character in the second pilot, "Where No Man Has Gone Before" after the rest of the main cast was dropped from the initial pilot, "The Cage".