Markaz-i Bihsūd District (Persian : ولسوالی مرکز بهسود‎) is one of the districts of Maidan Wardak Province in Afghanistan. It is located less than an hour-drive west of Kabul and south Bamyan. The main town in the district is Behsud. The district has an estimated population of 134,852 people, [2] majority of which are ethnic Hazaras.

The Markazi Behsud is the largest district of Maidan Wardak Province with a number of villages. Most residents of the district are farmers and involved in agriculture. [3] The chief of the district is Abdul Rahman Tawfiq. [4]

The Hesa Awal Behsood District sits to the northeast of this district. Both are strongholds of Hazara militia forces who are engaged in a guerrilla warfare with the Taliban and the Afghan National Security Forces (ANSF). [5] [6] [7] [8] [9] One of these groups are led by Abdul Ghani Alipur (also known as Commander Shamshir), [10] [11] who is currently wanted by the Afghan government. His followers have used a rocket-propelled grenade to shoot down an Mil Mi-17 of the Afghan Air Force on March 18, 2021, [12] which was transporting several members of the Afghan National Police. [13] [14] [15] [16] [17] [18] All nine ANSF members in the Mi-17 helicopter were killed, including the Afghan pilots. [19] [20] 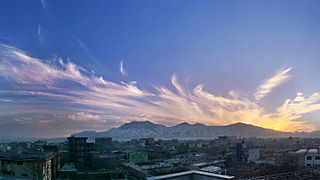 Dashte Barchi is a settlement located in western Kabul, Afghanistan. Previously barren and agricultural, Dashte Barchi became populated in the early 2000s by newcomers from the provinces, mostly ethnic Hazaras from Maidan Wardak, Ghazni and Parwan, and some Kochi Pashtuns. It is mostly informally-developed. Over 95% of population of Dashte Barchi are Hazara. 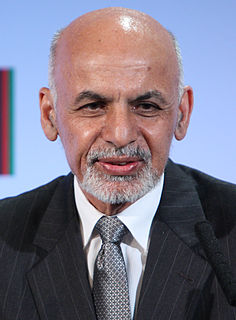 Presidential elections were held in Afghanistan on 5 April 2014, with a second round held on 14 June. Incumbent President Hamid Karzai was not eligible to run due to term limits. The registration period for presidential nominations was open from 16 September 2013 until 6 October 2013. A total of 27 candidates were confirmed to be running for office. However, on 22 October Afghanistan's Independent Election Commission disqualified 16 of the candidates, leaving only 11 in the race. By April 2014 three candidates gave up the race and decided to support some of the eight remaining candidates. Opinion polls showed Abdullah Abdullah and Ashraf Ghani as the front-runners and indeed the results of the first round of the election had Abdullah in the lead and Ghani behind him. The second set of results came after the run-off on 14 June, two months after the first round. Preliminary results were expected on 2 July and the final result on 22 July. However, widespread accusations of fraud delayed these results. As a result, John Kerry, then United States Secretary of State, mediated the negotiations between the two final candidates, Ghani and Abdullah. After a series of negotiations and talks between Ghani, Abdullah and Kerry, the two candidates agreed to sign an Agreement to form a National Unity Government based on 50–50 power sharing. As a result of that political agreement, a separate position was created for Abdullah as Chief Executive. The National Unity Government's term will run out after the next Afghan presidential election is held in September 2019.

Ghulam Husain Naseri is an ethnic Hazara politician in Afghanistan. He is the representative of the people of Maidan Wardak during the 16th term of Afghanistan Parliament.