Market Bosworth is a small market town and civil parish in western Leicestershire, England. At the 2001 Census, it had a population of 1,906, [1] increasing to 2,097 at the 2011 census. [2] It is most famously near to the site of the decisive final battle of the Wars of the Roses. [3]

Although the town is in Leicestershire, its postal address is Nuneaton, Warwickshire and postal area code CV13.

The town's historic cattle market closed in 1996. [4] Building work here and at other sites has revealed evidence of a settlement on the hill since the Bronze Age. [5] Remains of a Roman villa have been found on the east side of Barton Road. Bosworth as an Anglo-Saxon village dates from the 8th century.

Before the Norman Conquest of 1066, there were two manors at Bosworth one belonging to an Anglo-Saxon knight named Fernot, and some sokemen. [6] Following the Norman conquest, as recorded in the Domesday Book of 1086, both the Anglo-Saxon manors and the village were part of the lands awarded by William the Conqueror to the Count of Meulan from Normandy, Robert de Beaumont, 1st Earl of Leicester. Subsequently, the village passed by marriage dowry to the English branching of the French House of Harcourt.

King Edward I gave a royal charter to Sir William Harcourt allowing a market to be held every Wednesday. The village took the name Market Bosworth from 12 May 1285, and on this day became a "town" by common definition. The two oldest buildings in Bosworth, St. Peter's Church and the Red Lion pub, were built during the 14th century.

The Battle of Bosworth took place to south of the town in 1485 as the final battle in the Wars of the Roses between the House of Lancaster and the House of York, which resulted in the death of King Richard III. Following the discovery of the remains of Richard III in Leicester during 2012, on Sunday 22 March 2015 the king's funeral cortège passed through the town on its way to Leicester Cathedral for his reburial. This event is now commemorated with a floor plaque in front of the war memorial in the town square.

In 1509 the manor passed from the Harcourts to the Grey family.

In 1554, following the beheading of Lady Jane Grey, the manor of Bosworth was among lands confiscated in the name of Mary I of England and her husband Philip II of Spain. They awarded the manor to the Catholic nobleman Edward Hastings. In 1567, his heirs sold it to Sir Wolstan Dixie, Lord Mayor of London, who never lived in Bosworth. The first Dixie to live in Bosworth was his grand-nephew, Sir Wolstan Dixie of Appleby Magna, who moved to the town in 1608. He started construction of a manor house and park, as well as establishing the free Dixie Grammar School. The modern hall, Bosworth Hall, was the work of Sir Beaumont Dixie, 2nd Baronet (1629–1692).

In 1885 the 11th Baronet 'Beau' Dixie was forced to auction Bosworth Hall to pay his gambling debts. It was bought by Lady Agnes Tollemache, whose husband Charles Tollemache Scott enlarged the estate, planted woodlands and rebuilt the lodges and farms. [7] Lady Agnes' daughter sold the estate in 1913.

The War Memorial in the town square honours 19 local men who died in the First World War, and 11 men dead in the Second World War. [8]

This includes people born, educated, or having lived in Market Bosworth.

The Town entered into the Britain in Bloom competition on the 500th anniversary of the battle in 1985. Floral decorations were displayed around the town. The success of this entry caused the formation of the "Bosworth in Bloom Committee", to prepare for more displays. In 2012 – the Town reached the national finals for England and won a Gold Award. [9]

The town has two football teams, AFC Market Bosworth (playing mostly on Saturdays) and Market Bosworth FC (mostly Sundays). Both have teams across various age groups from under 5s to over 35s. The triathlon club and cricket club are based at the same ground as Market Bosworth FC, the sports and social club. [10] [11] [12]

The town also has a rugby club and a tennis club.

Facilities and places of interest

The facilities within Market Bosworth are very good for a town of its size.

The market square is in the centre of the town, surrounded by various shops, including craft and antique shops, small cafes, a traditional green grocery store, co-op, newsagents, an HSBC bank and estate agents. A regular market takes place on Wednesdays and monthly Sunday Farmers’ Markets. The town also has a doctor's surgery, dentist and library.

The town centre boasts many characterful, historic buildings. In the corner of the Market Place are two cottages, known as the Rose and Thistle Cottages, named to confirm the link of the Dixie family to England and Scotland. The properties date back to 1640 (engraved in the frame at first floor) and the original Crook A frame can still be seen in Thistle Cottage which is now a tea room and bistro. Rose Cottage remains as a private residence. The cottages were extensively rebuilt and re-faced with brickwork in 1807 (evidenced by date stamped brick on Thistle Cottage facade) to modernise the appearance in keeping with other properties around the Market Place.

There are three pubs, The Black Horse, [14] The Dixie Arms Hotel [15] and the Red Lion, [16] which is one of Bosworth's oldest buildings. Earlier pubs included King William IV, now converted into private residences; Inn on the Park, demolished to accommodate the Sycamore Way housing estate, and the Wheatsheaf, now a small shopping courtyard.

Market Bosworth Country Park [17] and Bosworth Water Park [18] offer outside recreation. The site of the Battle of Bosworth [19] is a few miles south of the town. Market Bosworth was previously served by the Ashby and Nuneaton Joint Railway which is now the heritage Battlefield Line Railway and runs at weekends from Shackerstone, via Market Bosworth station to Shenton. The Ashby Canal runs adjacent to the railway and is served by Bosworth Marina with moorings for 150 boats.

There are hourly bus services to Leicester, Hinckley and Coalville. [20]

Barwell is a civil parish and large village in Leicestershire, England, with a population of around 8,750 people, Increasing to 9,022 at the 2011 census, the name literally translates as "Stream of the Boar" and is said to originate from a boar that used to drink from the well near a brook in Barwell. It was originally known as Borewell, but later became "Barwell", the name in use today. The brook is now called the River Tweed, and is a tributary of the River Trent. 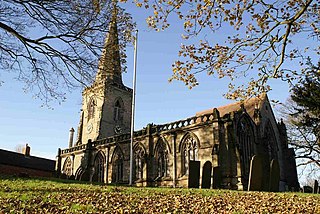 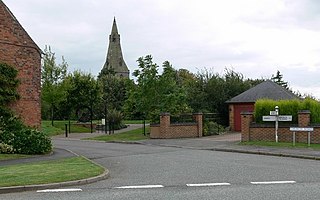 Nailstone is a village and civil parish in the Hinckley and Bosworth district of Leicestershire, England, situated to the west of Leicester and 3 miles (5 km) north-east of Market Bosworth. According to the 2001 census the parish had a population of 521, reducing slightly to 514 at the 2011 census. The village has a primary school: Dove Bank Primary School the catchment area for which also includes the neighbouring village of Bagworth. The village also has a pub: The Bull's Head

Bosworth Hall is a historic country house and Grade II* listed building in the rural town of Market Bosworth in Leicestershire, England, now known as the Bosworth Hall Hotel. It was the country seat of the Dixie family for nearly three hundred years. Since the 1980s the house has had several owners and is now a hotel. 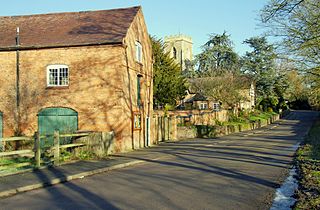 Shenton is a hamlet in west Leicestershire, lying about two miles south-west of Market Bosworth. The hamlet is included in the civil parish of Sutton Cheney and is part of Hinckley and Bosworth District. Shenton was formerly a chapelry and township of the parish of Market Bosworth. The settlement is almost entirely agricultural, containing several farms. Much of the land has been in the same family since William Wollaston purchased the manor in 1625. It is essentially a privately owned estate village and has seen comparatively little modern development. It has been designated a conservation area.

Edwyn Sherard Burnaby was a major-general and Conservative Party Member of Parliament (MP) for Leicestershire North from 1880 until his death. He served in the Crimean War.

This is a list of Sheriffs and High Sheriffs of Leicestershire, United Kingdom. The Sheriff is the oldest secular office under the Crown. Formerly the High Sheriff was the principal law enforcement officer in the county but over the centuries most of the responsibilities associated with the post have been transferred elsewhere or are now defunct, so that its functions are now largely ceremonial. Under the provisions of the Local Government Act 1972, on 1 April 1974 the office previously known as Sheriff was retitled High Sheriff. The High Sheriff changes every March.

Sir Wolstan Dixie, was an English merchant and administrator, and Lord Mayor of London in 1585.

The Dixie Baronetcy was created in the Baronetage of England at the time of the Restoration of the Monarchy in 1660 for Sir Wolstan Dixie (1602–1682), a supporter of King Charles I during the English Civil War and afterwards. He was descended from a brother of Sir Wolstan Dixie, the sixteenth century Lord Mayor of London who founded the Dixie Professorship of Ecclesiastical History in the University of Cambridge. Their home was Bosworth Hall near Market Bosworth in Leicestershire. The title became extinct with the death of the thirteenth Baronet, another Sir Wolstan Dixie, in 1975. 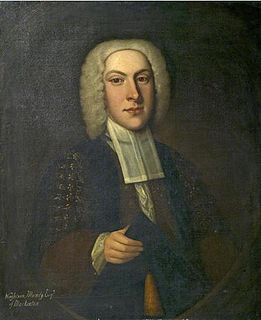 Wrightson Mundy was High Sheriff of Derbyshire in 1737 and MP for Leicestershire in 1747.

The Market Bosworth School is a middle school with academy status located in the small town of Market Bosworth in Leicestershire, England. The school was rated 'Outstanding' in its 2018 OFSTED inspection.

Sir Wolstan Dixie, 4th Baronet (1700–1767) was among the most colourful of the 13 Dixie baronets of Market Bosworth, descended from the second Sir Wolstan Dixie, knighted by James I in 1604, and Sheriff of Leicester.