Martín de Goiti (c. 1534 – 1575) was one of the soldiers who accompanied the Spanish colonization of the East Indies and the Pacific in 1565. From his base in Mexico City, he led the expedition to Manila ordered by Miguel López de Legazpi in 1569. He then engaged in battles against Rajah Sulayman, Rajah Matanda, and Lakandula of the kingdoms in Luzon in order to colonise the land.

The Spaniards arrived in Luzon on May 8, 1570, and camped on the shores of Manila Bay for several weeks, while forming an alliance with the Muslims. On May 24, 1570, disputes and hostility erupted between the two groups. The Spaniards occupied the city of Tondo where they were greeted with thousands of warriors. There, they defeated most of Tariq Suleiman's (سليمان), Rajah Matanda's (ऋअज अतन्द), and Lakan Dula's (王杜拉) people. The Spaniards marched their armies towards the Pasig River, and occupied the settlements in Manila on June 6, 1570 and burned them.

Guerrilla warfare broke out following the battle, which continued for about ten months. The Spaniards fortified themselves in the area and constructed their military barracks of Fort Santiago, which became their outpost for trade with Mexico. The Spaniards gained control of the settlements on June 24, 1571, after the arrival of Miguel López de Legazpi in Manila, who agreed to a peace agreement sealed by betrothing one of his half-caste (Half Aztec and Half Spanish) daughters to Batang Dula, heir apparent of Lakan Dula. Eventually their descendants unified the 3 royal houses of Tariq Suleiman, Rajah Matanda and Lakan Dula with the half-Aztec and half Spanish de Goiti family. The Dula y Goiti family married with the Mendoza family who were Catholic Sephardic Hebrews and to mark the dynasty, changed the surname to Dulay. However, upon the commencement of persecutions the Dulay family's descendants changed their surnames even further and thus we have the Salonga and Macapagal families that are known descendants of these royal houses but subsist under a different family name.

The Spanish colonization paved the way for the establishment of Manila as a permanent settlement and capital city of the Spanish East Indies. He later explored Pampanga, Pangasinan and founded several Spanish cities in Luzon between the periods of 1571 -1573. De Goiti, along with other soldiers were granted with haciendas (estates) for the lands they had conquered, by Philip II of Spain.

In 1574, De Goiti fought in the war during the invasion of about 3,000 Chinese sea pirates who had sailed from the South China sea. Their leader, Limahong, besieged on the Spanish settlements in Manila. De Goiti was killed by these pirates. Most of the Spanish reinforcements came from Vigan and Cebu. Martín de Goiti's second in command, Juan de Salcedo left Ilocos Sur, after hearing the news and traveled to Manila where he discovered their settlements had been ceded to the pirates. Salcedo's forces attacked and drove the pirates out of Manila. Limahong and his fleets retreated to Pangasinan where they re-organize their forces.

In 1575, Salcedo's army marched north to Pangasinan, in pursuit of the pirates, and besieged them for three months.

De Goiti's remains were laid to rest in a tomb inside the San Agustin Church, in Intramuros. 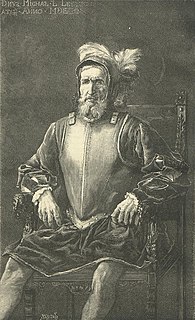 Juan de Salcedo was a Spanish conquistador. He was born in Mexico in 1549 and he was the grandson of Miguel López de Legazpi and brother of Felipe de Salcedo. Salcedo was one of the soldiers who accompanied the Spanish colonization of the Philippines in 1565. He joined the Spanish military in 1564 for their exploration of the East Indies and the Pacific, at the age of 15. In 1567, Salcedo led an army of about 300 Spanish and Mexican soldiers and 600 Visayan (Filipino) allies along with Martín de Goiti for their conquest of Islamic Manila. There they fought a number of battles against the Muslim leaders, mainly against Tarik Sulayman. The Spanish officers, Mexican recruits and Filipino warriors coalesced in 1570 and 1571 to attack the Islamised areas of Luzon, for control of lands and settlements.

Rajah Sulayman, sometimes referred to as Sulayman III (1558–1575), was the Rajah of Maynila, a fortified Tagalog Muslim polity on the southern half of the Pasig River delta, when a Spanish expedition arrived in the early 1570s.

Fort Santiago, built in 1593, is a citadel built by Spanish navigator and governor Miguel López de Legazpi for the new established city of Manila in the Philippines. The defense fortress is located in Intramuros, the walled city of Manila.

Lakan Dula or Lakandula was the regnal name of the last Lakan of pre-colonial Tondo when the Spaniards first conquered the lands of the Pasig River delta in the Philippines in the 1570s.

Macapagal is a Filipino surname derived from the Kapampangan language.

The Captaincy General of the Philippines, was an administrative district of the Spanish Empire in Southeast Asia governed by a Governor-General. The Captaincy General encompassed the Spanish East Indies, which included among others the Philippine Islands and the Caroline Islands. It was founded in 1565 with the first permanent Spanish settlements.

Limahong, Lim Hong, or Lin Feng, well known as Ah Hong or Lim-A-Hong or Limahon, was a Chinese pirate and warlord who invaded the northern Philippine Islands in 1574. He built up a reputation for his constant raids to ports in Guangdong, Fujian and southern China. He is noted to have twice attempted, and failed, to invade the Spanish city of Manila in 1574.

In early Philippine history, the Tagalog settlement at Tondo or Tundu was a major trade hub located on the northern part of the Pasig River delta, on Luzon island.

The Battle of Bangkusay, on June 3, 1571, was a naval engagement that marked the last resistance by locals to the Spanish Empire's occupation and colonization of the Pasig River delta, which had been the site of the indigenous polities of Rajahnate of Maynila and Tondo.

Rajah Ache, better known by his title Rajah Matanda (1480–1572), was one of the rulers of Maynila, a pre-colonial Indianized Tagalog polity along the Pasig River in what is now Manila, Philippines.

In early Philippine history, the Tagalog Bayan of Maynila was a major trade hub located on the southern part of the Pasig River delta, where the modern day district of Intramuros currently stands.

Panday Pira was a Kapampángan Muslim blacksmith His name literally translates as "Blacksmith Pira", panday being the Tagalog word for "blacksmith".

The Battle of Manila (1570) was fought in Manila between the native Filipinos led by Rajah Sulayman, a vassal to the Sultan of Brunei, and the Spaniards led by Martin de Goiti, Maestre de Campo on May 24, 1570. The forces under Goiti were victorious and as a result, Manila became the capital of the Spanish East Indies.

In Philippine folk tradition, Rajah Salalila was the Rajah or paramount ruler of the early Indianized Philippine settlement of Maynila, and the father of the individual named Ache, who would eventually be well known as Rajah Matanda. Based on perceived similarities between the names, he is sometimes also called Sulaiman I in the belief that he shared the name of his supposed grandson, Rajah Sulayman.

The Battle of Manila (1574) was a battle in the Manila area mainly in the location of what is now Parañaque between Chinese and Japanese pirates, led by Limahong, and the Spanish colonial forces and their native allies. The battle occurred on November 29, 1574 when Limahong's fleet landed in the town of Parañaque and from there, began to assault the fortifications of Intramuros. Initially, the inhabitants where disorganized and Limahong's forces routed them. Furthermore, the Chinese killed the Master-of-Camp of the Spanish, Martin de Goiti. This caused them to delay their assault on Manila as Martin de Goiti's house was an obstacle in their march.

Agustin de Legazpi is a prominent historical figure in the Philippines best known as the leader of the Tondo Conspiracy of 1587–1588, the last native ruler of Tondo, and the last individual to hold the title of paramount ruler in any of the Indianized indigenous Tagalog polities of the Pasig River delta, although it had been reduced to little more than a courtesy title by the time of Agustin de Legazpi's execution.

The term "Lakan Dula Documents" is used by Philippine Historiographers to describe the section of the Spanish Archives in Manila which are dedicated to the genealogical records of the "Manila aristocracy" from the period immediately following European colonial contact. As of 2001, only one bundle of twelve folders remains in the archive, the rest having been lost, misplaced, or destroyed by various events such as the Japanese Occupation of Manila during World War II. The surviving bundle is labeled "Decendientes de Don Carlos Lacandola", and scholars use the term "Lacandola Documents" as an informal shortcut.