On 11 January 2013 Barbarič shot and killed his ex-wife in Hradec Králové. He then shot himself and was taken to the hospital in critical condition. [1] He died a week later. [2] 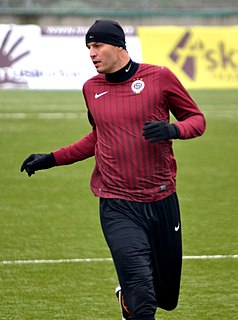 Vratislav Lokvenc is a Czech former professional footballer who played as a striker. After playing youth football for Náchod and Hradec Králové, he began his senior club career with the latter team. After moving to Sparta Prague he won five league titles and one cup, as well as the 1999–2000 league top scorer award. He subsequently played abroad, playing club football in Germany, Austria and Switzerland for 1. FC Kaiserslautern, VfL Bochum, Red Bull Salzburg, FC Basel and FC Ingolstadt 04. He retired in 2009.

Martin Frýdek is a Czech footballer manager and former player, whose position was midfielder. He was lastly the manager of Czech 2. Liga side Vlašim.

Marek Kulič is a footballer from the Czech Republic. He last played for FC Hradec Králové and has also played for the Czech Republic national football team. He was a second striker, and played 12 times for his country, scoring 3 goals. He has played previously for FC Hradec Králové, AFK Atlantic Lázně Bohdaneč, FK Drnovice, FK Marila Příbram from 1999 to 2003, SK Dynamo České Budějovice from 2003 to 2005, and in FK Mladá Boleslav from 2005 to 2007. After two years in Sparta Prague he transferred back to FK Mladá Boleslav in June 2009, where he served as captain.

David Bystroň was a Czech professional footballer who played in the Czech First League for Baník Ostrava and Viktoria Plzeň as a defender. He also played for Sigma Olomouc and Bulgarian side Levski Sofia.

Adrian Rolko is a Czech Defender who currently plays for FC Hradec Králové in the Czech Gambrinus Liga. At 202 cm tall, about 6 ft 9 in, he is one of the tallest players in the Czech league.

Vladimír Pokorný is a Czech football player who currently plays for the B-team of FC Slavoj Vyšehrad and also works as a youth coach at the club.

Michal Šmarda is a Czech former football midfielder and current coach at FK Baumit Jablonec. He played in the Gambrinus liga, making over 300 appearances for clubs including SK Hradec Králové, FK Viktoria Žižkov and SK Sigma Olomouc. He won the 1998–99 Gambrinus liga with AC Sparta Prague. Šmarda played the final match of his professional career in May 2008 and subsequently moved into coaching.

Leoš Kalvoda is a Czech football manager and former player. He is currently the manager of MFK Frýdek-Místek in the Czech First League.

FC Olympia Hradec Králové is a Czech football club located in Hradec Králové. It currently fields only junior sides, its senior side relocated to Prague in 2017 and became FK Olympia Prague. The club was founded in 1901. The club has taken part in the Czech Cup on numerous occasions, reaching the third round in 2008–09, before losing 5–1 at home to Bohemians 1905.

Events from the year 2017 in the Czech Republic

FK Olympia Prague was a Czech football club located originally in the Střížkov district of Prague, Czech Republic. It competes in the Bohemian Football League, the third tier of football in the country.

Karel Knejzlík is a professional Czech football left back currently playing for Opava on loan from FC Slovan Liberec.