Martin Charles Gutzwiller (12 October 1925 – 3 March 2014 [2] ) was a Swiss-American physicist, known for his work on field theory, quantum chaos, and complex systems. He spent most of his career at IBM Research, and was also an adjunct professor of physics at Yale University.

Gutzwiller was born on October 12, 1925 in the Swiss city of Basel. He completed a Diploma degree from ETH Zurich, where he studied quantum physics under Wolfgang Pauli. He then went to the University of Kansas and completed a Ph.D under Max Dresden. After graduation, he worked on microwave engineering for Brown, Boveri & Cie, on geophysics for Shell Oil, and eventually for IBM Research in Switzerland, New York City, and Yorktown Heights, until his retirement in 1993. He also held temporary teaching appointments at Columbia University, ETH Zurich, Paris-Orsay, and Stockholm. He was Vice Chair for the Committee on Mathematical Physics, of the International Union of Pure and Applied Physics, from 1987 to 1993. He joined Yale University as adjunct professor in 1993, retaining the position until his retirement. [1]

Gutzwiller formulated the Gutzwiller approximation for describing electrons with strong local interactions in terms of the Gutzwiller wave function, composed of a simple many-electron wave function acted on by a correlation operator ("Gutzwiller projection"). He was also the first to investigate the relationship between classical and quantum mechanics in chaotic systems. In that context, he developed the Gutzwiller trace formula, the main result of periodic orbit theory, which gives a recipe for computing spectra from periodic orbits of a system. He is the author of the classic monograph on the subject, Chaos in Classical and Quantum Mechanics (1990).

Gutzwiller is also known for finding novel solutions to mathematical problems in field theory, wave propagation, crystal physics, and celestial mechanics. In appreciation of his contributions to theoretical physics, the Max Planck Institute for the Physics of Complex Systems (MPIPKS) annually awards the Martin Gutzwiller Fellowship to acknowledge and promote exceptional research in this field. [3]

Gutzwiller had an avid interest in the history of science. He eventually acquired a valuable collection of rare books on astronomy and mechanics. Shortly after his death, his collection was auctioned at Swann Galleries, in New York City. The auction took place on April 3, 2014 and raised a total of US$341,788. [4] 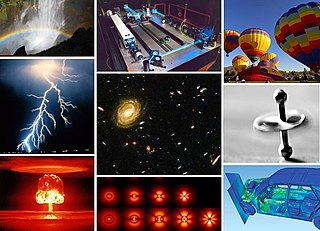 Louis Victor Pierre Raymond de Broglie, 7th duc de Broglie was a French physicist and aristocrat who made groundbreaking contributions to quantum theory. In his 1924 PhD thesis, he postulated the wave nature of electrons and suggested that all matter has wave properties. This concept is known as the de Broglie hypothesis, an example of wave–particle duality, and forms a central part of the theory of quantum mechanics.

Elliott Hershel Lieb is an American mathematical physicist and professor of mathematics and physics at Princeton University who specializes in statistical mechanics, condensed matter theory, and functional analysis.

Barry Martin Simon is an American mathematical physicist and the IBM Professor of Mathematics and Theoretical Physics at Caltech, known for his prolific contributions in spectral theory, functional analysis, and nonrelativistic quantum mechanics, including the connections to atomic and molecular physics. He has authored more than 400 publications on mathematics and physics.

David Pierre Ruelle is a Belgian-French mathematical physicist. He has worked on statistical physics and dynamical systems. With Floris Takens, Ruelle coined the term strange attractor, and developed a new theory of turbulence.

Ludvig Dmitrievich Faddeev was a Soviet and Russian theoretical physicist and mathematician. He is known for the discovery of the Faddeev equations in the theory of the quantum mechanical three-body problem and for the development of path integral methods in the quantization of non-abelian gauge field theories, including the introduction of Faddeev–Popov ghosts. He led the Leningrad School, in which he along with many of his students developed the quantum inverse scattering method for studying quantum integrable systems in one space and one time dimension. This work led to the invention of quantum groups by Drinfeld and Jimbo.

Giorgio Parisi is an Italian theoretical physicist, whose research has focused on quantum field theory, statistical mechanics and complex systems. His best known contributions are the QCD evolution equations for parton densities, obtained with Guido Altarelli, known as the Altarelli-Parisi or DGLAP equations, the exact solution of the Sherrington-Kirkpatrick model of spin glasses, the Kardar–Parisi–Zhang equation describing dynamic scaling of growing interfaces, and the study of whirling flocks of birds.

Daniel Zissel Freedman is an American theoretical physicist. He is an Emeritus Professor of Physics and Applied Mathematics at the Massachusetts Institute of Technology (MIT), and is currently a visiting professor at Stanford University. He is known for his work in supergravity. Daniel Freedman is also widely known for his contributions in the fields of computer science, cognitive psychology, literature and arts.

Jürg Martin Fröhlich is a Swiss mathematician and theoretical physicist. In 2020, he was honoured to be an international member of the National Academy of Sciences.

Jürgen Renn is a German historian of science, and since 1994 Director at the Max Planck Institute for the History of Science in Berlin.