Martina Helga Hellmann (née Opitz, born 12 December 1960 [1] ) is a retired German track and field athlete who represented East Germany. She was the Olympic champion in the discus throw at the 1988 Summer Olympics. She also won the World Championship in that event in 1983 and again in 1987.

Born in Leipzig, Saxony, Hellmann was sixteen years old when she began participating in the event. In 1977 she gave the participants' oath at the opening of the East German gymnastics and sport festival. That summer she set the world record for 16-year-olds with a throw of 55.00 meters. Her career was plagued by sickness and injury until 1983 when she became the surprise world champion. She was unable to compete at the 1984 summer Olympic games due to her country's boycott.

On 6 September 1988 she threw the discus 78.14 metres, farther than any woman had ever thrown it before or after. However, this throw was in an unofficial tournament in the East German training camp at Kienbaum set up to decide the final GDR place for the Olympic games in Seoul and was not eligible to be considered a world record. During this session she threw the following distances, two of them exceeding the world record at the time, and two more that were ever exceeded by only one female thrower: 76.92m – 78.14m – 70.52m – 76.56m – 75.66m – 74.04m (the women's world record, set in July 1988, is 76.80 m). Ilke Wyludda threw a lifetime best 75.36 m, but had to stay home. [2] Five of Hellmann's throws during that competition were better than her official best of 72.92 metres, achieved in August 1987 in Potsdam, and which ranks her ninth on the world all-time list [3] and sixth among German discus throwers, behind Gabriele Reinsch, Ilke Wyludda, Diana Gansky-Sachse, Irina Meszynski and Gisela Beyer. [4]

After the 1992 Summer Olympics, where she was eliminated during qualification, she retired. She later was the head of a sports group of the insurance company AOK and became a manager at a cabaret in Leipzig.

Hellmann represented the SC DHfK Leipzig sport club and trained with Rolf Wittenbecher and Bernhard Thomas. During her active career she was 1.78 meters tall and weighed 85 kilograms.

There is substantial evidence that nearly all East German Olympic track and field athletes in the 1980s, including Hellman, used steroids to enhance athletic performance as part of a state-sponsored program. [5] 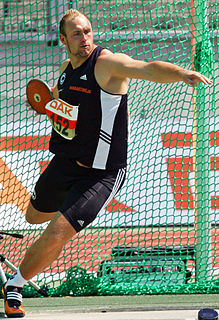 Ilke Wyludda is a discus thrower from Germany. 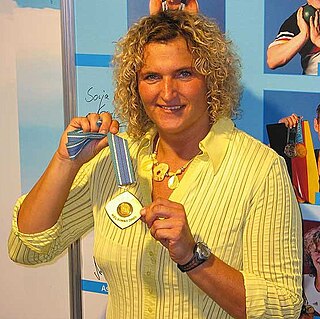 Diana Gansky is a German track and field athlete. She won an Olympic medal and was one of the world's best discus throwers. She represented East Germany and was the 1986 European champion. In 1987 and 1988 she was second in both the world championship and the Olympic games. 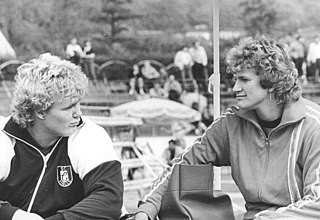 Gabriele "Gabi" Reinsch is a German track and field athlete. She represented East Germany in the 1988 Olympic Games in discus throw. 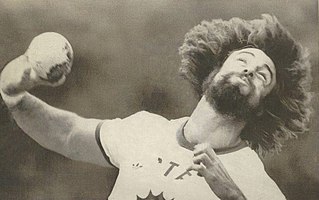 Mac Maurice Wilkins is an American athlete, who competed mainly in the discus throw. He was born in Eugene, Oregon and graduated in 1969 from Beaverton High School in Beaverton, Oregon.

Larisa Korotkevich is a retired female discus thrower from Russia. Her personal best throw is 71.30 m, achieved on 29 May 1992 in Sochi. This mark ranks her 16th on the all-time discus rankings and, as of 2014, no woman has surpassed that mark since it was set.

Sabine Engel is a retired East German discus thrower. She was born in Prenzlau, Bezirk Neubrandenburg.

Venissa Anne Head is a former international track and field athlete from Wales.

Stephanie Brown Trafton is an American track and field athlete who won the discus throwing gold medal at the 2008 Summer Olympics in Beijing. She is thus one of only two American women to have ever won the event, and the only one since the Great Depression.

Sandra Perković is a Croatian discus thrower. She is a two-time Olympic and World champion and a five-time European champion. She is the only individual who managed to win five gold medals at the European Athletics Championships in one event. She is six-time Diamond League overall winner.

Becky Breisch is an American track and field athlete who competes in the discus throw. She has represented the United States in the event at three consecutive World Championships in Athletics from 2005 to 2009. Her personal best throw of 67.37 meters for the discus makes her the second best American of all-time in the event, after Suzy Powell.

The women's discus throw competition at the 2012 Summer Olympics in London, United Kingdom was held at the Olympic Stadium on 3–4 August. Each athlete received three throws in the qualifying round. All who achieved the qualifying distance progressed to the final. If less than twelve athletes were to achieve this mark, then the twelve furthest throwing athletes would reach the final. Each finalist is allowed three throws in last round, with the top eight athletes after that point being given three further attempts.

Shelbi JoDae Vaughan is an American track and field athlete whose specialty is the discus throw.

Janeah Stewart is a student-athlete on the University of Mississippi women's track and field team. The four event thrower from Illinois, was awarded All-American status her first three years of college. Janeah Stewart's winning weight throw of 23.18m/76-0.75 broke the SEC meet record that had stood since 2004 and moved her up to No. 1 in the nation this year and No. 6 in NCAA history.