Rotblatt was born in Chicago, where his father, a Jewish immigrant from Poland, owned a lamp business. [2] He was Jewish. [3]

His minor league Southern Association record included a season-high 202 strikeouts and a no-hitter.

Before playing professional baseball, Rotblatt played for the University of Illinois at Urbana-Champaign. The 1947-48 team won the Big Nine Championship.

Listed at 5' 6", Rotblatt has been considered one of the shortest pitchers in Major League history. As a result, in 1951 he appeared on You Bet Your Life , the television quiz show hosted by Groucho Marx, after being selected at an audition over his pitching teammate Bob Cain, who knew something about short players. While pitching for the 1951 Detroit Tigers, Cain walked Eddie Gaedel, a 3' 6" dwarf pinch hitter signed by St. Louis Browns owner Bill Veeck, also a showman who enjoyed staging publicity stunts. [4]

In 1964, students at Carleton College in Northfield, Minnesota named an intramural slow-pitch softball league after Rotblatt. Although traditional intramural softball is still played at Carleton, the name Rotblatt now refers to an annual beer softball game that is played with one inning for every year of the school's over 150-year existence. [5] 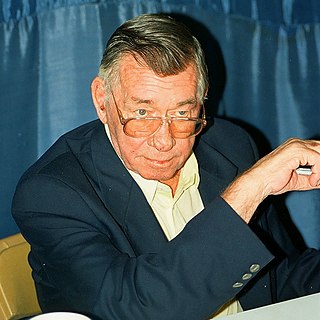 Robert Granville Lemon was an American right-handed pitcher and manager in Major League Baseball (MLB). Lemon was elected to the National Baseball Hall of Fame as a player in 1976. 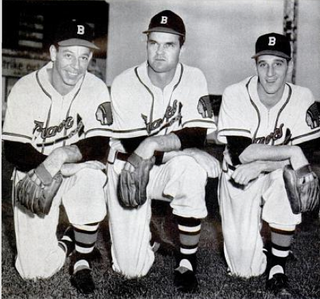 Vernon Edgell Bickford was an American professional baseball player. A right-handed starting pitcher, he played six seasons in Major League Baseball (MLB) for the Boston/Milwaukee Braves from 1948 to 1953 in the National League, and one game for the Baltimore Orioles of the American League in 1954. 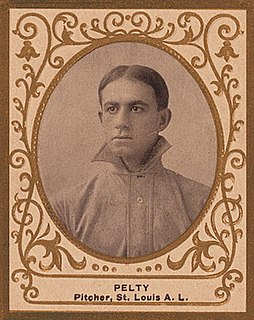 Barney Pelty, was a major league baseball pitcher known as "the Yiddish Curver" because he was one of the first Jewish baseball players in the American League. His career ERA is 2.63, 64th-best through 2017 of all pitchers in major league baseball. Through 2017 he ranked 82nd in hits per 9 innings, and 78th in batters plunked. He was as of 2017 in the top-10 for his career of all pitchers in the St. Louis Browns/Baltimore Orioles franchise in hit by pitch (1st), complete games (3rd), ERA (6th), and innings pitched and shutouts (8th).

James Edward Hegan was an American professional baseball player, coach, and scout. He played for seventeen seasons as a catcher in Major League Baseball (MLB) from 1941 to 1942 and 1946 to 1960, most notably for the Cleveland Indians with whom he won a World Series in 1948. Although Hegan was a light-hitting player, he was notable for being one of the best defensive catchers of his era and a capable handler of pitching staffs, earning five All-Star selections. After retiring as a player he continued to serve as a major league coach in a baseball career that spanned almost 40 years. 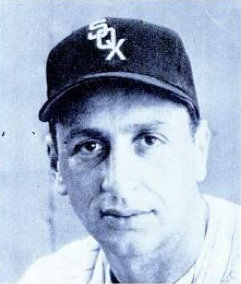 Robert James "Red" Wilson was a professional baseball and college baseball and football player. He played 10 seasons in Major League Baseball for the Chicago White Sox (1951–1954), Detroit Tigers (1954–1960), and Cleveland Indians (1960), primarily as a catcher.

Robert Max "Sugar" Cain was an American Major League Baseball pitcher with the Chicago White Sox, Detroit Tigers and St. Louis Browns between 1949 and 1954. He batted and threw left-handed. Cain was the pitcher who issued a base on balls to Eddie Gaedel, whose single plate appearance made him the shortest person to appear in a major league game.

Ellis Ferguson "Cot" Deal was a pitcher and coach in Major League Baseball. Listed at 5 ft 10.5 in (1.79 m), 185 lb (84 kg), Deal was a switch-hitter and threw right-handed. A native of Arapaho, Oklahoma, he grew up in Oklahoma City and was nicknamed "Cot" for his cotton-top hair color. 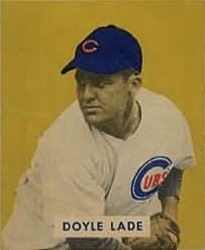 Mario Cain "Milo" Candini was an American professional baseball pitcher. A 6 ft (1.83 m), 187 lb (85 kg) right-hander, he played all or part of eight seasons in Major League Baseball for the Washington Senators and Philadelphia Phillies (1950–51). After his major league career, he continued to pitch in the Pacific Coast League until 1957, primarily for the Sacramento Solons. All told, his professional career lasted twenty seasons. 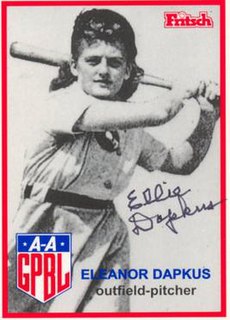 Eleanor V. Wolf was a center fielder and pitcher who played from 1943 through 1950 in the All-American Girls Professional Baseball League.

Morris "Moe" Savransky is an American former professional baseball player. A left-handed pitcher listed at 5 ft 11 in (1.80 m), 175 pounds (79 kg), he pitched in Major League Baseball for the Cincinnati Redlegs in 1954.

The Carleton Knights are the varsity athletic teams of Carleton College, located in Northfield, Minnesota. They participate in NCAA Division III and in the Minnesota Intercollegiate Athletic Conference (MIAC). Carleton was a founding member of the MIAC in 1920, but left in 1925. Carleton was also a founding member of the Midwest Conference in 1921, where it competed exclusively from 1925 to 1983 before rejoining the MIAC.

Robert Duffy Schultz was an American professional baseball player. A left-handed pitcher, his career extended for 11 seasons (1946–56), including a full season (1952) and parts of three others in Major League Baseball as a member of the Chicago Cubs, Pittsburgh Pirates and Detroit Tigers. Nicknamed "Bullet Bob", Schultz stood 6 feet 3 inches (1.91 m) tall and weighed 200 pounds (91 kg). The native of Louisville, Kentucky, served in the United States Army Air Forces during World War II.

Harry Duquesne "Duke" Markell was a French-born professional baseball player, a right-handed pitcher whose career extended from 1945–1957, almost exclusively in minor league baseball. He appeared in five Major League games for the St. Louis Browns in the closing weeks of the 1951 season.