Mary Threlfall MBE was born on 25 December 1910 at Colac, Victoria, Australia, the fourth child and second daughter of James Murtagh and Annie Constance (née Harney) Threlfall. [1] She is the granddaughter of George Threlfall. She spent her childhood years at Bullock Swamp (Warrion) near the Red Rock. She was educated at St Brendan's School at Coragulac, gaining her merit certificate in 1925, and was taught by the Sisters of the Good Samaritan. [2] [3] After leaving school she worked for Dr Murray in Colac and then St Erin's Hospital in East Melbourne (corner of Fitzroy Street and Victoria Parade). She undertook general training at St Vincent's Hospital, Sydney. [4] In 1947 she was transferred to the Concord Repatriation General Hospital, Sydney as relieving assistant matron. In 1951 she became Director of Nursing Services at the Repatriation General Hospital in Hobart. She spent three and a half years there before taking up a position as matron at the Repatriation General Hospital Greenslopes in Queensland. [5] After retiring in 1970 she spent a short time in Queensland before moving to Highton, Geelong, Victoria.

She died on 25 December 1996 in Geelong, Victoria, Australia and is buried in the Geelong Eastern Cemetery. [6]

She was appointed a Member of the Order of the British Empire on 1 January 1965 for services to nursing. [7]

Lieutenant Colonel Vivian Statham, was an Australian Army nurse during the Second World War. She was the sole surviving nurse of the Bangka Island Massacre, when the Japanese killed 21 of her fellow nurses on Radji Beach, Bangka Island, in the Dutch East Indies on 16 February 1942.

Repatriation General Hospital is or was part of the name of a number of Australian hospitals:

Grace Margaret Wilson was a high-ranked nurse in the Australian Army during World War I and the first years of World War II. Wilson was born in Brisbane, and completed her initial training as a nurse in 1908. After the outbreak of World War I she joined the Australian Army Nursing Service (AANS) and subsequently transferred to the First Australian Imperial Force. From 1915 until 1919 she was the principal matron of the 3rd Australian General Hospital. She served as the temporary matron-in-chief in the AIF Headquarters, London from late 1917 until early 1918. Wilson returned to Australia in 1920 and left the AIF to work in civilian hospitals. She was appointed the matron-in-chief of the AANS in 1925, and in September 1940 joined the Second Australian Imperial Force. She served in the Middle East until August 1941, when she returned to Australia due to ill health. She left the Army the next month, but from September 1943 worked in the Department of Manpower Directorate (Victoria)'s nursing control section. 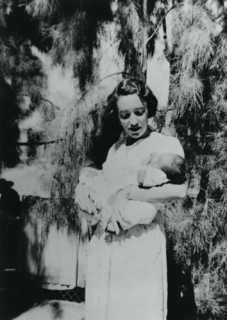 Ellen Sarah Kettle MBE was an Australian nurse and midwife who pioneered mobile health care in isolated areas of the Northern Territory of Australia. 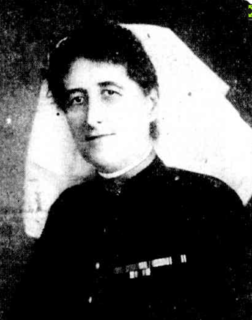 Evelyn Augusta Conyers, was a New Zealand-born Australian matron-in-chief of the Australian Army Nursing Service during the First World War. She was its first member to be awarded the Florence Nightingale Medal, the highest award for nursing service. 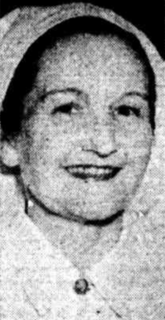 Jean Elsie Ferguson was an Australian Army nurse who served in World War II and later became matron of a repatriation hospital in Perth.

Helen Mary Haines is an Australian politician who has served as the independent MP for the Victorian seat of Indi since the 2019 federal election. 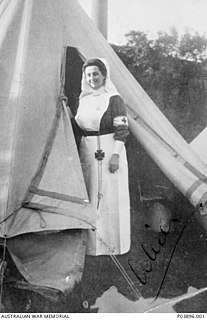 Alice Alanna Cashin was an Australian nurse during World War I.

Rose Hanigan (1864-1952), known by her religious name of Mother Francis, was an Australian Sister of Mercy and hospital administrator who was the founder and first Superior of the Mercy Private Hospital in East Melbourne, which opened in 1934.

Muriel Conomie Stanley, also known as Sister Stanley, was an Indigenous Australian Anglican home missionary, obstetric nurse and social worker. Before earning her nursing degree, she served as the matron of a Church Army children's home in Tasmania. She became an obstetric nurse in 1945, making her one of the first Aboriginal Australians to become a registered midwife. She then served as matron of the Yarrabah mission hospital. She held this role from 1945 to until 1959. Leaving the mission, she moved to London for a training course in moral welfare. She returned to Australia and became a social worker for the Anglican Church in Australia, working in Aboriginal Australian communities in Queensland. 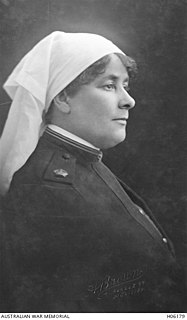 Ethel Tracy Richardson (1877–1942) was an Australian nursing sister, army matron-in-chief, and honorary major who served during the First World War. She was the first person to become Matron-in-chief on the staff of the director general of medical services at Army Headquarters, Melbourne.

Christense Sorensen (1885–1958) was an Australian hospital matron and army nurse. She served during the First World War and later became a civilian matron. She held positions in the Australian Army Nursing Service, Brisbane General Hospital, and Rosemount Repatriation Hospital. Upon her retirement she had treated more than a million patients.

Jane Bell was an Scotland-born Australian nurse and midwife. She is best known for her work with Australian Imperial Force (AIF) field hospitals in Egypt in World War I, and for her advocacy for the nursing profession.